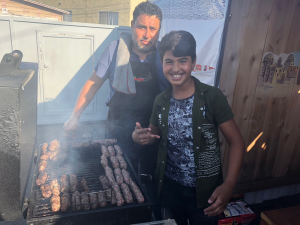 June 28, 2018 (El Cajon) -- Community-oriented business leaders from across the County descended on Suri Restaurant in El Cajon on Wed., June 20.  Business for Good SD partnered with the restaurant for World Refugee Day. During their monthly mixer, the entrepreneurs and local leaders ate Syrian food masterfully prepared by the restaurant’s staff, comprised entirely of refugees.

The event was aimed at helping some of the 230 business leaders in the group make connections while also highlighting a refugee business. One of the five committees at Business for Good is immigration, which is why the mixer fit the organization’s purpose.

The chair of Business for Good, Mikey Knab, said “In the immigration committee, they operate from a simple foundational belief that immigrants give more than they take. That’s doubly true for refugees. A recent study says that refugees contribute $21,000 or more over twenty years than they take in assistance, which is counterintuitive to some of the narratives you might here by those who are afraid of refugees. They’re more likely to be entrepreneurs which means they’re more likely to employ people and create jobs that adds to taxable income.”

Knab also pointed out immigrants are also able to boost the work force as the aging native-born population retires. “We’ve seen since World War Two, every time there’s a wave of refugees, there’s an increase of economic activity where that happens,” he said. 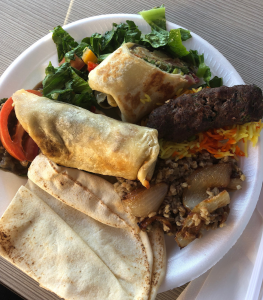 The goals of Suri owner Abed Keddo already align with what Business for Good was set up to do, as the restaurant serves refugee employees by being a successful business.

Keddo came to the U.S. as a student from Syria decades ago, and began working closely with the International Rescue Committee a few years ago when waves of Syrian refugees fleeing the ongoing war began immigrating to San Diego.

He helped with simple daily tasks like providing rides, translating at doctor’s appointments, helping people find apartments, and finding used furniture. Soon, he was looking for any labor opportunities for the refugees. Many wanted to provide for families by cooking and selling food out of their homes, which is not allowed by the FDA.

Keddo opened Suri as a way for refugees to get on their feet. He currently employs nine people on a part-time basis. According to him, the refugees are passionate about cooking and have plenty of experience. They are learning how to run their own business and practice their English skills. “The language is a big barrier, and since this is owned by a Syrian speaking the same language, that fear factor is no longer there of not being able to communicate,” Keddo said. He encourages them to speak English as much as possible, but is also able to step in and help translate when necessary.

The El Cajon location was chosen so it was within walking distance for the employees, but in a city with little disposable income the decision has also made Suri struggle to find profitability in the 13 months since it opened. 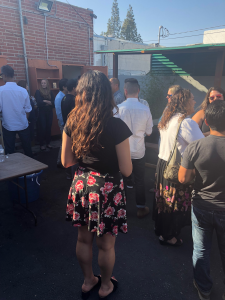 Keddo’s work to assist refugees comes amid a surge in animosity towards the vulnerable community. Under the Trump Administration, admissions of refugees have seen a sharp decline. In the first months of 2018, only 11 Syrian refugees were allowed to enter the U.S. compared to 15,000 in 2016.

“Since President Trump took over, a lot of refugees honestly are scared, thinking they can be kicked out anytime or sent back where they came from. We assure them it’s just a temporary phase the government is going through,” Keddo said.

While he encourages them to continue living freely in the United States, the policy has left many families split around the world. Keddo said, “They left family members behind, and they’re not united anymore and they don’t know and they’re not sure when they’ll be reunited again.”

Keddo’s best cook is waiting for her eldest daughter to be admitted. The two talk on the phone every day, and she hopes to be resettled in the U.S. with her mother soon so those conversations can be in person.

Keddo had strong words for the people perpetuating the fear that divides the mother and daughter across borders. “There is a big sect of Americans against bringing refugees here, and I have a message for them: that fear is based on, part of it is based on ignorance, not knowing there is a lot of red tape refugees have to go through to get here by the F.B.I. and UN approvals and so many approvals they go through and do background checks and do double background checks before they make sure this person is good enough to bring here,” he said.

For now, the cooks provide traditional Syrian food to anyone who walks through the doors of Suri Restaurant and Market. Keddo said, “This place opened for a good cause and I hope your readership listens to you and comes here and supports it.”

Suri Restaurant is located at 461 El Cajon Blvd. in El Cajon.  View their menu and get more details at the website:  https://www.surielcajon.com/

I should get over there and have something to eat. Try a new food.