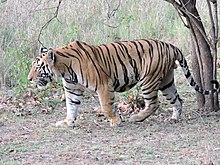 Update July 1, 2018 8:40 p.m. Brush Fire Party Line’s Dennis Richardson interviewed Boulevard resident Christopher Mora, who lives on Jewel Valley Road. In the video, Mora says his mother received a text from a mutual friend who reported seeing the tiger near Benny’s Garage close by.  Mora says he stopped by a Border Patrol station yesterday and asked if the tiger story was a hoax, and that an agent told him the story is real. This conflicts with a Sheriff media spokesperson this morning who stated that no sightings of the tiger have been reported other than by undocumented immigrants apprehended.

July 1, 2018 (Boulevard) – Reports of a possible tiger in East County have been made by undocumented immigrants picked up by the Border Patrol, dispatchers at the Sheriff’s office and Border Patrol have confirmed to East County Magazine. Reports of large paw prints have been reported by multiple residents in the Boulevard area and recreational enthusiasts in nearby McCain Valley report hearing what they believed sounded like a tiger growl.

But the only reported photo thus far appears to be a hoax, while eye witness accounts remain unconfirmed.

A group of undocumented immigrants taken into custody by Border Patrol first reported seeing the tiger but it was unclear whether they actually saw one and if so, which side of the border it was on, Karla Menzies at the Sheriff’s department today informed ECM. She said there have been no other sightings and also debunked a rumor that a deputy saw the animal. "There have been no sightings by any deputy," she stated.

A photo purporting to show a tiger crossing the border at Tecate, shown on radar, appears to be a hoax, since the same photo appeared  in a publication in India, the Deccan Chronicle, back in February.

Border Patrol confirmed however that very large tracks seen near a deer carcass in Boulevard are being investigated by the California Fish & Wildlife Department. Several posters in online forums also claim to have tracks on their property that they believe appear larger than a typical mountain lion.

ECM has called Calif. Fish and Wildlife but have not yet heard back.

Other sources have indicated traps have been put out in Jewel Valley as a precaution but thus far there has been no confirmation of any tiger in the area.

Drug cartels have been known to use tigers and other exotic cats to guard drug stashes and to smuggle drugs into the U.S. in hidden compartments under tiger cages in the past.  Also in recent months, tiger cubs have been seized at border crossings from people who obtained them in Tijuana, Mexico.  Another tiger fell from a balcony in Tijuana and was injured.  The owner of a private ranch in Tecate that kept exotic animals in 2013 told the Reader about a tiger that escaped, but was shot.

So it’s not inconceivable that an adult tiger could have escaped captivity and crossed the border (the border fence ends in rugged terrain in Jacumba, just east of Boulevard), but there’s thus far no evidence to confirm  sighting reports, and the only purported photo lacks credibility.

If you have credible information. eyewitness accounts or photos,  or evidence please let us know at (619) 698-7617 or editor@eastcountymagazine.org.

Apparently many of us do not possess any critical thinking skills whatsoever . We don't see anything on the news, nothing on the radio, no flood of TV news trucks ,all the things that would happen if there was A BENGAL TIGER LOOSE in southern California! Instead we convinced because well... a shirtless fat guy says his mom got a text from a friend who saw it ......
Protect my life at any cost! Dispatch the attacker, run, whatever you can. Although it would be very difficult to defend oneself against a large wild animal such as a tiger or even a bear which is determined to cause harm. I do believe that a tiger (and other unknown animals) could be around the U.S.. Exotic animal collectors have been importing different species for many, many years. No way to determine what type of dangerous, or invasive critters are already here.
If I, or anyone, should come face to face with a starving tiger, what are our options? Can I invoke the right of self-defense? Or will I end up in jail like those bloaks up in Laguna Rec a few years ago who encountered a menacing ML?