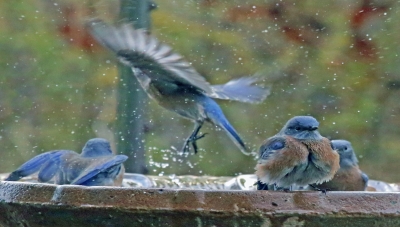 July 25, 2018 (San Diego) -- Our local wildlife species have evolved over many millions of years, adapting to some amazing extremes of weather where drought is par for the course. That means they can withstand pretty much anything Mother Nature delivers, right? Not necessarily, and especially not when combined with the incredibly high rate of ecological change to which  modern day global warming is exposing them. 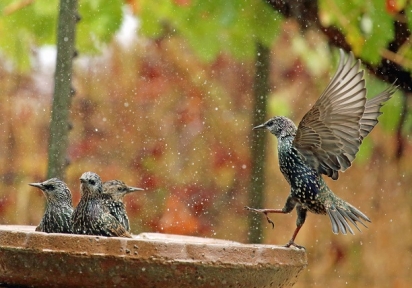 The ability of wild animals to withstand weather extremes depends not only on the species but also on many other variables like the degree and duration of extreme conditions, age, the health of their immune systems, the condition of local habitats, food abundance, and how many toxins they may have bioaccumulated thanks to synthetic pollutants we humans have made ubiquitous in the environment.

Let’s face it, global warming is hurting wildlife in ways we have yet to fully comprehend. But aside from reducing our carbon footprint, is there anything we can do to help animals now, in times of drought and severe heat? Most definitely. In fact, as climate change becomes an increasingly existential problem, a little leg up from us can tip the balance between life and death for our wild neighbors. 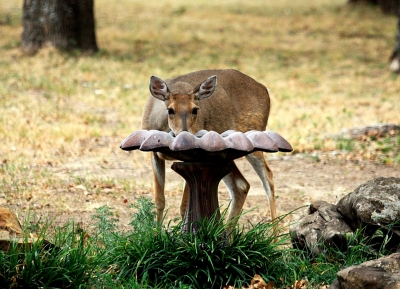 Think about it: whether walking in an urban park or hiking the backcountry, where do you see the most wildlife? Where there is water. Water is life, and never more so than when we have endless days of record breaking temperatures. Water scarcity is a survival issue for wildlife on a daily basis; a relatively tiny amount of water can play a huge role in thermoregulation.

Not having to expend a lot of energy to find or access water can dictate whether an individual survives an extreme heat event or not. During such times many animals die not so much from metabolism-related thirst, but from hyperthermia; not unlike when some humans succumb to heat stroke. For wildlife this can be avoided with readily available water to drink or simply the increased humidity of a microhabitat.

As East County residents know, recent temperatures have been brutal, reaching triple digits for days in a row. To help my free-ranging chickens cope, I provide small wading pools to stand in; they take full advantage of them as do the rabbits, roadrunners, bluebirds, orioles, lizards, honeybees, and a host of butterflies managing to survive in this heat. 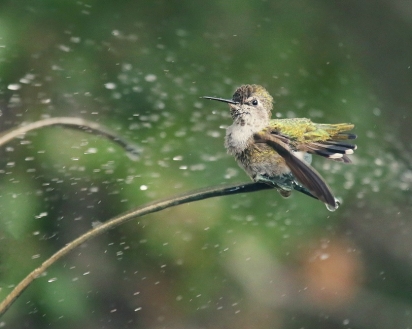 Thanks to technology like air conditioning, indoor heating, and the latest fancy gear from REI, we humans have a hard time relating to the fact that even one degree beyond the evolved limits of tolerance can mean death for animals. For instance, even though most birds have a high body temperature – around 105 degrees – prolonged ambient temperatures above that can quickly lead to heat stroke and death for many avian species if they are lacking adequate hydration or a cool, moist haven to rest and avoid predators.

If you want to be a good wildlife Samaritan, start by providing a back yard full of shallow watering holes: bird baths, clay dishes, flower pot plates, whatever you can provide with fresh, clean water will do. You may attract perching birds, hawks, quail, bobcats, foxes, bunnies, frogs, dragonflies, and more.

Be sure and change the water frequently to keep it free of mosquitoes, algae, and any pathogens. If your little pool is more than an inch or two in depth, place a piece of rubber or similar along the side for traction to help small or fossorial creatures escape from drowning.

Placing misters under shrubs or trees (that need watering) creates a cool, shaded microclimate where animals may feel safe enough to hang out and thermoregulate during both day and night time heat extremes. 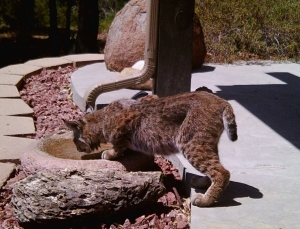 Providing both raised and ground level shallow baths will not only be a boon for wildlife, you can get some interesting photo ops while creating a little haven in your own back yard.

Meanwhile, the greater the biodiversity, the more help you will have in reducing unwanted species. For instance, don’t forget that possums eat lots of ticks, skunks love roaches, king snakes eat rattlers, fence lizard blood kills the Lyme bacteria, and owls eat hundreds of rodents a week. Biodiversity is your friend, so give it a helping hand - and resist the chemical pesticides and other poisons while you’re at it.

A final note on helping wildlife with water: there are some who have been told that doing so negatively alters the animals’ survival, and insist that we should instead “let nature take its course.” Having studied the human-wildlife interface in many places worldwide, I can say with certainty this is a misguided notion.

Not only can wildlife use our help, we owe them a major debt. In every activity we do, whether using fossil fuels, growing food, building roads and houses, or disposing of our waste, we are deeply and permanently harming wildlife and their habitats, both directly and indirectly. Giving them a leg up with a cool drink or a shady spot is the least we can do to repay our karmic hubris. Or as Emily Dickinson said so perfectly, “…if I can ease one life the aching, Or cool one pain, Or help one fainting robin, Unto his nest again, I shall not live in vain.”

Welcome to The Wild Zone by conservation biologist Renée Owens. An East County resident and President of The Wild Zone Conservation League, Renée has worked locally and abroad for groups like National Geographic and the Wildlife Conservation Society researching a myriad of species from the big and beautiful to endangered and deadly. She welcomes your inquiries on any wildlife topics at info@wildlifezone.net.

The Blue Birds were wonderful.... What a photo! Was it your's Renee? It a wonderful shot. We can't post photos on this site understandable... During the Alpine west fire we had two Hawks visit our bird baths... Our Veterinarian partner at San Diego State feel they may have landed on a burt branch during the fire and were getting relief as they both were talon first in the water. If anyone wishes to install a bird bath it's a rewarding and caring thing to do. A small solar bubbler available for about 12 dollars is available online Amazon or what ever you use , they help attract the birds to water. Cheers ( Natural Bird Sanctuary yard ) No Pesticides ...
Hi Kevin, thanks, yes those are my photos. We have bluebird boxes (and I studied eastern bluebirds in NY a long time ago), they are a favorite passerine. I'd love to see photos of your bird bath with visitors!

The bubblers sound like great ideas to include.  Mom's had hawks in her bird bath in the past, too.  Especially in the recently burned areas, though, such as Alpine and part of Ramona, wildlife really needs help right now.

Thank you so much. I'll pass this on to family and friends...