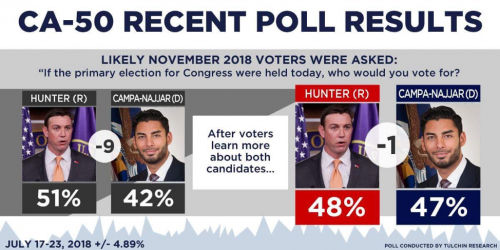 August 1, 2018 (San Diego’s East County) — Republican Congressman Duncan D. Hunter may be facing the toughest challenge of his career. His Democratic opponent, Ammar Campa-Najjar, has raised over a million dollars, more than the $848,000 raised by Hunter as of  June 30th.

Trippi will serve as media director and lead strategies. He has handled several successful Congressional campaigns including Democrat Doug Jones’ recent upset victory in deep red Alabama. Trippi is also known for his work on presidential campaigns for Democratic candidates including Howard Dean, where he helped develop Internet fundraising strategies for grassroots support, as well as California Jerry Brown’s successful race in 2010 when Brown was outspent four to one by Meg Whitman.

"There's a clear hunger right now in CA-50 for independent leadership," Trippi said. "Ammar can win this race. Just like we saw in Alabama with Doug Jones, voters want to end the divisiveness and chaos, and start working together to get things done. Incumbent Congressman Duncan Hunter represents scandal and partisanship. Ammar will bring integrity to Washington, and work with everyone for common sense solutions.”

This week, the campaign announced that a new poll conducted by Tulchin Research found Campa-Najjar within single digits of Hunter in an initial horse race, and statistically tied after voters read ballot statements.

The poll was conducted by phone, wires and online July 17-23. Those polled in the district were 44% Republicans, 29% Democrats, 21% no party preference and 6% other.  The poll found voters favored a generic Republican over a generic Democratic by just 5 points—47 to 42 percent.  After being shown ballot statements, Hunter’s lead shifted to just 1 percentage point – 48 to 47%.

The district is among the most conservative in California, with Hunter winning past races by strong double-digit margins. But even a growing number of Republicans have voiced discontent with some aspects of the Trump presidency and questions raised about Hunter's integrity including a criminal investigation.The poll found a majority of voters viewed Hunter negatively and 55% said they want their representative in Congress to provide checks and balances against the Trump administration.

Hunter is an Iraq and Afghanistan war veteran who fills the seat formerly held by his father, Duncan Hunter Sr.  He’s run on a conservative platform touting a strong military defense, border security and vocal support of President Donald Trump, whom Hunter called ”the greatest president of my generation” in a speech on the House floor July 26th in which Hunter called for impeachment of Deputy Attorney General Rod Rosenstein in relation to his investigation of Trump-Russia ties.

The Department is also leading the criminal probe of Hunter's alleged campaign finance violationsfor alleged misspending of campaign funds for personal use including vacations, high-end jewelry, oral surgery bills, first class airfare for his son’s pet rabbit and tuition at his children’s school. He has denied wrongdoing but repaid over $40,000 to his campaign..

Campa-Najjar is a former labor department official in the Obama administration who says he’s running to help working Americans. He says the recent poll shows voters are fed up with Congressman Hunter Jr. and are ready for “real representation,” adding, “Voters want an independent leader who will stand up with women instead of question their qualifications, work across the aisle on healthcare, immigration, and infrastructure instead of toe the party line, and challenge the administration when it imposes tax policies that hurt California families and tariffs that hurt farmers, local manufacturers and car dealers who rely on trade, not aid, to make an honest living.”

Many of Hunter’s contributions are from lobbyists and out of state interests, says Campa-Najjar, who concludes in an email to his supporters, “Hunter’s record shows he’s beholden to special interests, not our interests.”

According to campaign contribution records at Open Secrets, over 46% of Hunter's contributions have come from political action committees (PACS), while Campa-Najjar got less than 5% of his donations from PACs.

Well then, I suppose (and hope) I'm on the right track for who to vote for next election. No to Hunter and Issa I'm not sure about - yet.

after we posted this. That's not surprising since Campa-Najjar was a White House intern during the Obama administration.

Obama states, "I’m proud to endorse such a wide and impressive array of Democratic candidates – leaders as diverse, patriotic, and big-hearted as the America they’re running to represent. I’m confident that, together, they’ll strengthen this country we love by restoring opportunity that’s broadly shared, repairing our alliances and standing in the world, and upholding our fundamental commitment to justice, fairness, responsibility, and the rule of law.  But first, they need our votes – and I’m eager to make the case for why Democratic candidates deserve our votes this fall.”

I checked Hunter's endorsements and the most high profile I found was from  Congressman Darryl Issa. I don't think President Donald Trump has endorsed Hunter, at least an  Internet search didn't turn it up. If I'm wrong I hope the Hunter campaign will let us know; there is no contact us button on Hunter's campaign site, oddly.

Will have my vote.