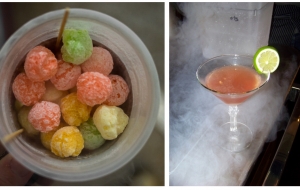 August 8, 2018 (San Diego) -  A trendy snack called Dragon’s Breath is sending some consumers including teenagers to the hospital with serious burns and internal injuries, the Washington Post and other media outlets report. The snack is made from colorful cereal balls similar to Fruit Loops or other snack items drenched with liquid nitrogen, which freezes to around minus 320 degrees Fahrenheit. The Dragon’s Breath user then blows out condensed moisture that looks like smoke.

The concoction reportedly originated in Asia around 2015 and made its way to the U.S. when a Los Angeles chef introduced it. Diners are advised to use a stick to eat Dragon’s Breath tidbits and never to touch it with their hands. But that advice is sometimes ignored and even when directions are followed, some have suffered serious harm.

A 14-year-old Florida girl who touched a Dragon’s Breath snack at a county fair nearly had to have her thumb amputated. The fair has said it will not allow Dragon’s Breath to be sold there next year.

Others have suffered burns to their mouth, esophagus and stomach from liquid nitrogen, which is also popping up in drinks. A British woman had to have her stomach removed after drinking a liquid nitrogen cocktail in a bar, Straits Times reports.

The substance can also cause deadly asphyxiation if inhaled, since it displaces oxygen, and it can damage vision if it comes into contact with the eyes.

Liquid nitrogen is the same substance used by doctors to burn off pre-cancerous skin lesions and by some exterminators who pump liquid nitrogen into walls to freeze and kill termites.

Vendors of liquid nitrogen snacks and drinks typically warn customers to not touch the items except with a stick, blow on it several times before consuming, chew Dragon’s Breath before swallowing and never drink the liquid left in the cup.

The safest option, however, is to avoid  Dragon’s Breath and other foods or beverages containing liquid nitrogen.