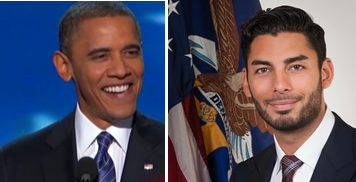 “I’m proud to endorse such a wide and impressive array of Democratic candidates – leaders as diverse, patriotic, and big-hearted as the America they’re running to represent,” Obama said. “I’m confident that, together, they’ll strengthen this country we love by restoring opportunity that’s broadly shared, repairing our alliances and standing in the world, and upholding our fundamental commitment to justice, fairness, responsibility, and the rule of law.  But first, they need our votes – and I’m eager to make the case for why Democratic candidates deserve our votes this fall.”

Campa-Najjar served in the Obama administration in the Labor Department and as a White House intern.  He stated, “It was an honor to serve President Barack Obama’s administration, and it’s an honor to have his endorsement today. As a skinny brown guy with a funny name, I grew up deeply inspired by the president."

The Democratic candidate added, “He not only gave me the road map to navigate my own journey of identity as a man, but he gave me the destination in self— a role in his administration. We live in divided times, and we have a lot of unfinished work ahead. But I’ve never been more hopeful for the future. With President Barack Obama guiding the next generation of leaders, the American people can rest assured that hope, unity and service will be on the ballot this November.”

Something the ECM would never admit.
That Ammar lives up to his campaign promises.