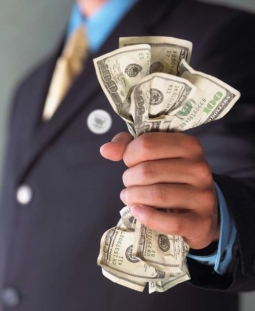 November 1, 2018 (Santee) - A flood of developer dollars are backing incumbents/status-quo candidates (McNelis, Hall & Koval) in this city council election. The dark money backing for these candidates show that this election is about resident versus developer control of city government and the ability to approve the massive Fanita Ranch project.

Santee code does not allow corporations or Political Action Committees (PAC)s to contribute directly to candidates. Code is intended to provide transparency to voters and to reduce unsavory corporate influence by those intending to profit off of land use decisions. Fines have been issued in Santee for violating campaign laws against money laundering in the past.

Documents filed reveal the Building Industry has now funneled about $50,000 to two PACs alone. Records document funds have already been used to purchase a hit piece mailing against Evlyn in District 1 and election signs and mailings for other status-quo-candidates.

The developers' candidates own 460 statements show heavy funding from employees of the Building Industry. Exectives of HomeFed Fanita Ranch and other homebuilders are prime examples. Since most of these filings come late, the Building Industry is betting that voters will not discover the truth until the election is over.

The flood of developer money tells a clear story - they are trying to buy the seats and retain control of city government.When the people's concerns fall upon deaf ears at city council meetings - these dollars are the reason why. Incumbents always choose their donors interests over the interests of residents when the two conflict. Santee voters have an opportunity to change that next Tuesday November 6, by electing the challengers to the status-quo, Evlyn, Zackand Rudy. These candidates do not accept developer dollars and are funded primarily by Santee residents.

Will voters seize this opportunity to SaveOurSantee by rejecting the developers candidates?

kkeelie, how do you know that the Deputy Sheriffs PAC conducted this effort with backing from developers?
Dark money is funds given to a non-profit organization that can receive unlimited donations from corporations. individuals and unions. The non-profit can spend the money to influence elections, but are not required by law to disclose their donor. By disclosing the donor doesn't make the funds not "dark money". It's still corporations unduly influencing the election. I think an inquiry into the Deputy Sheriffs Association PAC should definitely be made. Something is very "not kosher" about this. I know both Stephan and Van from working with them against the building of a power plant in Santee. They both are intelligent, honest people who really want what's best for the City of Santee. If they are concerned about this, you should be so too. The good old GOP boys ran Santee for a long while, not taking it in the best direction for the future. Their build at any cost ideas have made Santee a small city with big traffic problems. Builders are only concerned with making profits, not about the impact their projects have on cities. If you want to see Santee change for the better, change the people who make the decisions.
Though I have no horse in this race, I will take exception to the notion that somehow these campaign donations are dark money. They are not! Dark money is spending by PACs who do not disclose their donors. As one can see (on the 496 forms), these donations are being given to the Deputy Sheriffs Association PAC who are then using them in an independent expenditure campaign. As required by campaign finance law, all of the donors are clearly identified. I think the larger question is why is the Deputy Sheriffs PAC conducting this effort with big-money backing from developers?