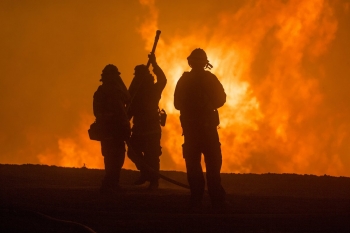 Update November 14, 2018:  Updated information from Cal Fire indicates there are now at least 48 people confirmed killed in the Camp Fire, with over 100 still missing.

November 11, 2018 (San Diego’s East County) – A red flag warning for San Diego County and much of Southern California has been extended through Tuesday as three major wildfires continue to scorch the state.  Terrified evacuees posted videos such as this one, shot by a woman escaping through tunnels of fire along a freeway north of Los Angeles: https://twitter.com/i/status/1061430443134734339.

The #CampFire in Northern California is now the most destructive firestorm in the state’s history, with 23 people confirmed dead and  over 100 still missing.  It’s now 109,000 acres and 25% contained. The Carr Fire destroyed virtually all of the town of Paradise in Butte County north of Sacramento and has also threatened Oroville, Chico, and other communities. It has destroyed 6,453 structures and 15,000 more remain threatened. Three firefighters have been injured. Full containment is not expected until November 30th. View incident report:  http://cdfdata.fire.ca.gov/admin8327985/cdf/images/incidentfile2277_4178.pdf 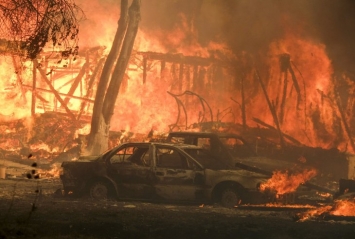 #Woolsey Fire  has destroyed 177 structures and threatens 57,000 more in Los Angeles and Ventura Counties, burning between Malibu and Simi Valley. The fire has killed two people.  It is 5% contained with full containment anticipated November 16th.  Portions of highways 1 and 101 have been closed.  It forced evacaution of some animals at the Los Angeles Zoo and dramatic efforts to save Pepperdine University,w here students sheltered in place. The fire decimiated rich and poor, wiping mobile homes and Malibu mansions, forcing stars such as Lady Gaga to evacuate and await word on the fate of their homes.   View incident report (note, this report was last updated last night by Cal Fire): http://cdfdata.fire.ca.gov/admin8327985/cdf/images/incidentfile2282_4176.pdf

The #HillFire burning in Ventura County south of Simi Valley and north of Malibu has burned two houses and scorched 4,531 acres. The  good news is that this fire is now 65% contained. View incident report: http://cdfdata.fire.ca.gov/admin8327985/cdf/images/incidentfile2281_4177.pdf

Several relief funds have been established to help the survivors of thee fires.  Read how you can help here:  https://www.10news.com/news/how-to-help-victims-of-california-s-camp-hill-and-woolsey-wildfires

Causes of the fires remain under investigation.

likely to climb higher in the Camp Fire, with 228 still missing and searchers hunting for more bodies.

KR is correct, it is just that the October 2017 fires were multiple incidents, the Tubbs, Nuns, Atlas and Redwood Valley fires. They add up to a greater number, true. Sadly, the Camp fire moved quickly over fleeing residents, and over 100 are missing. Hoping for no more records, please.