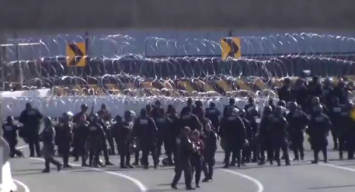 The Twitter hashtag #migrantcaravan includes many updates, photos and videos of the confrontation on the border and shutdown of the busiest border crossing in America.

The migrants have said they are fleeing violence and death threats in nations where drug cartels have taken many lives.  Most of the migrants have indicated they plan to ask for asylum at the border, a right protected by international law for anyone fleeing persecution, though countries can vet those seeking asylum and deny sanctuary to any whose claims prove unfounded.

A federal judge earlier this month ruled that President Trump acted illegally when he indicated asylum claims by caravan participants would not be processed.  The judge held that this violates international law protecting those who ask asylum, whether at a border checkpoint or anyplace in between. Yet the President has thus far defied the court and still refuses to allow the caravan migrants to submit their claims lawfully at border crossings, ordering U.S. forces to respond with force to prevent the migrants from crossing illegally after being denied their legal rights to request asylum.

Homeland Security has contended that some 500 of the 7,000 migrant caravan members have criminal records.  The agency has not disclosed the nature of the supposed crimes, which potentially could be only misdemeanors or a history of being previously deported for crossing the border as an undocumented immigrant.

Homeland Security contends that some migrants turned violent, hurling rocks at agents and in one case, lighting a tree on fire in a failed attempt to escape capture after trying to cross the border illegally. Mexico has said that it will deport about 500 migrants who tried to cross illegally and acted violently.

Trump has asked Mexico to allow migrants to stay there but thus far, the Mexican government has not agreed. Many of the migrants say they fled their homelands in Central America due to gang violence and death threats against themselves or their children.

Meanwhile the plight of some has become equally desperate in Mexico. Joseph Garcia told Reuters, “They want us to wait in Mexico but I for one am desperate. My little girl is sick and I don’t even have money for milk. I want to work but they haven’t given me papers.”

One desperate woman who attempted to climb the fence on Saturday with her two small children fell and was impaled on rebar, but is expected to survive. Military troops sent to the border by President Trump have spent the past few days reinforcing the border fence with razor wire similar to that atop the Berlin Wall, which formerly separated East and West Berlin in Germany.

The migrants here have been met with mixed reactions in Mexico, welcomed by some who have offered help, but also sparking protests from others. Similarly on the U.S. side of the border, protesters on both sides of the issue have been vocal.

Some have pointed up the tragic irony of the U.S. government using force against would-be immigrants on Thanksgiving weekend, a holiday that celebrates Native Americans welcoming and sharing a feast with European immigrants.

San Diego Mayor Kevin Faulconer, a Republican, met today with Homeland Security Secretary Kirstjen Nielsen to discuss the crisis. His Twitter post reads, "For several weeks my office has been in close communication with @CBP officials in preparation of the arrival of the migrant caravan. Today @SecNielsen provided me an update on the situation. My focus remains on the safety of our communities and maintaining cross-border commerce."

Congressman Juan Vargas (D-San Diego) has issued a statement criticizing Trump. “Today’s unprecedented demonstration at the San Ysidro Port of Entry is a direct result of President Trump’s failed leadership. His complete disregard for human rights, international law, and immigration law threatens the safety of federal officers and the millions of people that pass through the border region," Vargas says. "The President continues to address a complex global issue with an offensive simplicity that makes the United States appear callous and xenophobic to our neighbors and allies."

Congresswoman Susan Davis issued this statement:  “The closure of the San Ysidro Point of Entry and the clashes at the border stem from the refusal of the Trump Administration to follow the law. Trump continues to be rebuked by federal judges for violating our nation’s laws. First, it was separating families and now it’s the failure to allow migrants to legally apply for asylum in a timely fashion. By ignoring the law and long-standing policies for processing asylum claims, this president is putting not only migrant families at risk but border patrol and servicemembers, as well. The vast majority of migrants are seeking a better life – not confrontations with law enforcement. It’s time for this president to start following the law and abandon attempts to militarize a response to immigration. Congress also needs to address long-neglected comprehensive immigration.”

Yet another anti-Trump piece by ECM, weird....who could've seen that coming. Hey, did you hear that the head of the California DNC, Eric Bauman, is under investigation for sexual assault??? Not "news worthy" enough to make the cut here huh?
For the person that wrote this, Please explain that to immigrants that came legally ? and Paid around 10 thousand plus dollars to do so. And are now proud citizens of the USA making an honorable living. Some in the 3 digit land. If we go and try to overrun the country the LEFT go we are killers. We cannot help every person in poverty it would exceed the USA population count. I ask can you the person that wrote the Subject title take 10 or more of these ordinary people into your house to help get established? I think not....

The asylum process is specifically designed for those whose lives are in immediate danger, so therefore they cannot wait through a lengthy immigration process .

You can't  get asylum just because you are poor, Kevin.  You have to be able to show that you were persecuted and your life was in danger to to specific reasons spelled out in the asylum laws such as religious, ethnic or political persecution.  Asylum is not availble merely because someone wants a job.  It's only for those who would likely be killed, or have a family member killed, if they were sent home.

I do not have spare bedrooms in my house but would do my part to help asylum seekers with donations of clothes, shoes, etc. as many people in San Diego are now doing.  Before this caravan, ICE under Trump was taking some asylum seekers and litrally dumping them in the streets of San Diego with no resources.  A friend of mine has been going each week to a busstop where they are dumped with a group of people bring food, toys for the children, clothing and blankets to help them.  It's called kindness and many Americans are very big-hearted.

The long-term answer is to help provide resources to combat the drug cartels in central America that have overrun countries there, thratening and terorizing the populace.

People do it everyday supporting those in need with in reason. You take 10 of these guy's into your home and help them. yep just what I thought another can't do it person. Have a nice day
This isn't the first time stuff like his has happened and no one gave a dang back then... There are multiple video sources that show a large group of people moving towards the fence while throwing "projectiles" (apparently rocks) at the border patrol agents. Shortly after you start to see plums of smoke from the gas being deployed. People have been SHOT for throwing rocks at border patrol agents, the agents responded with gas and rubber bullets to stop the assault on them and on the fence as they should have. The kids are being used as pawns in hopes that it will change the result. The parents are 100% at fault for putting those kids in danger like that. So tired of the news outlets making this some humanitarian BS story. The story should be how these "parents" are bring kids to the front lines of a attempted illegal crossing and physical assault of our officers. If the people want asylum the US has policies for that and are allowing people to apply. Rushing the fence, trying to cut holes, sneaking over, and throwing rocks is NOT the way to do it.

A few hot heads who threw rocks or pushed chldren to the front, if that occurred, should be denied asylum.

But there are thousands more who are simply ordinary people trying to save their children from violence in central America.

Trying to sneak over is of course an act of desperation when legal avenues are shut, as this president has done for asylum seekers.  Some have said their children need medicine or that they are out of money to buy milk. The weather is cold and many lack proper clothing or shoes  having worn through the soles walking a thousand miles or more.

Some Mexican blogs are reporting a rumor that word was spread among migrants that they were going to be allowed  to apply for asylum if they crossed over.  If that is true, it would explain the rush, and one wonders if a plant inside the group (Homeland security says they embedded spies) could have started such a rumor on pourpose to foment the conflict.  I have not seen this reported in major media yet and do not know if it's true, but it's a cautionary note that things may not be as some would have us believe.