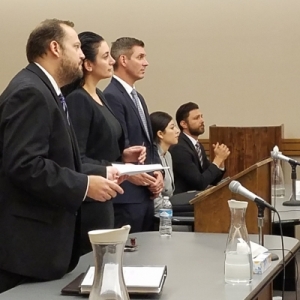 Jessica was CEO of Ben’s Chamber of Commerce. The web page for the chamber seems to have been deleted. Benkalasho.com used to have a navigation to a “spouse” page about Jessica. The page is still there, but navigation links to it have been deleted. (https://www.benkalasho.com/spouse)
Is there anything new to report on this?
… it is full of truths.
Attorney Jimmie Parker is a relentless litigator. The Kalasho's have no chance of prevailing against him, and Parker will not take his foot of the gas, ever. His disdain for the Kalasho's is quite evident in court filings, and Parker will likely bankrupt them.
This couple is the most the most egocentric couple I have ever encountered. I do not feel sorry for them or pity them, as they have created their own reality and their own problems. I can't imagine any lawyer in San Diego County, or else where, agreeing to represent Bessman Kalasho, as he is obviously guilty and/liable for all he is being accused of. You have been framed? Yeah, right. Sure, Bessmon. Keep deluding yourself.
I guess she doesn’t want to go to jail for Ben. The only reason for her to get her own lawyer is to squeal about how/where he hid the money to save her own skin and throw Ben under the bus. Two awful, vain people out only for themselves; screw everyone else.
Bingo!
You do realize in a sworn deposition Bessmon's wife admitted to visiting a friend in Cerritos, 100 miles from El Cajon, when the fake nude beauty queen photos were posted online from the friend’s home? I don't know if she did or not, but that sounds like complicity not victimhood. Bessmon's arrogance and lawlessness have caught up with him, he will soon realize life is not a game, it's for real.
No snarky remarks from Ben Kalasho as usual, surprising to say the least. He can't even talk on social media - his accounts appear to be gone.
Time for Ben to head to the Bunker. Your future is waiting.
I mean, what the hell was Ben Kalasho thinking?