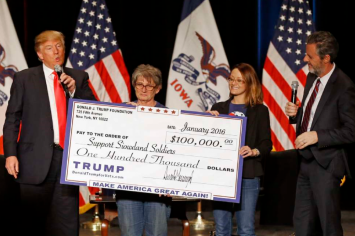 Her office’s investigation into Trump and his three oldest children, all officers on the Foundation, will continue.  According to the NY Attorney General, “none of the foundation’s expenditures or activities were approved by its Board of Directors” which had not met since 1991.  “Mr Trump alone made all decisions related to the foundation.”

Trump has agreed to have the charities’ remaining $1.75 million in assets dispersed under court supervision to legitimate charities.  Underwood is also asking the court to order Trump to pay over $2.8 million in restitution and to ban the President and his children from serving on boards of any other charities in New York.

Trump used his charity’s money as “his own piggy bank,” the Washington Post reports, including illegal expenditures for his campaign including giveaway items at his rallies during the presidential primaries.  He also reportedly wrote foundation checks to buy portraits of himself to hang at his golf resorts, to purchase a fountain for Trump Tower, to take a trip to Paris,  and numerous additional acts of “self dealing,” which is also illegal.

He failed to register the charity in New York for purposes of accepting outside donations, another violation.

Some donations raise red flags with investigators because they appear to be efforts to buy influence illegally, including $25,000 paid by the foundation to a Florida attorney general while the official was reviewing fraud allegations against Trump University.

Investigators are also probing whether the foundation took money given for illegal purposes.  Special Prosecutor Robert Mueller is looking into a  $150,000 donation made to the Trump Foundation in 2015 by Ukranian billionaire Victor Pinchk, which Trump’s former attorney Michael Cohen said he solicited in return for Trump’s appearance at a video conference in Kiev after Trump began his presidential campaign. Federal election law prohibits foreigners from contributing to U.S. political campaigns.

The New York state suit was filed following an investigation into the Trump charity by  Washington Post reporter David Fahrenthold,  who won a Pulitzer Prize for his reporting on Trump’s so-called charity.

The newspaper’s investigation initially turned up evidence that the Trump Foundation raised large sums for veterans but as of the date of the Post’s investigation months later, the foundation had not paid any money to veteran’s charitable organizations.  The newspaper’s investigation unearthed many other dubious claims made by Trump, including finding that the foundation failed to honor a pledge of $10,000 to the Twin Towers Fund to help victims of the 911 terrorist attacks in New York. Trump Foundation also reportedly made illegal payments to settle legal disputes involving Trump’s Mar-a-Lago country club and other Trump businesses.

The foundation was originally formed in 1987 to disburse funds raised from sale of Trump’s “Art of the Deal” book.  But Trump stopped giving any of his own money to the foundation son after and it has since disbursed only funds solicited from outside donors.

Marc Owens, former head of the IRS Office of Exempt Organizations division told the Washington Post that the long list of troubles with the Trump Foundation is “bizarre” adding, “It’s the first time I’ve ever seen this” in 25 years at the IRS and 40 years of tax-related work.

Citizens for Responsibility and Ethics in Washington (CREW) has filed a complaint with the Internal Revenue Service (IRS) over apparent violations of  tax laws governing charitable organizations.

Nice job of "unbiased" reporting, Miriam. You've proven once again that you are most definitely not a true reporter by any sense of the word, but just another political activist. You consistently use this site as a means to promote your political views and stifle those of your opponents. You lack self-awareness and clarity. Merry Christmas
Which part of her reporting isn’t true? Thank goodness there are still those speaking truth to power.
How many times did Donald Trump refer to Hillary Clinton as "crooked Hillary"? Also has accused people of "lying". Again, the usual pattern of lame attempts to deflect scrutiny from his own illicit behavior. What a sad person.

Which actually does give huge sums away to good causes around the world, when his own "charity" was little more than a front to funnel money into his own pockets or buy influence for Trump's campaign.Sad.