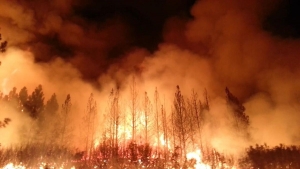 “To threaten federal disaster funding is a grave insult to our fire-scarred region and a slap in the face of our brave firefighters. The President and the Governor need to work together and put the public’s safety over politics. I know the county will do its part by continuing to make major investments to improve firefighting and fire prevention.” – Supervisor Dianne Jacob

The president tweeted: “Billions of dollars are sent to the State of California for Forrest fires that, with proper Forrest Management, would never happen. Unless they get their act together, which is unlikely, I have ordered FEMA to send no more money. It is a disgraceful situation in lives & money!” He later re-sent his message after correcting the spelling of “forest.”

The Los Angeles Times reports that it contacted the White House for clarification on exactly why he is blaming California forest management practices, but received no response. In fact, the President’s statement is out of touch with reality for several reasons.

One, Cal Fire already conducts controlled burns regularly on state-controlled lands and last year received a substantial increase in funds for forest clearing, acontroversial practice that some environmentalists object to, but that is exactly what Trump has in the past touted.

Two, the vast majority of California’s forests are on federal lands, not state.  Most of the remaining forests are under private control.

None of the recent devastating fires have been found to be caused by problems on state lands with any forestry practices.  The most devastating wildfires recently were predominantly caused by utility lines and equipment, coupled with strong winds.

Also Governor Gavin Newsom, in his first speech just hours before Trump’s tweet, pledged that his proposed budget will include increased funding for both firefighting and forestry management. He was not responsible for decisions made during Jerry Brown’s long tenure, when the fires in question occurred, and immediately did take actions along the lines of what Trump had previously pushed for. So It’s unclear what if anything the President had in mind that he wants to see improved, or whether as some critics contends, his diatribe may be a means of extracting revenge on California, where political leaders have regularly stood up against numerous Trump policies and voters overwhelmingly voted Democratic. But ironically, the areas hardest hit by the 2018 wildfires live mostly in areas of the state that voted Republican –Trump’s dwindling base in our state.

FEMA relief funds for disaster victims and funds to combat emergencies have traditionally not been tied to state actions elsewhere. Trump has singled out California whileignoring other states that have policies that contributed to disasters.

Houston’s unwise urban planning, for example, has been widely criticized for allowing new construction in an area that has regularly flooded. Yet the President has not threatened to cut off FEMA funds for Texas, nor Florida, a state where leaders deny climate change, promote fossil fuel consumption fueling larger and more frequent hurricanes that have ravaged Florida’s coastal areas where rebuilding is encouraged.  Both Florida and Texas have been strong Republican/trump bastions.

While a reasonable discussion can be had over whether itmight make sense in areas hit by recurrent disasters to encourage relocation rather than rebuilding on the same site, or offer incentives to states that enact policies to help lessen the severity of natural disasters through better land use policies, what’s not reasonable is to punish victims who lost homes with no prior warning, because of political whims.

San Diego Supervisor Dianne Jacob, a Republican, issued a statement condemning the President’s actions.  “To threaten federal disaster funding is a grave insult to our fire-scarred region and a slap in the face of our brave firefighters,” she said. “The President and the Governor need to work together and put the public’s safety over politics. I know the county will do its part by continuing to make major investments to improve firefighting and fire prevention.”

Governor Gavin Newsom, a Democrat, tweeted, “Disasters and recovery are no time for politics. I’m already taking action to modernize and manage our forests and emergency responses. The people of CA -- folks in Paradise -- should not be victims to partisan bickering.”

Newsom has pledged $305 million for increased forest clearing as well as firefighting and beefing up emergency 911 responses. He has called on the President to double funds for maintenance of federal forests in California, though the President has ignored that request thus far.

In a visit to Paradise, a northern California town destroyed by fire in late 2018, Trump promised to help fire survivors. But thus far, many who lost homes have not even received trailers in which to take temporary shelter. Similarly, many Puerto Rico hurricane victims are still homeless. Theseresponses have been woefully lagging compared to responses to major firestorms in San Diego County following the 2003 Cedar Fire and 2007 firestorms. While nothing can ever fully make up for the loss of  a home filled with treasured memories, prompt FEMA funding following a federally-declared disaster can assure that families have resources for temporary shelter and beginning the arduous process of rebuilding.

Supervisor Jacob calls it a "grave insult", and; editorial states "proper Forrest Management"........I differ with both comments. First as a retired firefighter that worked in concert with what was called Calif. Dept. of Forestry aka Cal Fires; I heard first hand from their firefighters on scene, that their system worked fires to extend them a minimum 3 days before full containment. So what does that mean? Specifically a ploy to lay the groundwork for the next budget process. As to the second difference, "proper Forest Management" is a matter of opinion; which I have always believed, was to put the fire out, not trifle with it. My father died from pneumonia from smoke/Cedar fire. prolonging a fire is polluting our environment and subjecting us to a health hazard. I believe the "full insult" was California's leadership/law makers taking our Golden state into 3rd world status stepping outside of federal law and our Constitution. Sanctuary Cities, State, welcoming illegals etc. just does not sit well with me. I believe California should not receive any Federal funding while it is considering different statehood status and messing with our Sovereignty and Federal laws. I am a senior native.