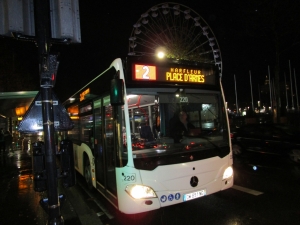 January 18, 2019 (San Diego) - Having just returned from my second home in France, a city of 180,000 residents with a state of the art tram and ultra-modern fast buses, I am again reminded of San Diego’s real dilemma in promoting public transportation. Home to Edouard Philippe, former Mayor and now French Prime Minister, the City of Le Havre has been transformed through a network of mass transit that is the envy of the world. What is their secret?

The import of public transit lies not so much in its utility but rather in its cultural acceptance. The reason buses fail to attract ridership in our City is imbedded in a deep social stigma attached to sitting at a bus stop and giving up the luxury and pretention of driving one’s personal vehicle. This is not the case in France beginning with Benjamin Franklin's meeting with the great French General Marquis de Lafayette to the current government led by French President Emmanuel Macron French citizens including the Judge I had breakfast with last week fully embrace mass transit. 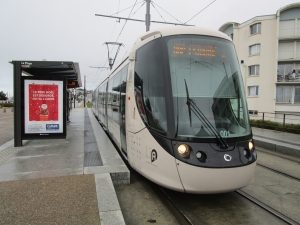 San Diego leaders in SANDAG and the Metropolitan Transit Service are avoiding this simple truth by masking a cultural cancer with bandages. As a member of the Claremont Community Planning Group in 1991-93, I cast one of the first votes in support of the Mid Coast Trolley. Knowing that unlike buses, there is something mystical and trendy about riding the rails. I knew instinctively that if we built it, they would come unlike adding more archaic buses.

The population of our City was 420,000 residents in 1967 when I arrived as a teenager with my parents. Today it is over 1,300,000. That is almost an increase of 1,000,000 people. The bottlenecks in Pacific and Ocean Beach will ultimately paralyze our City unless individual citizens change the cultural construct and ditch their cars. I don’t see this happening as San Diegans are too proud to take a bus. In addition, we don’t have tram service at San Diego International Airport, relying instead on buses skirting the airport perimeter. This is absurd. We are also not planning for a tram into Pacific Beach from the Balboa Avenue trolley station. This too is absurd. None withstanding our over indulgence with the automobile lurks another catastrophe being these so called scooters and dock less bikes littering our neighborhoods like trash, endangering our children, elderly and physically challenged while serving no useful purpose excepting perhaps a joyride by a drunken thirty year old in Pacific Beach.

As someone who has not had a personal vehicle for most of my life and has relied on foot and pedal power, I will attest in no uncertain terms that San Diego has a deep fundamental problem in accepting public transportation. I have bore witness to literally tens of thousands of cars with one occupant during rush hour on Balboa Avenue and not one single pedestrian. This has become a moral issue. Coincidentally, why did the Metropolitan Transit Service recently cut bus service in Clairemont?  I urge the citizens of this City to find a way and stop making empty excuses in not relying on public transit.

You have mistaken pride for Americas love of freedom.