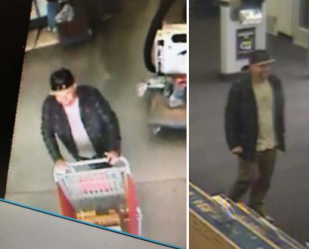 February 8, 2019 (Santee) - San Diego County Crime Stoppers along with investigators from the Santee Sheriff's Station are asking for the public’s help in identifying and locating an unknown suspect who stole a purse from an unlocked vehicle and used stolen credits cards to make purchases at various stores in Santee.

The suspect is described as a 35 to 45-year-old White male with a medium build, standing about 5’8” tall and weighing approximately 180 pounds. He was last seen wearing a black hat, dirty white t-shirt, tan pants and a dark blue plaid jacket.

I'm going old school and it was a Ladies purse, female. The stores now adays never ask for id anymore. This use to be common practice......the stores in the end take the loss, rightfully so for not checking the card and name.....a Ladies name on the card and a male using it. Alarm's????

was one that could be either male or female such as Francis, Robin, etc.

Hopefully this criminal gets caught soon, and prosecuted to the fullest extent of the law!