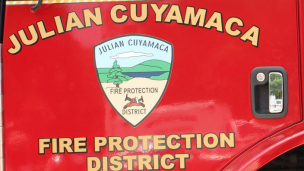 February 26, 2019 (Julian) — Voters in the Julian-Cuyamaca Fire Protection District (JCFPD) have until March 19 to mail in their ballots on Measure A. The ballot language is confusing to some.

In plain English, a “yes” vote would dissolve the county’s last all-volunteer firefighting district and put the San Diego County Fire Authority run by Cal Fire in sole charge of fire and emergency medical protection.  A “no” vote would save the district from dissolving and keep the volunteer firefighters and paramedics who have protected the area for over 20 years, with Cal Fire providing backup/mutual aid.

Last September, the San Diego Local Agency Formation Commission (LAFCO)  ordered the JCFPD to dissolve, as the County has done with all of its other former volunteer fire departments.

But residents of the district mounted a successful protest, getting enough signatures to put the district’s future on the ballot for voters to decide.

In short, if a voter chooses to darken the oval next to word “YES,” they are agreeing that the Julian-Cuyamaca Fire Protection District should be abolished, and the CAL FIRE/San Diego County Fire Authority should take over fire protection and medical services.

If a voter chooses to darken the oval next to word “NO,” they are disagreeing to LAFCO’s decision to abolish the JCFPD and want to keep things “as is.”

“The ballot question is generally provided by the political jurisdiction who is having the election. They must also follow the California Elections Code when doing so,” says Michael Vu, San Diego County Voter Registrar.

The County contends that residents would be safer under Cal Fire/CFA control, with professionally trained firefighters and stable funding provided by the County. The County used to provide funding to the JCFPD, but will no longer do so, meaning the district would have to raise its own money if voters opt to stay independent.

JCFPD supporters say that having volunteers who live in the district assure that emergency responses can be provided 24/7 regardless of snowy weather or dispatching of Cal Fire personal to battle wildfires elsewhere, by personnel who are familiar with local roads and terrain. Some 25 new recruits recently completed a JCFPD raining academy and Chief Mike Van Bibber has indicated he believes the district can raise the funds needed.

What else should you know?

Voter signatures verification is expected to begin on Feb. 25. Opening and preparing mail ballots for computer tabulation will begin on or after Mar. 5.

Vu says that additional election postings may occur as deemed appropriate. All results are unofficial until completion of the official canvass of the election on or before April 19. Citizens can observe any of the processes by contacting the Registrar at (858) 565-5800.

The registrar’s website at sdvote.com has been set up with a special section where voters can see if their ballot has been received.

As a retired firefighter both in the City & County, I am not a fan of Cal Fire. They historically are like a kid playing with matches when it comes to doing their suppression deed. I hope the volunteers hang tough.
The County did give use a small amount of money for a while, which was money we pay in taxes to the County and they are soo generous to give us a small portion back some of our monies paid in through taxes. We are fine on financials we can keep going without trouble now that we have a Fire Board who supports our Fire Dept. staying independent. They understand that this Dept. has been in service for 35 years, through the community support and an awesome group of people who train and are certified to the same level as all other firefighters in the State. They are professionals in every manner except they do it for the community for free and are not hired union people who get paid up to $250,000 a year for a Battalion Chief, Engineers can also be paid in that range, these people do it for the money and that is why they are fighting so hard in our small community. They want more high paying union jobs that we can not afford. Look to Riverside who are about 5 years ahead of us in this process and they are having Fire Services increase for $20 Million to $40 million to cover the services. It is an unsustainable model they are pushing and trying to sell to the San Diego Back County. This effects all of San Diego CO not just Julian Cuyamaca, they will be hit with higher fees as will we be. This does not also address the fact the Diane Jacob is terming out of her position on the Board of Supervisors as are others and what if the new board changes priorities from fire to something other? We could be left holding the bag as before or holding a bag begging for cash to paid for an overpriced Fire Dept. VOTE NO on Measure A

That's how the county years ago decided to get out of the fire protection business and thus the volunteer fire depts. were born. It has always seemed to me that if the county wants communities to close volunteer departments, the county should first write into its charter guaranteed fire protection with staffings at certain mandated levels.

You may be surprised to learn that even sheriff protection is not in the charter, either. Maybe someday citizens will do an initiative to put these things in there along with guaranteed ambulance service at the levels needed to give all county residents equal protection which is not the case now in many rural areas.

WE the people are much better off with a 34 running Volunteer Fire Dept. that is in great shape and working harder than even to make our Fire Dept. the Pride of the Backcounty. We are fully staffed 24/7/365. We just gained 22 new firefighters from our Academy graduating this weekend, besides the 36 other volunteers to help with staffing. We are moving ahead with also implementing services that for the last years where not accepted by the old board and old chief. We have started staffing a second ambulance on busy days as a buffer for our community and we are working on some very exciting medical developments that will really enhance our services and provide more robust services to JUlian and Cuyamaca. Please Vote NO on Measure A, More firefighters equals Better Protection! Our JCFPD will not leave you to fight other fires!