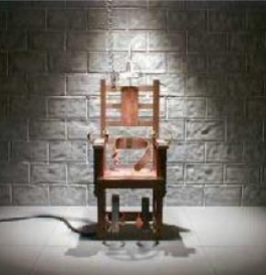 March 20, 2019 (San Diego) -- On Wednesday, March 13th, Governor Gavin Newsom imposed a moratorium on the death penalty. The reactions, both supporting the governor and condemning his action, have come swift and furious. When I read stories of families whose members, especially children have been murdered, even more so by serial killers, families who have attended death penalty appeal after appeal, cases where the evidence of guilt is overwhelming, I find little sympathy for the defendant and if I were a lawyer would find it near impossible to represent them. However, as I will try to explain below, my personal reactions aside, I am against the death penalty, partly because of the risk of executing an innocent person; but even the execution of someone overwhelmingly guilty of some truly horrendous act. This is not about them; but about us as a society. For a good summary of the history of the death penalty and current status around the world, see Wikipedia. Capital Punishment.

I have been against the death penalty since my pre-teen years when a 1957 TV documentary series, “The Court of Last Resort”, alerted me to the risk of an innocent man being executed. I bought the paperback book, which I still own, for a whopping 35 cents (Wikipedia. The Court of Last Resort; TV episodes available at YouTube; Gardner, 1952). Since then I have followed the various innocence projects, shocked at how easy a conviction is, based sometimes on flimsy, circumstantial evidence, or even fabricated evidence, and how difficult it is to overturn. Our system has a built-in bias where appeals courts often bend over backwards to not undo lower court decisions. Appeals are based on procedural justice, not substantive justice. That is, they are not supposed to look at the actual evidence presented at trial, nor new evidence, just if a person received a “fair” trial, a vague term at best. Thus, over the past few decades, over 150 innocent people convicted of murder, after spending years in prison and many on death row, were freed. And by some estimates circa 4% of those executed over the past decades were innocent (Death Penalty Information Center; Sarandon. Death Row Stories; Netflix. The Confession Tapes; Wikipedia. Innocence Project; Wikipedia. Kevin Cooper). With over 150 exonerated cases in the U.S., 60% still support the death penalty. What does that say about us?

I was raised to believe that in American justice, it is better for 10 guilty men to go free than convict one innocent man; but this doesn’t seem to reflect the reality where race prejudice, and a criminal justice system that elects Judges, DAs, Sheriffs, and Police Chiefs, often based on their conviction rates, innocence be damned (Kagan, 2003). In fact, there are examples where judges or DAs have changed their minds about a defendant or convicted person’s guilt, either in mid-trial or afterwards, who have later been voted out of office.

As the years have gone by my stand against the death penalty has been reinforced for a number of reasons:

All members of the European Union have abolished the death penalty, as well as Canada, Australia, New Zealand, and most Latin American countries. But, at least, the U.S. is in good company with nations that certainly reflect the best in American values???

In the U.S. DNA tests found at crime scenes often languish for years before they are tested, if ever. Not only does this deny justice to the victim of the specific crime; but potentially risks additional crime victims. There are a number of reasons for this backlog; but funding both for training and labs is a major reason. The funds going to the costly death penalty and its automatic appeals could have been used to expedite DNA testing.

There are a few cases where the death penalty was used as a bargaining chip. For instance, the case of John Albert Gardner, a serial rapist and murder, who, in exchange for life-imprisonment without the possibility of parole, confessed to several rape/murders and one attempted, and led authorities to the body of Amber Dubois, allowing her family to bury their beloved daughter and sparing the families the anguish of a trial and the subsequent automatic death penalty appeals (a confession eliminates any automatic appeals). However, Gardner had just been released from prison for horrendous sexual offenses based on incredibly lenient sentencing and had numerous parole violations that should have led to his reincarceration. Our criminal justice system had failed to protect us (The Associated Press, 2010; Lohr, 2010, McDonald, 2010; Perry, 2010; Wikipedia. John Albert Gardner).

And for religious persons, I remind them that Jesus clearly rejected the idea of an eye for an eye, the Bible clearly states: “vengeance is mine sayeth the Lord,” and even in the Old Testament and Jewish Talmud, murderers could flee to certain sanctuary cities and if one person was executed in the 20 year term of the High Court, the Sanhedrin, it was called “a bloody court.” (Recinella, 2004). For those who believe in eternity, shortening someone’s life by even 30 - 40 years is but one blink of an eye in eternity.

The goal of our criminal justice system should be to set an example of a just humanistic society, not cater to the baser or misguided instincts of some members. Saying killing is wrong, then killing to prove it, is hypocritical at best; but certainly does not make a clear statement that killing is wrong, just reinforces primitive emotions going back to the beginning of time. Shouldn’t we strive to do better? Isn’t one of the goals of a modern enlightened society to try to raise people to a sense of justice, one that clearly removes dangerous predators from our streets, keeps them removed; but does this, not for vengeance; but for community?

As for the will of the voter, democracy also risks tyranny of the majority. Not too long ago many states had Jim Crow laws, based on the will of the majority. And in earlier times, people were executed for poaching, rustling, and numerous other crimes. Texas, at one time, even had the death penalty for marijuana, though it was never used. Sometimes leaders need to lead, not just follow. Gavin Nelson is doing just that.

Yes, if it were my child or loved one, I would be angry and more than likely want to personally kill the perpetrator; but society should not be built on our personal emotional reactions; but try to create a society that reflects something better than the same primitive reactions people have had for millenium, an enlightened society that truly says that taking of human life is wrong, except when absolutely unavoidable as in a very clear case of self-defense, not killing while condemning it. The goal of a modern enlightened society, as Abraham Lincoln said many years ago is to strive for “the better angels of our nature.” A society that reflects the best teachings of Jesus and many other religions. And, of course, a society that uses available funds, for example, for DNA labs, catching criminals early on and, perhaps, preventing future crimes. Eliminating the costly and time consuming automatic appeals of death sentences because once carried out, it is irrevocable. And I strongly disagree with Prop 66, not only because it supports the death penalty; but because it shortens the appeals process, almost guaranteeing the execution of innocent persons.

“The Confession Tapes” currently showing on Netflix. [A large body of research has documented major problems with false confessions; yet, often major evidence against a defendant is only their confession]

Sarandon, Susan. “Death Row Stories” - 3 season TV series [some cases guilty, some cases where innocent people executed, and others where innocent people spent decades in prison, showing just how difficult it is to overturn a jury verdict, despite compelling evidence] [was on Netflix, hopefully will return. In meantime, several other online sites offer them, some for $1.99 per episode. CNN webpage does offer snippets and description of evidence]

Wikipedia. The Court of Last Resort

Joel A. Harrison, PhD, MPH, a native San Diegan, is a retired epidemiologist who has been writing articles over the past years supporting vaccinations for Every Child By Two, an excellent non-profit founded in 1991. Every Child By Two has changed to Vaccinate Your Family, expanding its mission to include vaccines for people of all ages. You can find Executive Summaries of his previous ECBT articles that hyperlink to the complete articles as well as his brief biography on the archived ECBT Expert Commentaries page. Dr. Harrison has studied and worked in several countries, including Sweden (where he earned his doctorate) and Canada (where he earned a Master’s degree). Having experienced both the Swedish socialized health care system and the Canadian non-profit single-payer system, over the past 30 years he has devoted considerable time to studying health economics and health care systems, concluding that, though the Swedish system is excellent, given American culture, he believes that a non-profit single payer system would be best option for the United States (see his article “The Case for a Non-Profit Single-Payer Healthcare System.” Dr. Harrison is a long-time member of Physicians for a National Health Program.

I agree with Joel A. Harrison PHD, MPH. Well written and clearly understandable, with solid viewpoints. The web links are great as well.
There never has been any easy answers to discouraging crime, and it has always been controversial. The very last paragraph was totally political advertising his Swedish/Canadian "non-profit single payer health care system" ideology. That did it! I believe in our system of free enterprise and earn/work for what you get. Health care has been a commodity just like car insurance, where you shop for it and pay for it. America is a free Republic that thrives on the free enterprise system and I love it and my country.

First, how does my short autobiography have to do with what I wrote about the death penalty? What you call political advertising, I call describing briefly who I am.

Second, there are numerous studies that have found that the death penalty DOES NOT deter murder?

Third, there are even some studies that have found an increase in crimes of violence following an execution. In other words, when society violently takes a life, it encourages others.

Fourth, as for your believing in our "free enterprise system." Please explain how when 65% of health care is funded through taxes, that's right, 65%, we have a free enterprise system? If you actually took the time to read my article, The Case for a Non-Profit SIngle-Payer Heatlhcare System, linked to in my short autobiography, you might learn why health care doesn't fit into a free market model, why even people who have the best private insurance find out too late that either their insurance doesn't cover certain things or suffer delays getting approved care, that the U.S. ranks poorly internationally on infant mortality, life-expectancy, quality adjusted life-years for chronic conditions, and our system actually hurts our international competitiveness, among other things. We are the only health care system in the world that is primarily designed to make money, not provide care.

Being a patriot, loving ones country, doesn't mean turning a blind eye to its faults. No nation on Earth is perfect. Blind patriotism can end in unnecessary suffering. If you truly understood the immense problems in our health care system, you would understand that we are all at risk, including you and your loved ones.