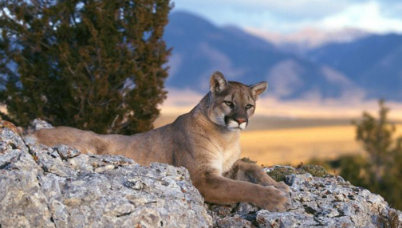 With inbreeding the Santa Monica population of big cats could go extinct in as few as 15 years. The Santa Ana population may have only 11 years. The study predicted “rapid loss of diversity in both populations,” which would likely lead to extinction unless the mountain lions regularly connect with other populations to increase their genetic diversity.

“This alarming study shows we need state-led efforts to improve habitat connectivity and save mountain lions from being pushed onto roads or into conflict with humans,” said J.P. Rose, an attorney at the Center for Biological Diversity. “Roads limit movement and harm habitats crucial to some of California’s most imperiled creatures. State officials need to create more wildlife crossings so animals have room to thrive.”

Scientists have already identified suitable locations for wildlife crossings that would help both populations of mountain lions, yet state funding has been lacking.

Ventura County recently adopted a first-of-its-kind ordinance that protects existing wildlife corridors and intact habitats from becoming overly fragmented by development. But more needs to be done at existing barriers that block animals from finding food, mates and shelter.

Millions of animals are killed every year on California’s roads and highways, according to UC Davis experts. Some of the state's most imperiled animals, from San Joaquin kit foxes to California tiger salamanders, are being reduced to roadkill.

A first step would be to identify hotspots where animals are hit by cars. The state could then build or enhance wildlife crossings. But Caltrans does not even track roadkill.

“While California delays, other states are installing crossings at hotspots and seeing up to 95 percent reductions in wildlife collisions,” Rose said. “Our state’s transportation officials need to act while there’s still time to save these mountain lions.”

In December 2017 the Center and allies filed a lawsuit against the Altair project in Temecula, which would further fragment the Santa Ana cats’ habitat. The 200-acre project would include a mixed-use development and highway that would degrade some of the last remaining connectivity between the Santa Ana Mountains and Peninsular Ranges.

Have you ever heard a female Mountain Lion calling for a mate? A chilling sound indeed.