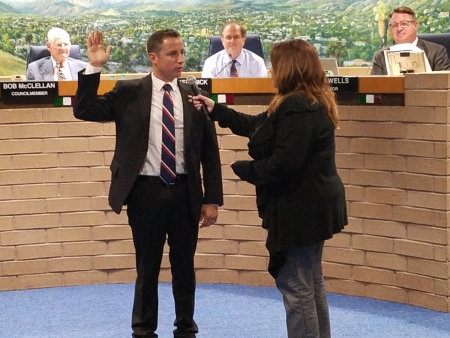 Owner and CEO of New Earth Energy Specialists Inc. and a pastor of Foothills Church, Ortiz is also an active community volunteer. He serves on the San Diego East County Chamber of Commerce board of directors and is founding member of the El Cajon Community Clean Up Group.  He has a B.A. degree in criminal justice administration from SDSU and a master’s in organizational management with emphasis in public administration.

According to his application with the city, his top priorities are public safety, including making retention of officers a priority, homelessness, including partnering with local organizations and having metrics to determine programs effectiveness, and having a balanced budget plus revitalization and incentivization to build on vacant lots.

Watch a streaming video of Tuesday’s evening's council session here and scroll down for details.

Each of the 18 candidates who applied for the position were given two minutes each to formally introduce themselves to the packed El Cajon City Council Chamber. After their introductions, existing councilmembers Gary Kendrick, Deputy Mayor Steve Goble, Bob McClellan, and Mayor Bill Wells pared down its choices to six potential candidates, with four candidates making the final cut. The four candidates were asked questions by the sitting city council on their on their philosophies on how they would govern as a member of the city council.

Kalasho resigned from the council in late March following a tumultuous and contentious tenure that began with his November 2016 election. In an e-mail letter of resignation sent to City Manager Graham Mitchell, he stated that he was tired of battling his fellow councilman. He also had been dealing with a litany of legal battles including a civil suit in which he was accused of fraud, defamation, sexual harassment and posting falsified nude photos of contestant in his privately-run Middle Eastern beauty pageant, which settled immediately before Kalasho;s resignation. His pageant’s nonprofit status was revoked by the state because Kalasho never completed a federal nonprofit registration. Court records indicated he took out numerous false IDs on Facebook that he used to bully and defame various individuals online.  He removed his Facebook and Twitter accounts after a lawsuit by activist Mark Lane, rather than comply with a constitutional requirement to not block or remove dissenting views. ECM reporter Paul Kruze and a process server each filed police reports alleging Kalasho threatened them with an attack dog, which he denied. Kalasho filed an unsuccessful complaint with the state alleging harassment and discrimination by the city.

Kalasho would have been termed out of his at-large seat in 2020, so ran against Councilman Kendrick in 2018 in an effort to win a new District 1 seat. Kendrick won by an overwhelming margin.

In a moment of levity, Councilman Kendrick asked Agundez, “If selected, you would be taking the place of a Council member that resigned. How would you be different from that Council member?” which caused the chamber to roar with laughter.

“First of all,” said Agundez who shared in the laughter, “I don’t think that would be too hard,” which caused those in the audience to laugh louder. Agundez evoked a serious tone afterwards saying, “We are human. We all make mistakes. We do. I do my best. By the grace of God I was able to survive the streets, I’ve learned a lot from the streets,” referring to the time when he was employed by the El Cajon Police Department. “But I have a lot of street knowledge. Sometimes that is what it takes,” he said.

During his introduction, Ortiz said to the San Diego Union-Tribune that one of his priorities was to develop a code of conduct for El Cajon Council members, commissioners, and personnel. “A code of conduct will make sure that our elected officials are always mindful that they are representing the city of El Cajon and treating everybody with respect, with honor and dignity.”

Ortiz, 34, who has been previously openly critical of Kalasho, struck a decidedly conciliatory tone when speaking about his predecessor. “I think I was one of the first people to speak out about Councilman Kalasho. He made some bad decisions. I hope that he moves on and comes up on top. I don’t wish him any ill will.”

Ortiz will serve two more years in Kalasho’s at-large term. In November 2020, the recently formed City Council Districts 2, 3, and 4 will be on ballot. Ortiz lives in District 4.

Ortiz’s first council session will be on May 28.

I sure hope Mr. Ortiz is a man of his word. It would be nice to have someone that will actually take the time to listen to the citizens, even consider their ideas and input, instead of the current ones who make all the decisions for us as if they know what's best. More democracy is needed in this city. Let the people speak and be heard. We have good ideas too, and just might have a better grasp as to what goes on here at street level, not just looking at statistical data on paper. An open door policy would be nice. Mark Lewis, the former mayor was very open and honest. One could call him with ideas or concerns, and I can tell you from experience, he would return the call usually by day's end and patiently listen, then solve the issue or take into consideration an idea given. I have a question for every city employee: how many of you actually live within the city limits and truly care about El Cajon? I'll not hold my breath for an answer...