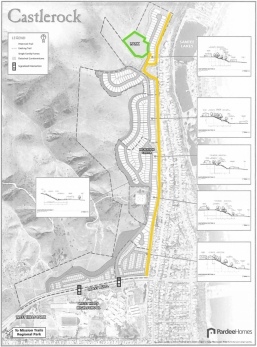 By Mike Allen
May 28, 2019 (Santee) -- Santee’s City Council approved the final phase May 22 on about $9 million in bonds that will be issued next month to pay for improvements and city services to the controversial Weston residential development, formerly called Castlerock.
The special tax bonds are completely supported from property taxes paid by the residents of Weston, which is located just west of Santee Lakes and off Mast Boulevard.
No city funding will be used to repay the bonds, which are being issued through two separate community facilities districts via a mechanism commonly used by many cities in California called Mello-Roos.
The actual amount of issued debt won’t be known until the debt is priced and sold in early June, but likely will come in at about $8.9 million although the special financing districts controlled by the city of Santee has the power to issue up to $9.5 million in debt.
The two districts will each pay for different costs. One is used to finance such items as the construction of streets, sewer and other utility lines, and fencing. The second district collects taxes from residents to pay for city services such as police, fire, ambulance, and park maintenance.
Santee Finance Director Tim McDermott said the bonding arrangement was requested by Weston developer Pardee Homes, and makes sense given that the project was not one the city ever planned or wanted.
“They (the city of San Diego) knew that Santee was actively fighting the project, but ultimately (Santee) had no leverage,” McDermott said.
Faced with the prospect of having to provide a host of city services to Weston, while losing all the property taxes to offset those costs, Santee reluctantly annexed the 204-acre project in 2016.
Construction gaffes by contractors working for Weston during the rainy season three years ago caused a surge of complaints from nearby residents, who lit up the phones at City Hall, and triggered so much negative publicity the development changed its name to Weston from the earlier appellation of Castlerock.
Perhaps due to the project’s unpopularity, the City Council approved the bonds by a 5-0 vote, but none of the five members made any comment about it.
As of early March, Weston completed 221 houses at the site. As of May 1, there were 198 houses that closed escrow, McDermott said. The project is expected to be fully sold by early 2022, he said.
The development consists of four types of houses priced from the high $500,000s to the high $700,000s, according to the company website.
Those prices don’t include the special taxes owners will be responsible for. These range from $1,230 to $1,895 annually depending on the home size to pay for the infrastructure improvements, and a flat, $272 annually for the city services that Santee is providing. The special taxes must be disclosed to buyers.
Those taxes will go to repay the new bonds. McDermott said it is highly unlikely the bonds would default as the most recent appraisal on the development, which is only about half completed, is $210 million, or about 24 times the value of the bonds issued.
A standard benchmark for similar bonds is having an appraised value of four times the amount of debt, McDermott said.
“We’ve also set up a reserve fund of 125 percent of the highest debt service payments, and there are strict foreclosure provisions,” he said. “This is a very safe community facilities district.”
The 30- year bonds are being underwritten by Stifel Nicholas & Co., and pay a true annual interest rate of 3.99 percent, but that depends on how the bonds are resold to investors. For example, the coupon rate for one-year debt is contemplated to be in a range of 2 percent to 5 percent, McDermott said.
The exact interest rate won’t be determined until the selling date, and the market conditions at that time, he said.
The new bonds will not in any way impede the city’s ability to issue future debt for other purposes such as funding a new community center. According to the city’s most recent financial report of June 2018, Santee had almost $60 million in long term debt outstanding. This includes revenue bonds of $2.18 million first issued in 2005, and $5.4 million in borrowings from the San Diego Association of Governments, the regional transportation planning agency, used to pay for street improvements.
While most of Weston’s infrastructure construction has been completed, there is one key piece that has yet to begin, a 4.5 acre park at the northern tip near the last of the Santee Lakes.
The park will consist of mainly open space, but has a restroom, picnic tables and a parking lot. It will be open to the public and have connections to the Stowe Trail that goes to Sycamore Canyon.
View concept renderings here.

It smacks of a load of new taxes and bonds on the people of Santee to facilitate a "Developers" project. I thought the planning commissions duty was to hold developers responsible for streets, sewer, utilities, fencing etc. as a condition of approval. A quiet vote of 5-0 approval? Perhaps bad judgment or bias by City Council?