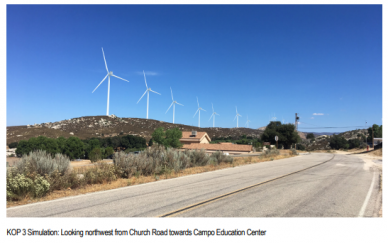 Wind power has been touted as a renewable energy resource to reduce use of fossil fuels and greenhouse gases, all worthy goals.  But smaller turbines in the Campo region have been trouble-prone.  An existing wind project on Campo tribal land has had its share of problems, including an unexplained explosion that knocked out all 25 turbines for months, resulting in litigation and rusted turbines left on the ground for years. On another occasion, a turbine burst into flames and started a brush fire, endangering a nearby home. Reports of stray voltage were documented by measurements taken by a consultant hired by concerned citizens, leading to a university study that raised questions over a possible link to high rates of cancer in nearby residents. That study called for further investigations, but none were funded. Residents have also complained of other health and noise issues as well as visual blight and impacts on wildlife, particularly fatal impacts on birds of prey.

Why don't they install solar panels instead?
Perhaps you missed, however the contact name is on the article to whom, you could call to get your answer.