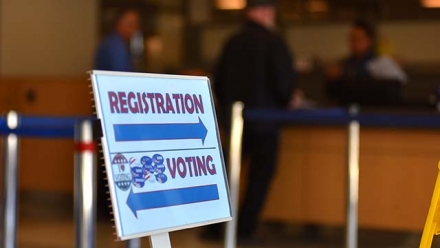 Welcome to the quirk-filled world of California election law. Here, voters without a registered political party can participate in the Democratic Party’s “open” presidential primary—but only if they ask for the right ballot.

Those who vote the old-fashioned way, in person at the polls, can simply request their presidential ballot of choice on the spot. But for those who vote by mail (now a majority of the state’s electorate), that request takes a remarkably analog form: a postcard signed and sent to the county registrar of voters.

If voters skip that step, the section of their ballot reserved for presidential candidates will be blank.

“Very few independent voters know that they have to do something to get the presidential ballot,” said Paul Mitchell of Political Data Inc., which analyzes electoral data for campaigns. He predicts the status quo could disenfranchise a million would-be presidential voters in California.

As political independents and absentee voters make up an increasing share of the California electorate—one disproportionately made up of non-white and young voters—that could leave a large, perhaps determinative, portion of the electorate confused and left out of the process.

Pending legislation by Assemblywoman Lorena Gonzalez, a Democrat from San Diego, won’t necessarily make the process easier, but it aims to at least ensure that voters get plenty of advance notice.

Her bill AB 681 would require county election officials to send three notifications to registered voters reminding them which party they’re registered with—and if they’re registered with no party preference but want to vote in a party’s presidential primary, that they’ll need to request that party’s ballot. (Assuming their party of choice allows them to; more about that below.)

Currently, county officials are required to send only one notification, a postcard asking independent voters if they want a “crossover” ballot. Given the timing of California’s March 3 primary, that reminder is likely to hit most voters’ mailboxes in November or December—squeezed between all the holiday cards, catalogs and bills.

With Democrats a supermajority in the Legislature, the bill is now in the Senate after sailing through the Assembly, despite almost every Republican voting no. No one argued against the idea, but GOP legislators were unconvinced that the price tag for the extra postcards—pegged in the low tens of millions of dollars—was a worthy state expense, not to mention that it might pump up participation among those less likely to vote conservative on the rest of the ballot. The League of Women Voters expressed support, noting that “voter confusion suppresses turnout, feeds a false narrative of unfairness or fraud, and destabilizes the electoral system.”

Along with the Democrats, the American Independent, Green, Libertarian and Peace and Freedom parties have traditionally allowed non-affiliated voters to participate in their presidential primaries.

But for over a decade, the Republican Party has been more exclusive: It has allowed only registered Republicans to cast ballots in its presidential contest. Independents who want to vote either for or against President Donald Trump in the 2020 primary will likely need to change their party affiliation to Republican. (The parties will make a formal decision about how to conduct their primaries later this year.)

The particular voting bloc that California omits by default from its presidential primary could be crucial this year.

No party preference voters (that’s election-speak for political independents) now make up the second largest political affiliation in the state, behind Democrats. They’re also by far the fastest growing group. That’s especially true since last year when the state began automatically registering Californians to vote when they applied for a driver’s license—with no party as the default choice.

At the same time, an expanding majority of California voters now vote by mail.

Combined, there are nearly 3.6 million independent permanent “absentee ballot” voters in the state, or roughly 18% of all registered voters, according to Political Data Inc.

Sure enough, in a follow-up poll after Election Day, he found that 45% of surveyed independent voters who cast their ballots by mail said that they wanted to vote in the Democratic primary but were unable to do so.

She heard from plenty of confused and angry voters on Election Day when many voters opened their mail-in ballots for the first time, only to discover that they hadn’t been given an option to vote in the most eagerly watched contest of all.

She was also sued. A voter registered with the far-right American Independent Party (but who, like many American Independents in the state, mistakenly believed she was a non-affiliated voter) requested a Democratic ballot at her polling station on Election Day and was denied.

“She sued and the judge ruled in her favor and allowed us to go ahead and count her vote for a party candidate, so that was cool,” said Pellerin. “I always tell people they can sue me, and she actually took me up on it.”

Pellerin said now that California allows same-day voter registration, litigation would no longer be necessary in that situation, since an erroneously registered American Independent will be able to switch affiliation to a lowercase “i” independent on the spot. But those voting by mail at the last minute will have a tougher time.

If past voting behavior is any indication, turning out a younger, less-white, less-consistently engaged contingent of voters will benefit Democratic candidates on the left. In 2016, a group of political independents backing Vermont Senator Bernie Sanders suedthe state for denying them the ability to vote in the state’s primary. They lost.

As things stand now, “if you’re not a hyper-aware voter, you might miss being able to vote for Democrats in one of the most exciting elections of a generation,” said Adriel Hampton, a political consultant who works with progressive candidates. “This bill does go a long way in helping address some of the problems we saw in the 2016 primary.”

But not far enough for some.

Chad Peace, a legal strategist for the Independent Voter Project, which promotes nonpartisan elections, said providing voters with more information would not fix the underlying problem. Unaffiliated voters still would have “a significantly more difficult time participating” in the political process.

His solution: Rather than giving independents a blank presidential primary ballot by default, offer them a “public ballot” with all the candidates of all major parties listed together.

It’s a proposal that would make the California presidential primary look much more like the top two primary system used for other federal and state races across California. But it would also run afoul of the primary rules set by the national parties.

So be it, said Peace.

The state should not be “subject to any consideration about a private national party’s rules in determining how they’re going to create a process that works for the voters,” he said. He added that the Independent Voter Project plans to sue the state “relatively soon.”

“I don’t think anyone wants to play chicken with millions of California voters’ votes,” he said. “But the flipside is you’re probably going to have a million voters who are going to be disenfranchised in 2020 in the primary.”

Typical Democrat lawmaker, having three notifications instead of one, causing more tax payer money to be wasted, and what for? Uninformed and/or illiterate registered "illegals" and non educated people in my country? What about the expense we have to publish everything many times because these people don't read or speak English? If the voting system is broken, then it is because of Sacramento lefties in Sanctuary California.
Obviously the voting system is broken, very unfair and must be fixed. As an 'independent', don't these folks want our votes? Exclusion of non partisan voters should be illegal. We should not be forced to register in a roundabout way with either party so we can cast a vote within a system where we are given the right to do so. Every citizen should be allowed to vote however they choose, even outside the party lines they're registered with.