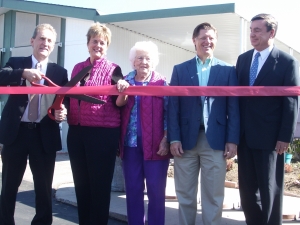 February 19, 2016 (El Cajon) -- Elected officials, state and local utility people and residents of the Heart ‘O the Hills Mobile Lodge in El Cajon gathered Feb. 18 to celebrate the completion of a natural gas and electric line upgrading, the first park in San Diego County to obtain such a conversion.

The conversion at the 46-unit lodge near Lake Jennings is part of a statewide pilot program launched in 2014 to provide increased safety and reliability to mobile home parks.

Park owners, mobile home owners, utilities, and trade groups knew their had to be a better way of doing things, especially in the wake of the tragic San Bruno gas pipeline explosion of 2010 that killed eight people. The result of many meetings was a three-year pilot program to convert 10 percent of the state’s 5,000 parks to direct metering for residents. 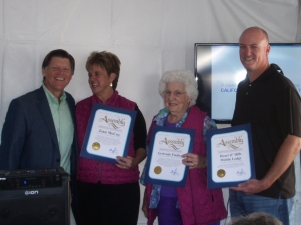 In the territory controlled by San Diego Gas & Electric, that means 30 parks are slated for utility upgrades. The Heart ‘O the Hills park was selected well over a year ago, with work on the conversion beginning last September, and finishing up earlier this month.

“This is all about public safety for residents and the community,” said Dave Geier, SDG&E vice president of electric transmission and system engineering. “We’re happy to have you now as our individual customers...our obligation is that if you have any problems, we’ll come out and have it fixed. We have guys on 24/7.”

Sunil Shori, utilities engineer for the California Public Utilities Commission’s consumer protection and safety division, which authorized the pilot program in its Decision 14-03-021, said master meter systems treated mobile home parks as small utilities, “which is a tough thing for a lot of operators to do...our intent is to get rid of these systems.”

Jean McCoy, the owner of the Heart ‘O Hills park, wasn’t sure why her development was selected to participate in the pilot program but is glad that it was. The gas and electrical systems require a lot of upkeep and filing of many forms as well as spending whenever there’s a problem.

“You have all these forms that have to be filed regularly, and to keep remembering to have things done, and the problems don’t happen Monday through Friday, 8-5, but usually on Sunday nights from 8 to 10,” she said.

And because all her residents now have smart meters outside their homes, they’ll have a better control over how they use their energy, and how much they are using. They are now eligible for cost reduction programs offered by SDG&E, McCoy said.

McCoy and another park owner, Gertrude Finley, were given awards for their coordination efforts by State Sen. Joel Anderson and State Assemblyman Brian Jones.

David Buczkowski, SDG&E senior director of major projects, said four other mobile home parks in the county recently had upgrades completed but Heart ‘O the Hills was the first to get both gas and electricity line upgrades. At least 20 other parks are slated to be completed by the end of this year, he said.

Buczkowski was unable to say what the costs were for Heart ‘O the Hills upgrades or the total estimate for SDG&E’s 30 parks. The costs will become more evident once the pilot program is finished in 2017, but all the costs are being passed on to all of the utility’s ratepayers, he said.

Jerry Fisher, a San Diego consultant for the mobile home industry, said an estimate he heard at one public meeting put the estimated cost per space at about $30,000, or an average of $3 million for a 100-space park. Yet if the project also involved replacing water and sewer lines, it could easily double that figure, Fisher said.

Little publicity has been done regarding this utility upgrade program because the costs will be so high, Fisher told ECM last month. “The public has no knowledge whatsoever about this program and the passing of this multi-million dollar situation on to ratepayers,” he added. “The bottom line is they’re not telling the public the whole story, what the true costs will be.”

Hanan Eisenman, an SDG&E spokesman, said because the PUC is overseeing the pilot program, all costs will eventually be disclosed. He said as true for every infrastructure improvement project that SDG&E does, the costs are shared by all ratepayers.

I reckon that it's really hard to upkeep the older blocks and residential buildings, so if there's a program to help to upgrade all of them slowly and improve the living situation for the people living in a community, then why not right? I am assuming that there will be little inconvenience to the residents while the program is running though, I don't think that these people will be able to afford mobile storage in Sydney if they're forced to vacate while the upgrades are proceeding.