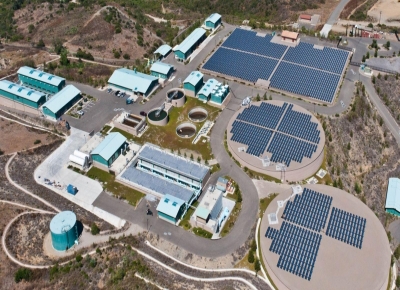 Overall water quality not compromised, but customers are being notified

Photo:  When completed in 2008, the Twin Oaks Valley Water Treatment Plant was the largest submerged membrane water treatment plant in the world and the first treatment plant built by the San Diego County Water Authority.

July 10, 2019 (San Diego) -- A malfunction at the Twin Oaks Valley Water Treatment Plant resulted in a citation from the state Division of Drinking Water due to a two-day failure of one of its systems that kills harmful organisms. The plant provides water to water districts across San Diego County including East County, but the County Water Authority assures that water in regional pipelines continued to be safe for all uses due to additional treatment processes.

The malfunction lasted about 15 hours on April 21-22, when ozone dosage levels in the plant fell below state-mandated levels because a valve failed to fully open. Ozone is a common disinfectant used in water treatment systems to kill bacteria and other organisms. To be effective, water must be in contact with the proper dosage of ozone for specific amounts of time.

When completed in 2008, the Twin Oaks Valley Water Treatment Plant was the largest submerged membrane water treatment plant in the world and the first treatment plant built by San Diego County Water Authority.

“Corrective actions were taken immediately, and the lapse was reported to state regulators. The contractor has updated its operational procedures and installed additional monitoring equipment to prevent similar problems in the future,” the CWA states in a press release.

If there had been a water quality emergency, the public would have been notified immediately. After the citation was issued on June 4, the Water Authority says it worked closely with impacted member agencies to follow state-manded noticing requirements.

“This was an unfortunate event, and we’ve put new procedures and equipment in place to ensure it doesn’t happen again,” said Sandy Kerl, acting general manager of the Water Authority. “We are committed to maintaining the high levels of safety and reliability we’ve achieved over more than 75 years of service to the San Diego region.”

The notices include a hotline number that Water Authority set up to address questions from the public at (858) 284-4142. In addition, the Water Authority has provided online resources at www.sdcwa.org/water-quality. Those resources include a map of affected areas searchable by address, the official public notice, the formal citation by the state and frequently asked questions.

Perhaps this is an example of sewer to tap going wacko! Perhaps the focus of water availability misses its target. There are thousands of acres throughout California that are under cultivation with grapes for wine. Where should California fresh water go and how should it be used? Grapes, food, drinking water.....................Just like our new 15% ethanol additive to gas......rise in growing food products to make fuel for engines misses the target. Ruining agriculture land for fuel? Priorities? California lawmakers are lost in the swamp.
I use a PUR, faucet mount water filter to further enhance filtration and get a much better taste. El Cajon water is through Helix Water District. I started doing this many years ago when their source had an algae bloom that caused the water to taste quite bad.

The water is now consistent year-round in taste and clarity.  These are fairly low cost and worth it in my opinion at least for drinking water.

The company name scares me. I don't like a "billion dollar global company" in charge of my drinking water. Profit over water quality. They will use the least amount of chlorine ,ferric chloride and potassium permanganate to meet water standards. Helix water  used to taste fishy, like lake water because they didn't want to use potassium permanganate that stains everything in the plant brown. The manager was a bit arrogant.