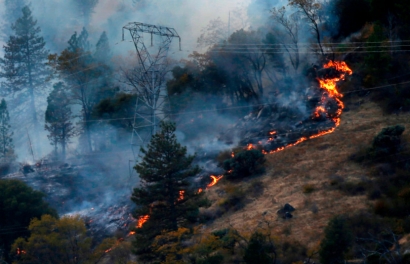 Is this a utilities bailout? Will it help prevent future fires? How will all this work? Here's a breakdown of the new plan California lawmakers are putting in place.

Photo:  The deadly 2018 Camp Fire burns around PG&E transmission towers east of Pulga, near the source of the first report of the fire. (Photo by Karl Mondon, Bay Area News Group)

July 14, 2019 (San Diego) -  You will be forgiven for having the impression that California lawmakers have been talking about comprehensive wildfire legislation forever, when it has only been days since the new fire bill ricocheted  from the Assembly to the Senate and back again. Gov. Gavin Newsom signed it today, less than a week after the first elected official cleared his throat to introduce the package.

It didn’t set a legislative land-speed record, of course, but some lawmakers did complain that they lacked sufficient time to read and digest such a complex document. What’s the rush? Where to begin?

Isn’t this just a bailout for California’s big utilities?

Kinda. One way to look at it is that the financial health of ratepayers, wildfire victims and utilities are intertwined. The first two groups need utility companies to maintain a beating heart in order to stave off higher electricity bills or to prevent being left high and dry after a utility-caused fire. So there’s some mutual self-interest at work here.

The law sets a June 30, 2020 deadline for the state’s largest utility—Pacific Gas & Electric—to emerge from bankruptcy, and requires that it settle with victims from 2017-2018 fires it caused before it can participate in other aspects of the state plan.

That timeframe was meant for an audience of one: Dennis Montali, the San Francisco judge presiding over PG&E’s bankruptcy case. Bankruptcy proceedings are notoriously thorny and can drag on for years. Lawmakers are hoping that the judge will see the law as providing the possibility of resolution and a way forward for the state’s largest utility—and thus accelerate the legal process.

The other unseen but loudly heard players here are the ratings agencies, which threatened to downgrade the credit scores for Southern California Edison and San Diego Gas & Electric. That would make it much more expensive for those companies to borrow money, a cost they would pass on to their customers.

So, as much as some legislators may have wanted to roundly punish bad actors among California’s electricity providers, they were mindful that even a slap on the wrist to utilities could have the unintended impact of a punch in the nose to consumers.

What about the wildfire victims’ fund? How does that work?

Actually the companies can choose between two proposed options. In either case, fire victims are compensated by the utilities, via the fund.

One is called a liquidity fund, and it establishes a $10.5 billion line of credit for utilities to draw from to cover fire costs that exceed their insurance coverage. If the company is later found to have improperly operated its equipment, it must pay back the amount it took out.

The second option is called an insurance fund. The fund will hold at least $21 billion, with half coming from the utilities and half from ratepayers from an existing state fund. (Ratepayers have been kicking in $2.50 a month for the fund, an amount that was set to expire.) Utilities will pay into the insurance fund according to a rough calculation of their liability and safety history: PG&E will be on the hook for about 60%, Southern California Edison about 30% and San Diego Gas and Electric, which has a comparatively better safety record, will be responsible for about 4%.

PG&E is barred from participating in either fund until it emerges from bankruptcy and all companies must comply with other requirements such as linking executive compensation to their firm’s safety record.

Utility companies have about two weeks to declare which fund they want to be part of, and the big three must agree. The state assumes they will select the insurance fund.

Will this pot of money help wildfire victims?

Without question, $21 billion is a lot of money.

But keep in mind that, given the ever-increasing frequency, size, intensity, and destructiveness of fires in California, the price tag to make victims whole is likewise exploding.

Consider, too, that PG&E alone estimates its liability for the most recent fires is in the neighborhood of $30 billion.

So, it’s an open question how long even a fund as large as that will remain intact.

What does any of this have to do with preventing or containing fires?

Yes, it seems as if there’s a lot about liability and bankruptcy but not much that speaks to the business of preventing or putting out wildfires.

The law requires the three big investor-owned companies to spend $5 billion to fireproof their equipment. They had already pledged to spend $3 billion in that effort, and that work can have a real impact. That’s things like insulating transmission and distribution lines, clearing trees and brush around equipment, replacing wooden power poles with steel or composite ones and placing protective covering over some infrastructure.

So that’s a big deal because so-called utility hardening projects can make it less likely that animals, wind, or tree limbs will interfere with power equipment and spark fires.

And, for the first time, the state is requiring utilities obtain a safety certification, setting a standard for safe and responsible operation.

In addition, lawmakers have indicated they intend to come back with a handful of other bills that more specifically respond to the underlying fire issues of vegetation and tree clearance, community fire safety, and other more-direct fire causes.

And legislators added a clever caveat: Even though utilities regularly pass on the actual cost of capital expenditures and 11% or more to their customers, this law specifically states that the companies may NOT turn a profit from spending $5 billion on fire mitigation projects.

About that safety certification…

Some critics warn that the certificate is a “get out of jail free card” for utilities. It sets a standard for a  “prudent operator” and affords a presumption that if a company received the rating, its operations are generally safe and prudent.

You may have heard the awkward term “inverse condemnation,” which means that California utilities are held responsible if their equipment causes a fire, even if they did not act negligently. That rule is in the state constitution and no one in Sacramento wants to take that on.

However, utilities get a little relief in the new law. Before this week, electric utilities blamed for fires had to show that they managed their system properly and safely. The law now flips the burden of proof to advocates and victims groups to show that a utility acted unreasonably.

If customers choose to use energy pprovided by solar or wind "farms" are they trading  one giant company over another who makes money while damaging desert ecology and killing birds? Local rooftop solar and battery storage sounds good, subsidise homeowners and small business. not  the giant companies.

Last I heard, these gas and power "delivery" companies moved away from actually producing a product and have become a middle man service company. That in itself escalates costs as most people that have had economics in school know. What I get from the bottom line of the article = "pass it on to consumers, us"! Nothing new here. Those utility companies are governed by the CPUC California Public Utilities for oversight, ethics, service etc. supposedly for the "public trust" part of our Government. We all get those inserts from the CPUC advising us of rate increases. Here you have an oversight organization that monitors Utility companies, that have golden halos, Common Stock dividend guarantees, give away's rate payer money to charities, rebates etc., without our permission and does not work off a bottom balance sheet line like the rest of Corporate America. What they need, the CPUC gives them. That is our "public trust". On to the issue of our illustrious new Governor and handicapped Legislature...............As our Federal lawmakers tripped over O'bamacare by NONE of them reading it before signing; so goes our State "Representatives", of us, taxpayers and ratepayers. Yes it was a hurry up slam dunk because the Rating Agencies do not work for us and our insurance rates and billing reflects that. Push it through before we wake up. We consumers are getting steam rolled and somehow, sometime, we need to react.

Community choice energy is an option our county and some local cities are considering but I don't think any have voted to do it yet, certanily non in East County.  If it occurs, cities or counties would buy power directly from whatever entities they choose, creating competition to SDG&E, though SDG&E would still providing the wiring and infrastructure and profit off that.

Community choice has rollled out in some other places in a few other California communities and has reportedly worked out fairly well for consumers.

But I do agree that the regulatory agency, the Public Utilities Commission, has been run for far too long by people who put industry concerns over consumers.