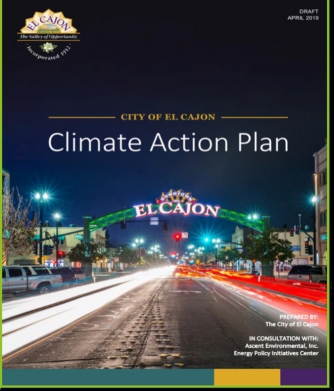 July 15, 2019 (El Cajon) -- In a unanimous vote, the El Cajon City Council voted to approve a climate change policy developed in conjunction with community outreach sessions earlier this year. But some critics contend the plan does not go far enough to reduce greenhouse gas emissions.

El Cajon’s plan took into account an inventory of existing greenhouse gas emissions, projected future emissions, and strategies to reduceemissions. It would push the city to using 80 percent clean and renewable energy by 2030.

Objectives were reached with a project webpage, press releases on sustainable strategies, a public workshop in May, outreach at community events such as the America On Main Street event, stakeholder meetings which included the Newcomers in Action charity, and a community survey.

While some were happy with the city’s step in this direction, numerous individuals from a political action group called “Climate Action Campaign” were critical of the city for not embracing a 100 percent goal of clean and renewable energy by 2030.

In a prepared news release sent out to San Diego news outlets on Wednesday, the group’s leader, Maleeka Marsden, complained that the city “fails families and children in El Cajon and the region by failing to protect public health, failing to clean the air, failing to meet state law,” and failing to what she characterized as a “twin climate and housing crisis.”

During Tuesday’s meeting, she testified, “We think this climate action plan is failing community members because it’s adopting half measures that don’t really commit to fighting climate crisis and are not enforceable.”

Several times, City Council members said the plan could be updated in the future. City Manager Graham Mitchell expressed the last words after the plan was passed when he stated, “This is about adopt and adapt.”

Marsden did a lot of complaining, however the "green and global warming" is still a 21st century ideology. Progress is not accomplished by complaining and facts should be driving bureaucrats based on science, history and facts. Too many grand-standers with empty issues.