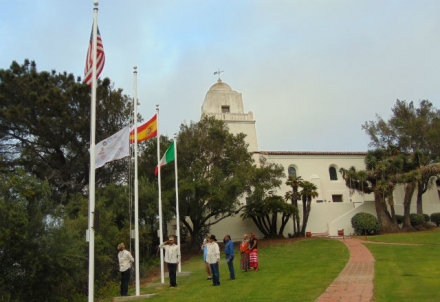 Photo:  The Kumeyaay flag is raised at the Presidio to celebrate San Diego’s 250th anniversary. Photo by Chris Jennewein

On the hill where Father Junipero Serra blessed the first Spanish mission in California, the Kumeyaay flag was raised alongside those of the United States, Spain and Mexico.

“We are establishing the fact that our Kumeyaay friends and neighbors are part of our past and our future,” said Mayor Kevin Faulconer.

More than 500 people listened as all of the political and tribal leaders emphasized the diversity of San Diego’s past — and the need for inclusiveness in its future. 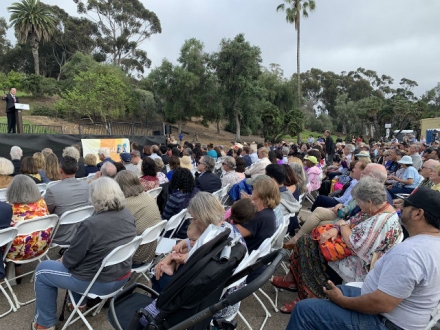 “History shows us a path forward to a more inclusive future,” said Atkins, who said it is important to present an “unvarnished” story of San Diego’s rise since the founding of Mission San Diego de Acalá on July 16, 1769.

The civic birthday celebration of diversity and inclusion came on a day when the House of Representatives passed a resolution condemning President Trump for telling four Congress members from immigrant families to “go back” to the “places from which they came.” Trump wasn’t mentioned at the Presidio, but there were echoes in many of the comments.

“E pluribus unum … out of many one,” said Faulconer. “What good is that motto if we don’t endeavor to live by its ideals?”

The event was organized by the San Diego History Center, which is renovating the nearby 1925-era museum to include an extensive exhibit on Kumeyaay history in addition to the story of the European colonization.

Angela Elliott Santos, chairwoman of the Manzanita band of the Kumeyaay Indians, said the celebration is both a milestone for the Kumeyaay nation and a “bittersweet” moment because of centuries of suffering.

“For the first time ever, the Kumeyaay have been asked to participate and share the real story,”  she said, but only after “our ancestors fought with every breath to save our core values.”

But there was also a message of optimism for the future.

And Gloria, who is himself an enrolled member of a native American Indian tribe, said, “The last two centuries indicate that we are capable of coming together.”

The true history of the Kumeyaay people, and all Native Americans needs to have light shed upon what really happened not so long ago.