August 1, 2019 (El Cajon) – A jury in a civil trial has ruled that an El Cajon Police officer was justified in shooting and killing Alfred Olango on Sept. 27, 2016.  Olango’s sister ,Lucy,  had called 911 to ask for help for her brother, who was reportedly suffering a mental health crisis and walking into traffic.

While another officer pointed a taser at Olango, Officer Richard Gonsalves asked Olango to remove his hands from his pocket,. Olango pulled out a silver and black vape smoking device that resembled a gun and pointed it at the officer, assuming a shooter’s stance at point blank range. 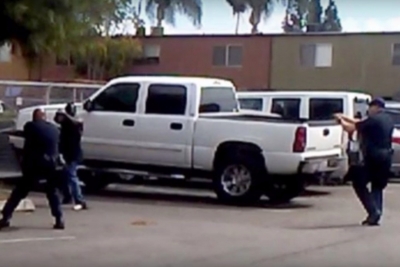 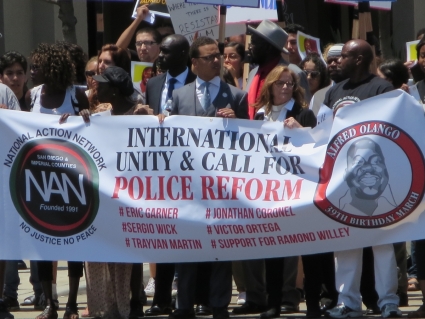 Olango pointed was a gun and that he fired in self protection.  (Photo, right)

Police have indicated Gonsalves was also concerned that if Olango fired shots, they could strike people at a drive-through taco shot or in the parking lot, both within the line of fire.

The shooting of Olango, an African American, by a white police officer led to days of marches, protests and rallies in El Cajon, heightening racial tensions. The demonstrations forced closure of Parkway Plaza shopping mall and public events in the downtown district.

Lucy Olango has criticized police for escalating the situation into a “deadly confrontation.”

A Psychiatric Emergency Response Team (PERT) was not available due to being dispatched on another call. Activists have called for reforms, including more PERT teams for the region and de-escalation training for police officers.

El Cajon Mayor Wells issued this statement after the verdict:

"Almost three years ago, a tragic incident occurred in El Cajon that resulted in the death of Alfred Olango.  I recognize that this was a tremendous loss with pain experienced by the family of Mr. Olango and by our community.  Yesterday, after hearing closing arguments and reviewing evidence, a jury unanimously concluded that the El Cajon Police Department’s conduct was reasonable and responsible.  I am proud of our police department and our community.  I am proud of our resiliency.  Now that the court proceeding has concluded, I hope that we can continue our work in strengthening the relationship between the police department and the community and to work together to heal and to find peace."

You get a cop response to what is happening. Expect guns drawn, vicous dogs, agressive behavior. When one gun is fired sometimes all the police fire their weapons. Pistols and shotguns. Call your pastor, or community leader.