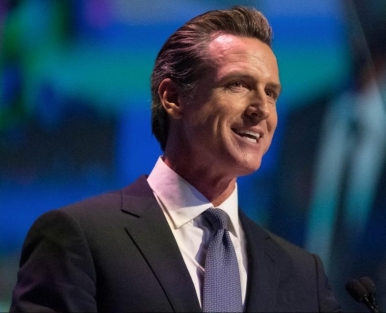 By Miriam Raftery
Photo:  Governor Gavin Newsom; photo by Ron Logan
August 17, 2018 (San Diego) – Governor Gavin Newsom won the election in November over Republican John Cox by a whopping 62% to 38% margin. But in a pattern increasingly being deployed by Republicans seeking do-overs of elections across the Western states, an effort to recall Newsom has been launched.
If the recall qualifies for the ballot, it could cost California taxpayers an estimated $81 million. The recall effort is the brainchild of Dr. James Veltmeyer, a La Jolla physician who twice ran for Congress and lost in two different districts, vying against Susan Davis and Scott Peters.
The last time California recalled a Governor was in 2003, when Democrat Gray Davis was ousted in a recall led by Darrell Issa, the former San Diego Congressman.  Davis was replaced in a special election by Republican Arnold Schwarzenegger. 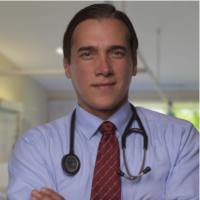 Veltmeyer (photo, right, via Veltmeyer) faults Newsom’s support for healthcare coverage for undocumented immigrants which he claims would be a “magnet” to attract more immigrants and raise healthcare cost, according to his Facebook posts. He also opposes proposals to add new taxes and sanctuary city policies, as  well as blaming the new Governor for homelessness in major California cities, though the problem predated  Newsom’s election as Governor.
Newsome, in a response filed with the Secretary of State’s office, says the recall is being “pushed by political extremists supporting President Trump’s hateful attacks on California.”
The Governor notes that his budget is balanced and the state’s reserves are unprecedented. “Our state economy and employment have hit historic highs.”  He adds that he has lived up to his campaign promises to increase funding for public education, protect and secure healthcare, improve water quality, roads and bridges, and prepare California for wildfires.
Recalls were once reserved for corrupt or inept officials, but have increasingly become politically weaponized, Associated Press recently reported.
If the Secretary of State approves the wording of the recall language, nearly 1.5 million signatures of registered California voters would be required.  The earliest possible date for a recall election, if supporters gather enough signatures, would be July 3, 2020, Times of San Diego reports.

Let Veltmeyer finance his absurd effort to waste 81 million of our tax dollars. Gavin has accomplished more than the last 5 governors. He stays.
Yes, I would like a recall of Newsom. I am not a political extremist. Newsom is the wrong person for the job. Enough of the nepotism in his family. They have been running this state into the ground for many years.