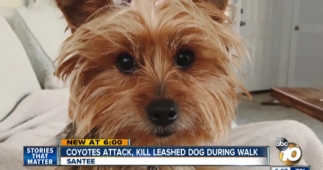 The most recent attack occurred Tuesday, when Cimmarrusti was walking her Silky Terrier, Presley, on Palm Glen Drive near her condominium.  She told 10 News, that as she tugged on her dog’s leash after aggressive coyotes approached, the clasp broke and her dog ran off with the coyotes in pursuit.

“I kept screaming at the top of my lungs for his name,” she said.  A neighbor found the mortally wounded dog, who died in Ciammarrusti’s arms on the way to an emergency pet clinic. She later learned that coyotes killed another dog in the same area in recent weeks.

Such attacks are not uncommon.  Dogs have been snatched off leashes in other local communities including Mt. Helix, Fletcher Hills, and Peñasquitos.

How can you protect your dog from coyotes while on a walk?

Coyote vests and spiked collars were designed to ward off coyotes by an owner who lost a dog previously to a coyote attack. They are available at https://www.coyotevest.com/.

Carrying an air horn, bear spray or pepper spray may dissuade a marauding coyote. One woman in another city reportedly recently halted a mountain lion attack by turning on loud heavy metal music on her cell phone.

Hazing coyotes frequenting your neighborhood, such as making loud noises or tossing rocks near them, can help dissuade them.

Coyotes are most active in evening, nighttime and early morning hours, so if you have an option to walk your dog during the day time it lessens the odds of an attack.  You might also consider taking our dog to a dog park or area where coyote encounters are less likely.

An additional option is to build an enclosed run or kennel with a roof to keep out coyotes and other predators such as mountain lions, bob cats, or even hawks and owls capable of carrying off a small dog or cat. For cat owners, a “catio” can serve the same purpose, allowing pets safe outdoor and exercise space.

What the article and the poor lady didn't say is that her little dog attacked the coyotes. Not very well of course as she was around 8 pounds. But the owner said that the dog went around the corner of a bush and tugged hard on the leash, i.e., lunging at the coyotes. The coyotes then attacked back. If it were the coyotes attacking first, they would have kept the dog for food. Instead, the coyotes attacked and left the poor little pooch to die.