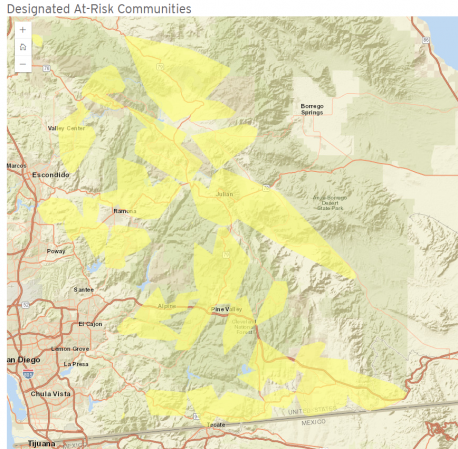 October 23, 2019 (San Diego’s East County) – SDG&E is warning of a new round of potential power-shut offs that could affect up to 23,944 customers, with a red flag warning from 5 a.m. Thursday through 5 p.m. Friday evening.

The utility’s site states that it makes several efforts to notify ratepayers prior to shutoffs. In many cases the system worked to provide customers with time to prepare for outages.  However, some rural residents have posted complaints on social media stating that they received repeated warnings of shut-offs that never occurred, and later had power shut-off with no warning.

“SDG&E insanity. Last week we got a letter saying the power would be turned off on Monday and then another letter saying the power would be turned off on Friday, Well they turned off the power on Monday, but not Friday. Then we got a letter saying the power would be shut off on Wednesday (tomorrow). Then I got an email saying the Wednesday outage was canceled. Tonight I got a phone call reminding us of an upcoming power shut off, but did not say what day. Then a bit later I got a phone call from them saying that due to predicted Santa Ana wind conditions that our power could be shut off anywhere during the next 24 to 48 hours, and would stay off until the winds cease and all lines are inspected before they can turn the power back on. This is the insanity we live with SDG&E. Our lives are on edge, never quite sure if we will have power or not. We are constantly preparing for outages that never happen, or have out power cut off with hardly any warning. This no way to run a power company. It is quite obvious they care nothing about their costumers and everything about their profits. I hope some of you people who are tired of me complaining about SDG&E will start to understand what they put us through. A monopoly with all the power........”

Meanwhile in Sacramento,  more elected officials are paying attention to the negative impacts of planned power outages and calling for reforms.

After PG&E shut off power to over 700,000 customers, impacting 2 million people earlier this month, one man died of heart failure after his oxygen equipment was shut off without notice.  The California Public Utilities Commission grilled PG&E executives after complaints of website and call center failures and poor communications with local governments regarding outages. The company has said it will work to narrow the scope of future outages but has again warned of widespread outages this week.

Gov. Gavin Newsom wrote a letter Tuesday to PG&E CEO Bill Johnson, saying, "I expect PG&E to address its failures” from the recent stuff event. He cited a prior letter, reiterating, "PG&E shareholders have an obligation to its customers following the failed execution of its previous PSPS decision. I continue to strongly urge PG&E to issue automatic rebate or credit of $100 per residential customer and $250 per small business as some compensation for the hardship suffered."

PG&E, in its response, said it would not commit to a rebate or a credit and that it's focusing on reducing wildfire risk. PG&E said, in part: "The State of California’s current electric tariffs do not call for reimbursement for weather- or safety-related outages. A PSPS is a weather-driven event. We remain open to future policy discussion with lawmakers and regulators on this matter, and many other wildfire-safety related policy issues."

ECM has emailed the Governor’s press office to ask if Governor Newsom will call for action to protect SDG&E ratepayers subjected to power shut-offs due to extreme fire conditions, as he has done for PG&E customers.

Meanwhile in San Diego’s backcountry, some who suffered recent outages have tried to look at the bright side of being left in the dark.

Kevin Wixon posted a photo of fall foliage on the Julian Connection Facebook page earlier this week, along with this note during an outage that the utility has since indicated was unplanned:

“Well, SDG&E says power not back until tomorrow.  In the meantime... maybe some fall colors and a contemplative scene will help ease the anxiety?” He added, “I also noticed lots of stars in the sky. Since the tv isn't on, maybe some star gazing is in order?”

SDG&E has now positioned a generator in Julian to keep the town's downtown district from going dark if a planned outage is needed during the current high-fire conditions, according to posts on the Julian Connection.

Update:  On Thursday morning, the utility has also announced that is has opened these resource centers for residents to get water and snacks, charge phoones and get updates on outages:

Twenty four thousand customers. If there's four people in a home is that almost one hundred thousand people.