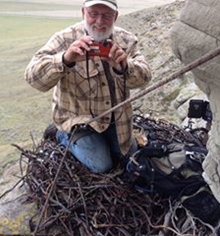 January 11, 2020 (Ramona) – John David "Dave" Bittner, 75, of Julian was known to many for the “Hawk Watch” programs he led for decades at the Wildlife Research Institute in Ramona that he founded, and later at the Begent Ranch.  On Thursday, Bittner died of a 50-foot fall suffered while rappelling down to replace batteries and memory cards in a camera near a Golden Eagle nest in the Bandy Canyon area in the San Pasqual Valley.

“We will miss him dearly and are so thankful for his work and dedication to saving wildlife and their special habitat,” the Wildlife Research Institute posting on its Facebook page.  The institute, of which Bittner served as director, pledged to continue hosting Hawk Watch and planned an impromptu memorial service this morning at the Begent Ranch.

Bittner and his wife,Leigh, had a passion for protecting wildlife and purchased 3,000 acres that they donated to the county to buy the Ramona Grasslands preserve and sell property to the Nature Conservancy as a wildlife preserve. That is home to many raptors, including bald eagles.

“His life was dedicated fully to his love of wildlife and wild places,” Katie Quint, who worked closely with Bittner, said, 10 News reported.

He was considered a top local expert on eagles, studying the nesting ecology locally of Golden Eagles and Bald Eagles for the past three decades.  His Hawk Watch educational programs have also highlighted hawks, falcons and owls.

Bittner’s work included studies on eagle habitat commissioned by energy companies for major projects including Tule Wind in McCain Valley+, Ocotillo Wind and the Energia Sierra Juarez project in Mexico. Bittner’s work on those projects drew controversy in 2013, when he pled guilty to failing to file data reports on some banded birds and to unlawful taking of one Golden Eagle without a permit. He was sentenced to probation and a fine.

Bittner told ECM at the time that his permit was dormant for a period and that he submitted more bands than the government had on record. He objected to turning over location of eagle nests to the government, stating that he feared the public would learn the locations and encroach on threatened or endangered species.

On Thursday,  Bittner called for help after his fall and a friend dialed 911. A Sheriff’s helicopter aided in extracting Bittner, who died at the scene. It is unclear what caused him to fall, but the Medical Examiner’s report indicated he had cardiac arrest as well as a head injury before his death. The nest he was documenting as active was among the first in his study of eagle nesting, according to the Wildlife Resarch Institute, and was recently threatened by potential trail development.

The Wildlife Research Institute has vowed to continue the Hawk Watch programs that educated the public on the majesty and importance of raptors, or birds of prey, “to keep his legacy shing on without hesitation.”

The Hawk Watch programs, which are free to the public, are available each Saturday in January and February at 10 a.m.  To learn more about Hawk Watch or to donate to support the Wildlife Research Institute, visit https://www.wildlife-research.org/?fbclid=IwAR1pSadEwmEn9AH-Pw9rsSUgNAE1gieqVps6gEVBPQuyxdiSMG_vhQU4T8o.

A prior article from ECM details exactly how much of an "asset" Bittner was to Wildlife. No trail development was threating this nest, who made that statement? Self serving WRI? A buddy F&W Biologist? This was a closer, active trail for many years while Eagles nested, is now rerouted a mile away, unreachable from the trail and in many locations along it not even visible to the nest, which is on PRIVATE PROPERTY. The biggest threat to any nest was Bittner himself, who states that river rafters a thousand feet below "disturb" a nest site, while he hovers helicopters next to them for high paying customers to take pictures, claiming helicopters do not disturb a nest site! Bittner, who constantly harasses sites, rappelling down to them, once dropping an Eaglet to it's death while banding it at this very nest. Selling out to those 3 Wind Farms for 600K as a "expert Consultant". His permit was dormant for decades. You cannot donate and sell the same property as this article reads. He had ELEVEN dead Golden Eagles in his freezer, unlawfully. His constant captures for telemetry "monitoring" resulted in a 90% mortality rate which he lied about, and was far the beyond the 20% norm. Running Eagle viewing businesses in Montana and Panama, but will not turn over data because people might find out where nests are! Apparently Bittner felt those nests were for him only, he does not own the Eagles or even the nest sites, yet felt he had the right to control them. He should not have been on that cliff face, setting up for another season of "research" (harassment). I hope now the Eagles of this County and other states he had businesses in, can live in peace.