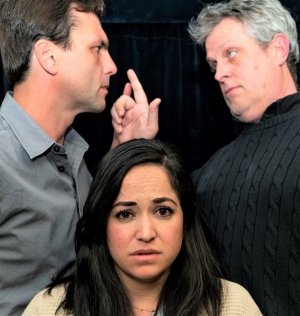 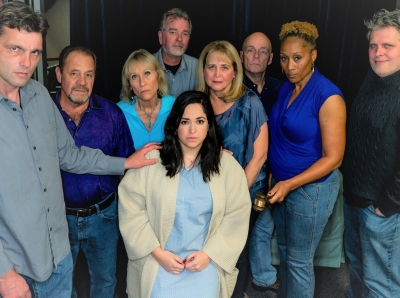 Photo (right): Cast
One element I did not like in the story is: we do not hear the details of the murder. This is solely whether or not the defendant is mentally capable to stand trial. Fascinating, and a story we the audience loved as a drama, but still I would like to have gone there. But that is not what Topor did.
PowPAC actors blew us away in the courtroom. Andrea Acuna (center, right) played the defendant, a character one does not really like but she did a heck of an acting job. My favorite role was David Dartt as Dr. Herbert Rosenthal, the psychiatrist. I've seen roles like this portrayed many times on television; he nailed it. His acting would be a credit to any lawyer show. Steve Murdock, actor about town, plays the prosecutor, a kinder version than most you see. The defense attorney is played by Pete Zanko. He could be your friend from across town, standing up for what he believes to be the truth. 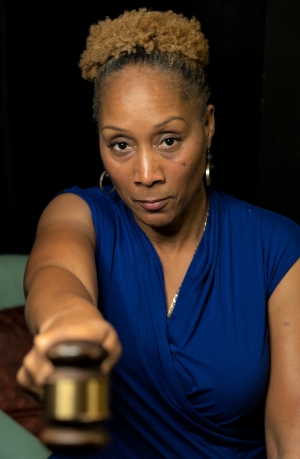 Photo (left): Denise Griffin as Judge Murdoch
Presiding over the hearing admirably is Denise Griffin as Judge Murdoch.Then we have the defendant's parents, played by Dennis Floyd and Linda Snyder, coming from a place of love. Rounding out the cast are Ariel Schilawski, court reporter, and good old Officer Harry, played by Bert Schilawski--a husband and wife team who inspire the trust in the courtroom
A three act play with two intermissions, “Nuts” is recommended for those who love the thrill of right and wrong being played out.
"Nuts"
Jan 24 - Feb 23, 2020
PowPAC Theatre
13250 Poway Road
858.679.8085
www.POWPAC.org
Up Next:
"Murder On The Nile" by Agatha Christie
Mar 20 - Apr 19, 2020

Kathy liked it so much she's calling for a prequel :)