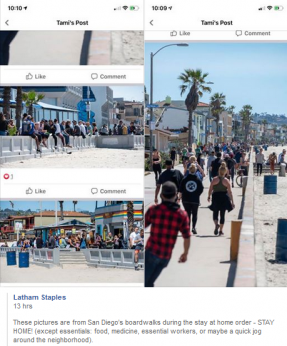 March 22, 2020 (San Diego) – This weekend, crowds of mostly young people defied orders by the Governor and San Diego County banning groups of 10 or more and requiring social distancing of six feet.  As a result, police shut down parking lots at city beaches, some parks were ordered closed, and Cleveland National Forest closed down trails to Cedar Creek and Three Sisters Falls in East County.

Tonight County health officials announce that 205 people in San Diego County have tested positive for COVID-19, including 178 county residents and 16 non-residents. The first death of a San Diego resident from the new coronavirus occurred after the man, who was in his 70s, traveled to Hawaii and was being treated in Santa Clara County.

Health official emphasize the urgency of flattening the growth curve of the virus as fears mount that hospitals may soon be overwhelmed with more critically ill patients than respirators. Locally, at least 500 people are on ventilators and the region has only 824, excluding military hospitals.

Nationwide, 34,717 cases have been confirmed and over 450 people have died.

Now, the ability of more laboratories to perform testing greatly increases the capacity to detect the COVID-19 virus in our region and reduce the time it takes to get test results and act on those results, county officials say. One newly approved test by a local biotech company can produce results in 30 minutes.

But testing is still largely limited to those who are hospitalized with severe symptoms; those with mild to moderate systems are being asked to self-quarantine at home.

Even people with no symptoms could be contagious, since it can take anywhere from a few days to 14 days after exposure for symptoms to appear, but the infected person is still shedding viral material that can infect others.

Below is the latest breakdown by age of the local coronavirus cases:

Surgeon General Jerome Adams on Monday reiterated an urgent call for Americans to follow recommendations to stay at home in order to mitigate the spread of the coronavirus. “I want America to understand this week it's going to get bad,” Adams said Monday in an appearance on NBC’s “Today.” . .here
set by the Centers for Disease Control and Prevention are tested. That threshold includes a fever of at least 100.4 degrees, symptoms of acute respiratory illness and a connection to a known COVID-19 case or recent travel to a high-risk area. Symptoms may appear 2-14 days after exposure, but the other requirements must also be met for testing. Anyone not meeting any part of all these criteria, say no connection to a known COVID-19 case, is not eligible for testing. So an asymptomatic (no symptoms) person, or a person with only some symptoms but not other threshold requirements, may spread the virus for two weeks or more without anyone's knowledge, which means everyone should employ social distancing and hand-washing at all times. . .here