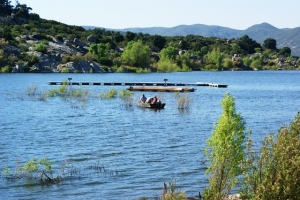 Solving the problem will take more money than the small rural district can afford. As a result, the state is mandating that to receive funding help, the district must be combined with the neighboring Oak Shores Municipal Water District which serves Lake Morena Village – even though customers in that district previously voted against consolidation.

According to the State of California, infants under six months old and pregnant women should not drink water with high nitrate levels. Infants who drink nitrate-contaminated water or formula made with the water can develop blue baby syndrome, which causes blue skin and if left untreated, death.  High nitrates can also affect oxygen-carrying ability of the blood in pregnant women. Wellman Simmonds, president of Lake Morena Views Mutual Water Co., says that the warning also includes “elderly and those who are sick to not utilize the water for cooking or drinking.”

The nitrates are most likely from runoff of agricultural sources such as fertlizers and/or from septic systems.

Initially the district was giving bottled water to all residents. But when stores began rationing sales of bottled water, the district was forced to instead advise residents to go to the Lake Morena Malt Shop and obtain quarters provided by the district to purchase one gallon of water per day, per family member, from a Glacier Water machine. Those who want more water, such as for pets, must purchase it.  Meanwhile, residents continue using tap water for washing dishes and bathing.

On March 26, resident Debi Rice posted on Facebook, “Does anyone in the Upper Village have an update on when we may have drinkable water again? The timeframe gets more desperate every day.” But she noted, “Our little water company has been through hell. Even with all the adversity, the alternative is to drill our own well,” a costly option with no guarantee of getting safer water.

“We’ve already put $20,000 into this out of our shareholders’ money,” Simmonds told ECM in an interview this week.  “Now we need another $13,000 roughly to put a nitrate monitoring system in that would be automatic.”  But the district takes in only about $15,000 and has $11,000 in expenses each billing period. Now with the COVID-19 shutdown, “We’re working on it the best we can, trying to keep down expenses for everybody.”

The district is hoping for a state grant, but that would be contingent on merging with Oak Shores, which has submitted a signed board resolution to agree consideration of consolidation, Lake Morena Views reported in early January on a Facebook page for water district customers. The new nitrate monitoring system must still go through county planning and engineering reviews.

The district has been plagued by other problems. One well has been shut down for some time due to natural uranium contamination not uncommon in deep rural wells in the region. In late 2016, the district was cited by the County for violations of the California Safe Drinking Water Act. The agency also had its nonprofit status revoked by the IRS for failing to file required documentation for three consecutive years in the past, City News Service reported.

A recent post on Facebook claiming high chlorine levels, however, was false, Simmonds told ECM.  That post has since been removed. Wellmond said a test last week measured Wednesday and again Thursday found chlorine levels of 0.46 each; the maximum allowed is 2.5.

Nitrate levels fluctuate depending on a variety of factors including rainfall and runoff.  The maximum nitrate level allowed by the state is 10 mg/L.

Simmonds says his own household is using bottled water to make soups and rice, as well as for drinking.  “We are asking the state and county to expedite our testing and permitting of the interim water treatment system, however we must still save money for the required constant nitrate monitor with automatic shut-off as required for the permit.”

If all goes well, Simmons hope to have the new nitrate monitoring and shut-off system in place by “most likely June,” adding, “I’d like to get it done sooner if possible, but we don’t know what kind of costs we’ll run into—or how many people are going to be able to pay their bills this time.”

I'll donate $100.00 to purchase water from Sparkletts to be delivered to the residents. Will anyone match my offer?