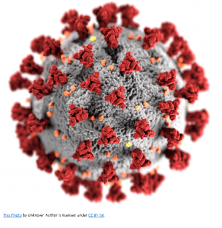 San Diego County health officials  also urged local residents to avoid experimental treatments for COVID-19, stressing that there is no known cure yet for the illness.

In a briefing on Tuesday, two county medical officials specifically warned against hydroxychloroquine, an anti-malarial medication touted multiple times in recent days by President Trump. “We are not recommending this medication,” said Dr. Wilma Wooten, the county’s chief health officer.

While not FDA approved, the medicine is being allowed by the FDA in serious cases as an experimental treatment, but can be fatal to those with heart problems or certain other conditions, and should not be taken except under a doctor's supervision, medical experts warn the public.  Deaths have occurred in multiple countries among people who attempted to self medicate with the drug.

The ban on small gatherings comes after people continued congregating in parks and other open spaces, ignoring orders to stay home except for essential activities such as getting groceries, going to the pharmacy or exercising.

The revised order also expands the requirement for employees of certain businesses to wear face coverings to now include banks, public transportation and child care providers that serve food as well as grocery stores, pharmacies and others included in a prior directive.

The Navy Face has now ordered for all 50,000 Sailors, Civilians at Naval Base San Diego to wear face masks as well. 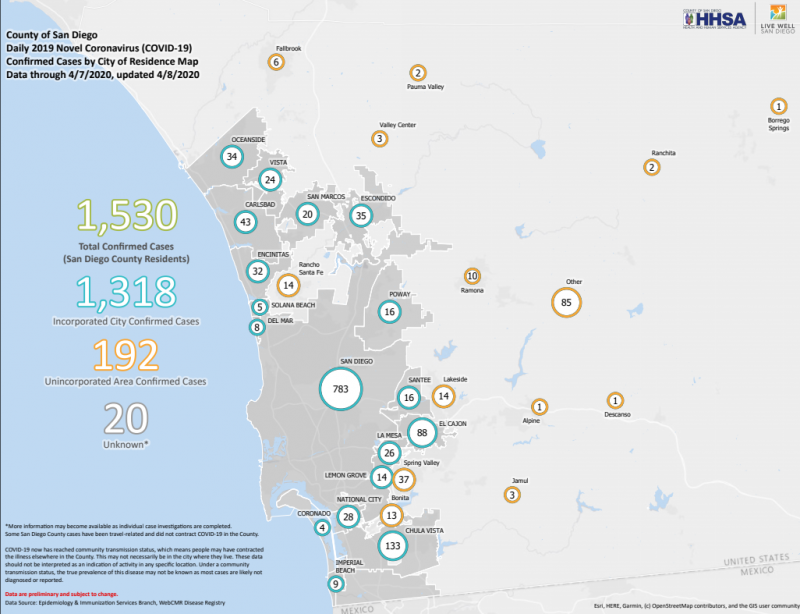 There have been 1,530 cases of coronavirus disease and 36 deaths among San Diego County residents as of Wednesday afternoon.  County officials also clarified a prior racial breakdown of cases, adding that none of the 36 deaths to date have been among African-Americans.

Across California there have been 16,957 cases and 442 deaths as of Wednesday afternoon.

Across the United States, there were 432,496 cases and 15,774 deaths as of late Thursday morning, according to Johns Hopkins University.

Scripps Health launched the fastest available point-of-care test for detecting the coronavirus at its five hospital campuses in San Diego County. The system from Abbott can deliver a positive result in as little as five minutes and a negative result in 13 minutes.

40, 50 or 60 Covid deaths out of 3.2 MILLION people. Not even close to regular flu deaths and almost all elderly, compromised people that did not die of Covid, but complications from other health issues. Even if it hits 200,00, that is out of 33 million people. Is that worth shutting down this country, ruining lives and businesses over? Numbers scarce on how many are really recovering (because most are), and that Newsom, after crying wolf about how people were going to die because we did not have enough Ventilators, is now sending our Ventilators to other states to "help them out"? Or one week that Masks really were not effective except in a health care setting is now the dressware or all? Too much conflicting, untrue info out there.
the federal government does not keep a formal tally of the number of coronavirus deaths in nursing homes or the number of facilities with infections, the Centers for Disease Control and Prevention said.. .here . .but nursing homes are a problem, especially in Kirkand Washington but alo elsewhere: Recent outbreaks in Tennessee, New Jersey, Ohio, West Virginia and Maryland have pushed the death toll at the nation’s nursing homes to at least 450 and highlight the biggest gap: Screenings of doctors, nurses, aides and other workers do not involve actual testing but the taking of temperatures or asking health questions that still allow infected, asymptomatic people to slip through. . .here
We could probably all, or many of us, walk around at jobs and activities with masks and get through this without all the heartbreak and depression that's going to take its toll because of the draconian assault on especially the poor citizens, which is many. It has been reported that a large majority of citizens had less than a thousand dollars saved for emergencies. . . .Also there's been a lot of fudging of the numbers. The "cases" figures have no real definition, they are just numbers. . . the CDC doesn't report COVID-19 fatalities only IDI -- influenza-like illness -- which includes COVID-10 and pneumonia. Today's weekly CDC Report says: "The percent of deaths associated with pneumonia and influenza is above the epidemic threshold. The increase is due to an increase in pneumonia deaths rather than influenza deaths and likely reflects COVID-19 activity." . .here. . . . .New York State, where there are many flu-like deaths, doesn't report influenza deaths here and so on. . .We may conclude that they really don't know the cause of death for most.
How come there not looking into what is called a spike,that Dr Salk and his team of scientist working on a cure and think they found it.it is 400 needle on a bandaid made of sugar and protein that you put on your finger tip,this is also comming from the Dr that found the pollio vaccine....
San Diego County 36 COVID deaths compares to 86 influenza deaths (March 11) this season. . .the estimates for US COVID deaths has gone down from 100-200K to 60K, which compares to 61K influenza deaths in 2017-2018 . . . America’s major medical society specializing in the treatment of respiratory diseases -- American Thoracic Society -- has endorsed using hydroxychloroquine for seriously ill hospitalized coronavirus patients.