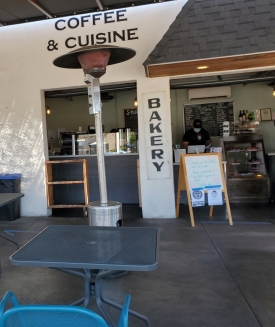 Photo, left: On Friday, Sheldon's Station in La Mesa prepared for reopening with new socially distanced tables. The owner told ECM  that despite offering curbside pickup, he's lost approximately 60% of his business since the shutdown began in mid-March and has not received any federal aid, for which he applied.

May 24, 2020 (San Diego’s East County) – On social media, East County residents shared reactions to decisions by state and county officials allowing restaurants to reopen for dine-in service and retailers to allow customers inside stores after a two-month closure due to the  COVID-19 pandemic.

While some voiced joy at savoring a meal out, other expressed trepidation.  Local healthcare officials, politicians and activists have also weighed in with their views on the easing up of restrictions.

With 30.1% unemployment countywide and many business owners facing mounting bills for rent and insurance, the opening comes as welcome relief -- even though concerns remain over how to turn a profit with fewer tables--and whether or not consumers will return.

ECM checked out social media posts and found a mixture of opinions among local residents in and around La Mesa, home to East County's restaurant row.

“I’m ready to support our local restaurants and retail stores. We will be there for sure!!” Marlette Seward posted on the Mt. Helix Next Door forum.

Chris Ghio wrote that during the early stages of the pandemic, residents were asked to do their civic duty to stay home and flatten the COVID-19 growth curve. “Now that government and health officials have said we can reopen businesses, don’t we also have a civic responsibility to go out—safely—and begin spending money/patronizing local businesses (as we can afford to)?” he asked. “Remember—they closed to help us #flattenthecurve and are now hurting. They helped us, we should help them!”

Jane Brill posted, “We plan on eating out to support our restaurants and just in time for our Anniversary! I choose not to live in fear. I respect those that say it is too soon and if youa re one of them, then you can make that choice to stay home. The economy has gotten so bad and needs to open now before any more businesses go under. 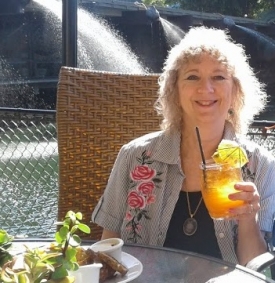 Several voiced desire to visit specific favorite La Mesa eateries including Casa de Pico, Swami’s and Anthony’s Fish Grotto. The latter had announced closure just a week ago, but rehired workers after an outpouring of community support and plans to reopening its outdoor lake-side seating early this week.  (Photo, right: ECM editor Miriam Raftery at Anthony's, prior to the pandemic.)

But others said they don’t feel ready to venture out for dine-in service yet.

Robert Juengst made clear he’s staying home. “No way in hell. Let someone else be the guinea pig,” he posted on Next Door.  “I’ve got medical issues and kids. Yes all of us are chomping at the bit but everything points to a second wave. That’s one wave I am not going to be riding.”

Kris Elig of Mt. Helix stated, “I will stick with take out for a long time into the future.”

“I’m excited to get back to work at my restaurant, but I won’t be going out for sit-in dining until tests are ready,” one La Mesa-area resident posted.

Candis Kolb says the “100% will NOT be eating out. Curbside has been great. I hope my favorite restaurants (a shout out to Terra) will continue this as a regular part of their service.”

Two of the largest healthcare organizations serving East County have indicated that they were not provided adequate notice – and both voiced concerns.  Sharp HealthCare and Scripps Health are handling about 60 percent of the presumed COVID-19 cases.

Chris Van Gorder, CEO of Scripps Health, told KPBS that Scripps didn’t receive the county’s proposed 180-page plan for reopening businesses including restaurants and retailers until the morning of Tuesday’s vote, without adequate time for input.  “There are elements ins the triggers that we have deep concerns about,” Van Gorder said, noting that Scripps recently had to transfer 56 patients from Chula Vista to other hospitals in the county, as well as receiving a recent influx of patients from Imperial County.

One trigger that could renew restrictions is if hospitals reach 80% capacity, but that doesn’t count intensive care unit beds nor negative pressure isolation rooms.  If those filled due to COVID-19 patients, Van Gorder warns,”We’d be in deep trouble long before we ever filled all 80% of our beds…”

Two other healthcare systems, UC San Diego and Palomar, both supported the plan after meeting with county officials, but those are not the systems most impacted by COVID-19 patients.

On Facebook, Ellis wrote concluded, “I don’t trust any decision made about a 187-page report with so little time allowed to review it. In fact, I think it may be debatable whether that report had the there business days notice as required for publicly conducted business under the Brown Act,” referring to California’s open government law.

In the wake of a spike in infections among Hispanic residents, many of whom work in essential businesses, Latina community leader Estela De Los Rios of El Cajon posted on Facebook, “I’m so upset that white privileged supervisors and mayor did what they wanted. We are not ready for phase 2…Human lives are being sacrificed for our economy.”

But State Senator Brian Jones (R-Santee) takes the opposite viewpoint, advocating for the state to allow even more businesses to open back up.

“It’s past time to set aside the ever-changing conflicting models, the politically motivated predictions and instead get back to health and safety trough personal responsibility and common sense,” Jones concludes in a video commentary sent to media and constituents.

I go to Kojack's at Mission Beach. It's a small family owned restaurant and I doubt the place will survive being closed. They serve mostly Greek foods along with hot dogs and burgers for the tourists.