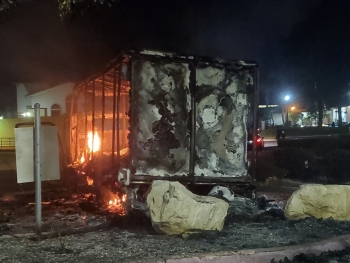 Update May 31, 2020: 1:15 a.m.  A curfew has been issued  by the City Manager starting at 1:30 a.m.. Shortly before midnight, Union Bank and Chase Bank in downtown La Mesa burned. The Randall Lamb historic building is on fire. More stores have been looted, including Walmart and Target at Grossmont Center and shops in  La Mesa Springs shopping center. 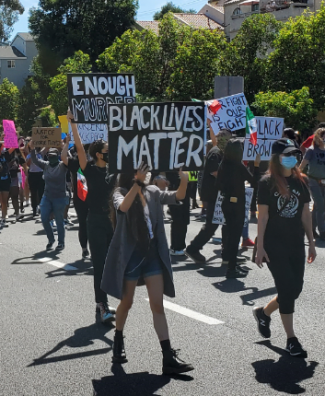 May 30, 2020 (La Mesa) -- Multiple vehicles at La Mesa's Civic Center are in flames tonight, with looting of businesses across the downtown area.The chaos comes after several thousand  mostly peaceful demonstrators converged outside the La Mesa Police Department headquarters this afternoon to protest the killing of George Floyd, an African-American man killed by a white police officer in Minneapolis. The protesters also demonstrated over an incident earlier this week in La Mesa when a man was detained near the Grossmont Transit Center that some contend was racial profiling.

In that incident, suspect Amaurie Johnson was arrested on suspicion of assaulting a police officer. Video on social media shows the Amaurie and the officer arguing when the officer pushes Johnson into a seated position. The officer has been placed on administrative leave pending an investigation. The city has also announced plans for an independent investigation.

The protest  later resulted in confrontations, tear-gassing of some protesters and declaration of an unlawful assembly.

Starting at 2 p.m., protesters loudly chanted “black lives matter,” “no justice, no peace, no racist police,” and “I can’t breathe.” Carrying signs with similar messages, the protestors peacefully took over the parking lot and walked up to the front doors of the police station. 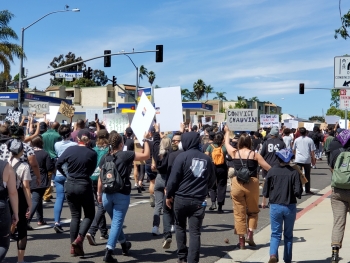 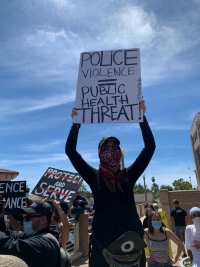 Casey Short says he organized the protest because he has mutual friends with Johnson. “We were sick and tired of seeing all the injustices that have been going around and it seems like it’s happening every day, just to a different name,” he told ECM. “We want people to stand up and fight for injustice no matter what color you are.”

He adds that with social media, things have changed. ”Younger generations understand that racism is no longer here to stay.” The Racial Justice Coalition, which held an early protest event in San Diego, joined Short and others, including La Mesa residents, at the LMPD protest.

Short and other event leaders knocked on the door of the police station, but no one answered. There were no police officers in sight at the station, nor during the first portion of a subsequent march. Firefighters stood outside, smiling and filming protestors.

“I’m here because of my community,” said Becky Frost, one of the protestors.  “I can’t be silent anymore. I’m a white privileged retired person speaking out against police brutality. There is too much white silence,” she said. “Everybody’s life matter. But everybody’s life is not on the line and not being threatened with racism.”

George, an Asian male in his early twenties who didn’t want to reveal his last name, said, “I’m here about justice in America. And no change coming about for decades.” 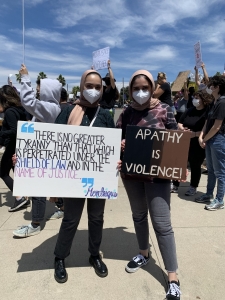 “We’re here about black lives,” said Denise, an African-American woman who didn’t want to reveal her last name. “This senseless silence has been happening for a long time. We probably should have been protesting a long time ago. Long ago.”

Sarah and Miriam Kadous also showed up in solidarity. (Photo, right, by Briana Gomez) “We are allies and even though we are also members of a minority community, the black community has had it worse,” Sarah Kadous said.

Heather Melone said she was inspired to come after seeing a sign that read “White silence is violence.”

Melone said she does not condone violence by anyone, protestors included. But she believes it is time for everyone to speak out against injustice. A mother of young children, she noted, “If I don’t teach them that we need to stand up and take action, what hope is there?”

After leaving the police station, protestors began walking down both the westbound and eastbound lanes of University Avenue, briefly blocking the busy thoroughfare. Some motorists in halted vehicles held up fist or signs in solidarity; others stopped to film protestors.

Some demonstrators chanted “George Floyd” but others shouted “Fuck the police,” a reference to a 1988 rap son released to protest brutality and racial profiling in Los Angeles. 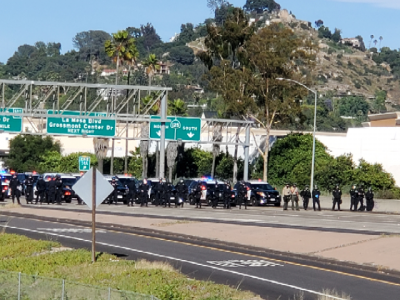 he crowd continued past the Riviera restaurant before turning back toward Baltimore Drive. The protesters blocked the Center Street freeway exit.  At first, the group was stopped when they tried to get on I-8 at the Baltimore Drive entrance by California Highway Patrol officers, but shortly thereafter, several thousand protesters broke through the CHP line and continued marching eastbound on the freeway.

The CHP then halted traffic on I-8 eastbound. (Photo, left, by Paul Kruze) When protesters began marching on the westbound side traffic was stopped on that side of the freeway. Traffic backed up on I-8 west as far back as the Main Street exit in El Cajon. Protesters also stood blocking the I-8 east exit, forcing traffic leaving La Mesa to reroute.

About 4:30 p.m., CHP officers wearing face shields stood in a line across the freeway at State Route 125 near Grossmont Center, where they squared off with protesters. The protesters retreated when a protester with a bullhorn appeared to be asking the crowd to back away from the officers. The protesters then left one side of the freeway and climbed over the center divider to get on the other side.

After an incendiary device with billowing white smoke was detonated, some 30 minutes later, the crowd of protestors began slowly moving back towards Baltimore Drive. The line of CHP vehicles, some spray painted with t 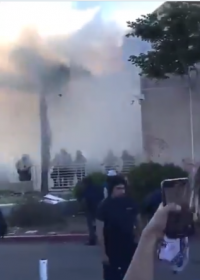 By late afternoon, protestors returned to the La Mesa Police headquarters, where they hurled rocks and bottles and other projectiles at the building breaking windows. The building was also spray painted with racist words.

The La Mesa SWAT team tactical Bearcat was also attacked by protestors, who threw rocks at the vehicle.

A police helicopter ordered the crowd to disperse and announced that anyone who did not leave would be arrested.

By 8:41 p.m., ECM news partner 10 News reported that a fire truck is burning, looting has been reported, and police have fired beanbags and rubber bullets, reportedly striking at least one protester. 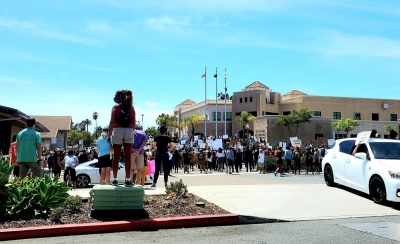 The local protest follows nationwide protests since Memorial Day, when Minneapolis police officer Derek Chauvin was videotaped pinning George Floyd to the ground with his knee on Floyd’s neck for over eight minutes, despite Floyd repeatedly gasping “I can’t breathe.” Floyd was suspected of passing a counterfeit check at a store.

The outrage over Floyd's death has grown across the country, and protests in some cities have turned into rioting.

Officer Chauvin was arrested and charged with third-degree murder and manslaughter on Friday. He and three other officers present have been fired, but thus far the other three officers have not been charged with any crime.

rience in print, broadcast and web platforms. A tenacious investigative journalist, he has  covered a variety of subjects, particularly governmental and educational issues.

The La Mesa Von's was looted and if now burning.