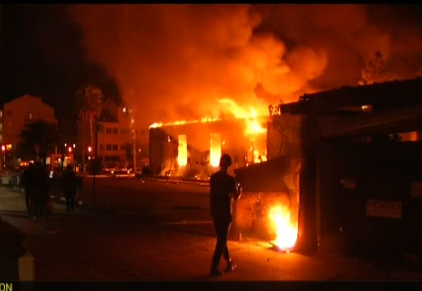 The violence escalated after an afternoon of protests against the killing of George Floyd by a Minnesota police officer, as well as against La Mesa Police over an incident adjacent to the Grossmont transit center in which an LMPD officer pushed a suspect into a seated position. The officer has been placed on leave pending investigation. The protests began with a peaceful 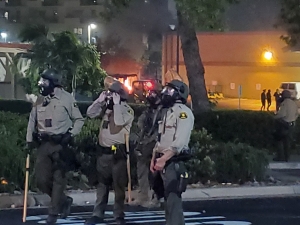 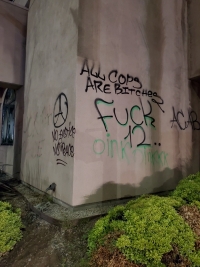 rally and march, with protestors later blocking freeway traffic a breaching a line of CHP vehicles.

Serious trouble began in the early evening when protestors, many clad in black clothing and black face masks, started throwing rocks and bottles and other projectiles at the La Mesa Police Department headquarters on University Avenue downtown. It is unclear whether these were the same demonstrators present during an earlier peaceful march, though some residents reporting witnessing vehicles coming in late in the day with occupants clad in black clothing and dark masks.  Numerous windows were broken and the building was spray painted with graffiti. (photos left and right by Paul Kruze: graffiti on LMPD station, officers during siege)

Members of the La Mesa Police Department alongside deputies from the San Diego County Sheriff’s Department guarded the building, along with others in the La Mesa city center area wearing helmets and holding night sticks. Demonstrators hurled rocks at the department’s Bearcat vehicle, after which police began lobbing tear gas canisters and rubber bullets to disperse crowds, with little effect. These methods were used at multiple locations as the mob spread out through La Mesa, wreaking havoc.

A protestor, Ariana Plascencia of Lemon Grove, told ECM reporter Rebecca Willamson, who was present at the fracas, “I put my hands up because violence put us here in the first place.  I got gassed. I want justice for innocent people. This needs to stop!” 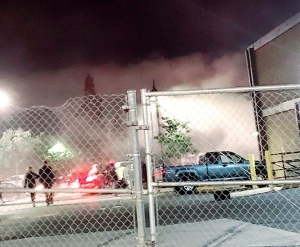 got my milk from the parking lot where people united. When they started throwing gas I saw the milk on the floor, and it burned so bad, I had to pour it on myself.”

While the law enforcements officers fought to keep protestors at bay near the civic center, the La Mesa Springs shopping center at the 8000 block of La Mesa Blvd. got the full brunt of the protestors. Many of the small businesses in the center closed early in anticipation of violence erupting, including a sports equipment store, nail salon, and yogurt shop. Trouble started at 9 p.m. after the VONS store closed. The rioters stormed the store, looting it of beer and wine. They also set on fire a VONS fo 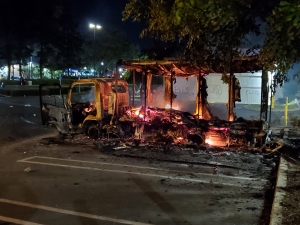 od delivery truck parked in back of the store.

In the choking and eye-burning fog of choking tear canisters being expelled, East County Magazine witnessed an army of law enforcement officers entering the store scouring the grocery store to clear out rioters.

As the evening wore on, rioters burned an U.S. flag atop of flagpole in front of the American Legion post.

After 10 p.m., La Mesa Police rushed to the Walmart store at Grossmont Center, where looters overcame a makeshift barricade of large stacked pallets filled with water bottles and broke into the store. There, they ran in and out of the store stealing television sets and other electronic equipment before the police could stop them. ECM also observed rioters gathering in front of the Target store at the other end of the store. 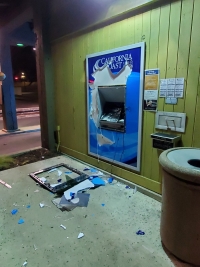 The worst damage and violence came later, where the rioters set fire to the Chase Bank and Union Bank buildings on Spring Street, but firefighters did not initially respond to battle the blazes. The fire at the Chase Bank was reported at 11:17 p.m. When questioned by ECM, La Mesa City C 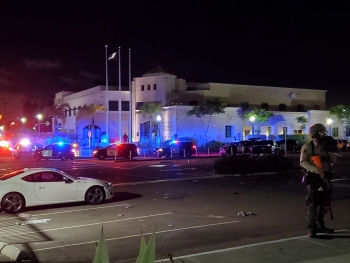 ouncilman Bill Baber said that the firefighters would not attempt to put out the fires because the law enforcement officers on the ground were not able to overcome the protestors to ensure their safety.

In addition to the Chase Bank and Union Bank on Spring Street being destroyed by fire, the offices of Randall Lamb, a consulting engineer business on the 4700 block of Palm Avenue, was torched by the rioters and the completely destroyed by fire. Footage shot by San Diego News Video around 3:30 a.m. showed the roof of the Randall Lamb building collapsing, flames shooting up towards the sky as sparks rained down close to nearby trees and structures, with no fire trucks or firefighters in sight during the freelance videographer’s extended early morning coverage.

As the night wore on, La Mesa residents posted frantic messages on social media, with no updates coming from besieged law enforcement agencies.  Sounds of incendiary device and exploses kept neighbors on edge.  On Next Door, some neighbors reported that armed residents chased off would-be looters outside the Sprouts market downtown; other posts indicated some business owners had resorted to guarding their own small businesses. ECM has no independent verification as yet of those incidents.

After being mainly absent from public view the entire day and evening as the commotion in his city unfolded, La Mesa Mayor Mark Ara 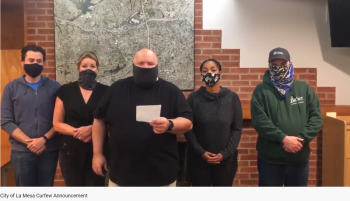 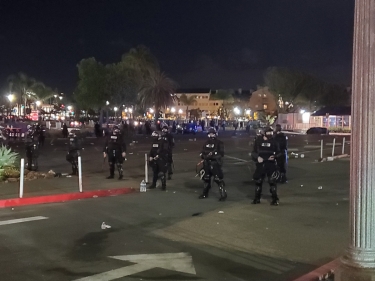 With La Mesa City Manager Greg Humora, and members of the City Council at his side, a visibly shaken Arapostathis haltingly read this statement from a torn piece of paper:

“Good morning, I’m Mayor Arapostathis. This morning, the City Council and I just concluded an emergency meeting. In light of ongoing events in the City of La Mesa, the entire city council is very upset and disheartened. We are utilizing all available resources and have reached out to the State for all additional aid to assist us in this emergency. We are committed to the safety and well-being of all of our citizens. As of 1:30 a.m. this morning, the City Manager is enacting a curfew that will last until 7 a.m. Please stay 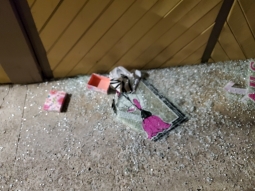 sheltered at home. And please stay safe. Thank you.”

Heartland Fire did respond to an  emergency call at a building in the 8100 block of Commercial Street identified as the headquarters of the City of La Mesa Public Works.

ECM has contacted media relations representatives for Chase Bank and Union Bank on whether temporary banking facilities will open for customers, or whether the banks will reopen those branches in the future at all.

The influx of thousands of protesters and later, rioters running wild amid the COVID-19 pandemic and stay-home orders raise concerns about potential spread of the infectious disease in La Mesa, as well as fears over what may happen if rioters return on subsequent nights, as has occurred in many cities across the nation following protests against police violence.

But in La Mesa, last night's violence targeted not only police, but also victimized many merchants already struggling to revive their livelihoods after months of shutdown and reduced revenues due to the pandemic, as well as residents looking on in horror as banks burned and the adjacent century-old historic village very nearly went up in flames.

East County Magazine gratefully acknowledges the Facebook Journalism Project for its COVID-19 Relief Fund grant to support our local news reporting including impacts on vulnerable communities during the COVID-19 pandemic.

I am working in La Mesa right now, and there were piles of rocks stacked next to spring street. Apparently, someone was organizing the violence. It also seems, but I do not have a direct account, that milk was made available in the parking lots to mitigate tear gas. Similar incidents of pallets on brinks being brought to protest have been reported. If you are a news organization, track down who was distributing and organizing the rocks. That is the real story. Also, everyone hates banks... bitcoin is an alternative to this broken, fear based system. Bitcoin is trust not fear.

While it's no crime to bring milk in case one is tear gassed (I've advised our own reporters to consider carrying it, since you can suffer the effects even if you're doing nothing wrong but merely near others who are targeted), bringing rocks clearly shows an intent to harm or vandalize others.  If anyone has photos or videos of those who brought rocks, or an eyewitness description,  I would like to see them and also witnesses shoudl notify La Mesa Police

We clearly said rioters caused the damage.  We do not know who these people are who caused the damage, but from what we've seen it appears to be primarily outside groups that came in with the premeditated intent to cause harm since they had incendiary devices, came in carloads dressed in black, etc.  Whether these are anarchists, antifa, or urban gangs, we don't know. It's possible some protesters stayed and joined in with violence actions, but many, probably most of the looters shown on video were white, not black.  We have used the term protesters for the peaceful demonstrations and rioters or looters for those who engaged in criminal actions later in the day. The only thing I'm aware of that can be tied to protesters that was illegal was some did throw rocks and bottles at officers.

You do raise good questions as to why there were not enough law enforcement and firefighters to protect much of La Mesa. We will be asking for public records of all mutual aid requested and the responses that the city and fire departments received.

Your article states that "protesters" are responsible for the fires, looting and damage. Are you sure it was the original protesters? I could be that the majority of people looting and causing damage are coming in behind the protesters and may not be all "radical democratic protesters" as media, Trump and others state. The later group group seems to be younger and dresses differently that those who showed up earlier for the protest. It seems like there are groups of people who follow protesters and take advantage of the disruption. Great also how the La Mesa Police made a stand to protect their building while surrounding businesses were left unprotected to be looted and burned. Great law enforcement planning. Where was all the other well funded cooperative enforcement that should have been planned for in such an situation? Someone should ask that question of the Police Chief, but after all, vagrant taught a lesson, the Police Station stands, and mission accomplished!