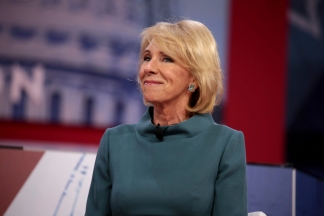 The judge issued a preliminary injunction barring U.S. Education Secretary Betsy DeVos and her department from enforcing its rules barring many students from being able to receive a share of the $580 million California’s community colleges received through the federal CARES Act for pandemic relief. The community colleges argued that denying the money to students left those students without needed financial support to cover rent, pay for food, or afford school supplies during a global health pandemic and economic catastrophe.

Judge Yvonne Gonzalez Rogers’ ruling applies only to California’s community college students, including undocumented Americans, DACA recipients, and hundreds of thousands of other students who were initially deemed ineligible by the Trump administration.

The U.S. Department of Education will appeal, said spokesperson Angela Morabito. Depending on the steps the department takes, the case could advance to a higher court, the Ninth Circuit Court of Appeals. The department could also ask a higher court to overrule Rogers’ preliminary ruling while the case proceeds.

The question of whether undocumented students are eligible for CARES Act money has divided courts: Last week a federal judge in Washington state issued a preliminary injunction against the department’s eligibility restrictions, but wrote that the ruling doesn’t apply to undocumented students.

At issue is whether Congress intended to restrict the more than $6 billion in CARES Act emergency aid to only students who are eligible for federal financial aid. That’s the interpretation the U.S. Education Department took, which is why more than half of the 1.5 million students enrolled in California’s community colleges were ultimately left out of receiving the emergency aid. The legal team for California Community Colleges argued that Congress never specified who is eligible for the emergency grant aid.

“Nowhere does (The CARES Act) mention or otherwise incorporate restrictions on the types of students eligible for aid,” Rogers wrote. She also disputed the department’s interpretation of who is a student. The Department “manufactured ambiguity where none exists by imposing their own restrictions on the definition of ‘student,’” the judge wrote.

In a statement, California Community Colleges Chancellor Eloy Ortiz Oakley said he “applauds” the judge’s decision. “Among those who have been harmed by the guidance issued by the Department of Education are veterans, citizens who have not completed a federal financial aid application, and non-citizens, including undocumented students and those with DACA status,” he said.

After Congress passed the CARES act in March, the Trump administration initially said all students were eligible for emergency aid, the suit filed by the California Community Colleges said. But on April 21 it issued guidance to colleges on how to use the emergency aid for students, limiting the money to students eligible for federal financial aid. That excluded undocumented students, those who never earned a high school diploma or equivalent, students who defaulted on student loans or had certain drug convictions, among other disqualifications.

On May 21, 10 days after the community colleges sued Devos, the Trump administration made a partial about-face, permitting most legal residents to access the emergency aid. But in June the Department reverted back to its original stance with more formal regulatory language, restricting the CARES Act funds to only students who could receive federal financial aid.

In that time, community colleges in California doled out large chunks of their aid to students by following the initial restrictions, leaving out undocumented and other students. As of June 10, Mt. San Jacinto College disbursed $3.4 million of its $4.85 million in federal emergency aid funds. Similarly, Pasadena City College distributed $4 million of its $7.6 million in emergency aid by May 21, following the Department’s rules.

Kevin Herrera, a staff attorney with the National Immigration Law Center, a group that supported the suit by the community colleges, said the restrictions had an “outsized impact” on low-income, immigrant communities. “We were concerned about their well being in the midst of an emergency.”

'We’re going to win so much, you’re going to be so sick and tired of winning' - President Donald Trump