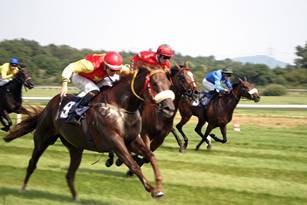 Over 2,000 racehorses die in the U.S. every year, often after suffering drugging, abuse and injuries. Horse racing has long had ties to organized crime. So why is it still legal?

July 9, 2020 (San Diego) -- People are rightly outraged by brutal dogfighting, on which spectators gamble.  The media’s coverage of dogfighting is dominated by images of Black and Latino men fighting dogs for bets, and there is a pattern of demonization:

“Dickey suggests that the creation of the 24-hours news cycle, inaugurated by CNN in 1980, represented a turning point. The rise of cable television created a salacious interest in ‘ghetto’ and ‘thug’ stories, and the news networks loved to report on the viciousness of urban ‘animals’ both canine and human. A July 1987 Sports Illustrated story about pit bulls featured a cover illustration of the dog snarling, open-mouthed, with fangs on full display. The title in large print and all caps: ‘BEWARE OF THIS DOG.’ During this time, at the height of the Drug War, the media similarly stigmatized Latino and Black men. They were treated as toxic carriers of drug addiction and social dysfunction, much as rats and other animals have been cast as sources of disease.

“The link made between savage beasts or dangerous animals and black humans is as old as the history of enslavement. As the actor Michael B. Jordan memorably phrased it: ‘Black males, we are America’s pit bull. We’re labeled vicious, inhumane, and left to die on the street.’ (Jordan made the comment in a promotional interview for the film Fruitvale Station, in which he played Oscar Grant. Grant was an Oakland resident fatally shot by transit police, in a killing that anti-police brutality activists have described as an execution, and proof that black lives in America are treated as expendable.)”

I bring this up to contrast the treatment of the mostly white, wealthy owners and trainers of racehorses brutally used up every day for gambling.  Why the difference?  Horses are beloved like dogs.  They are bred for this brutal industry, subjected to torture devices to control them — tongues being tied down, blinkers to narrow vision, confined for 23 hours most days, whipped for greater speed.  Add the drugs to mask pain and/or enable heightened speed.  Bones and joints splinter and shatter under the pounding.  Resistance by some horses results in horrific collisions with other horses, railings and gates.

Over 2,000 racehorses die in the U.S. every year based on death reports compiled from regulatory bodies, plus USA Today reported last Fall that at least 7,500 US racehorses are sent each year to slaughterhouses in Canada and Mexico to be butchered for human and pet food.

Horse racing is well-known as a sordid industry with close ties to organized crime which go far back and continue to the present day.

Horse racing shows its lawlessness currently.  In March, a grand jury in the Southern District of New York indicted 27 individuals in what federal prosecutors called a “widespread scheme to illegally dope racehorses.”  The most prominent indicted is Jason Servis, famed trainer of Maximum Security, who crossed the finish line first at the 2019 Kentucky Derby but was disqualified for obstruction.

The scheme involved drugging horses in “an effort to increase their performance beyond their natural abilities” in races across the country, according to the FBI’s Bill Sweeney.  Among the indicted include trainers, veterinarians and drug distributors.

The animals often suffered, including distress, injuries and even death.

“It amounted to nothing short of abuse,” Sweeney of the FBI said, noting that the humans meanwhile “lined their pockets” while manipulating the sport.

This doping scandal is widely acknowledged to be the tip of the iceberg in this industry which has run on doping — animal abuse AND cheating — since its beginnings.

News broke early this week that famed California-based Racehorse Trainer Bob Baffert had two of his leading horses test positive in a second test to confirm illegal drugs.  In his defense, Baffert threw an employee under the bus.

How much more evidence do we need to finally outlaw Horse Racing as the brutal animal abuse for crooked gambling that it is, as we have dogfighting and cockfighting?

If California legislators decide to put an amendment to our Constitution to allow Sports Betting before the voters, this is a great opportunity to also repeal betting on Live Horse Races approved by voters in 1933.  In the 21st Century, bet on consenting humans, not animals with no say.

Thanks for sharing this information. I really like your blog post very much. You have really shared a informative and interesting blog post with people.periodic table

Reminder: Unlike cockfighting and dogfighting the object of a horse race is not the death of one of the animls.

As far as trying to conflate the 24 hour news cycle, crime and racism with horse racing.....Are you sure you want to leave out child molestation, drunk driving and the prescription drug epidemic? There must be a connection somewhere.