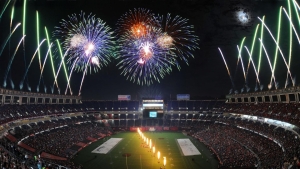 August 7, 2020 (San Diego) - The San Diego State athletic department and iHeartMedia announced today that the annual KGB Sky Show will not be held in conjunction with an Aztec football game during the 2020 campaign.

As one of the most anticipated events in San Diego for many years, the KGB Sky Show has attracted large crowds to SDCCU Stadium on an annual basis to experience an unparalleled pyrotechnic display synchronized to an audio soundtrack created by the radio station 101.5 KGB-FM.

Earlier this week, however, the Mountain West Conference announced that the start of the 2020 football season would be delayed by three weeks. In addition, SDSU’s schedule, including opponents and home dates, may potentially change. Due to the uncertainty of the Aztecs’ home schedule, it was determined after much discussion and deliberation that an event of this magnitude could not be organized in the remaining timeline.

“We appreciate the relationship we have with iHeart radio and the annual KGB SkyShow postgame event is something all Aztec fans look forward to,” Steve Schnall said. “Unfortunately, from a logistical standpoint we are unable to have enough advance time to put an event of this magnitude together. We look forward to being able to coordinate with iHeart in the future to bring this event to San Diego.”

With the new timeline announced by the MW, San Diego State will kick off its season no earlier than the weekend of Sept. 26. The Aztecs will play eight conference games with the option to play two non-conference opponents. Depending on the need to potentially reschedule regular-season games, the 2020 Mountain West Football Championship game will be played on either Dec. 5, Dec. 12 or Dec. 19. Various scheduling models for the 2020 MW football season are under consideration and will be announced upon completion.

Have the fireworks been bought?  Launch them from a barge in the bay or off shore.