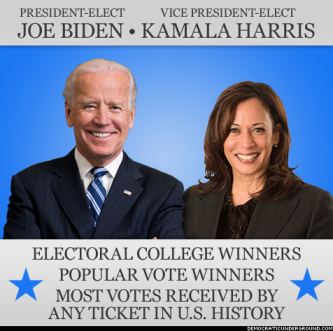 Several court challenges filed by the Trump campaign have already been dismissed.  The President  falsely claiming he won the election “by a lot” despite vote counts showing exactly the opposite. He suggested electoral fraud but did not provide any evidence, seemingly detached from reality much as he has with repeated claims that the coronavirus pandemic has “turned the corner” despite record numbers of cases in recent days. Even Fox news, the normally staunchly conservative station, reports, “Trump, his campaign and surrogates have spread allegations of fraud in the voting and ballot counting in various states, although solid proof of it has not emerged.”

The George vote does appear to be close enough to trigger a recount, but even if Trump were to flip the state, Biden still has more than enough electoral college votes to win the White House.

Former Republican presidential nomineer Mitch Romney and former Florida Governor Jeb Bush, also a past presidential contender, were among the prominent Republicans who issued congratulations to Biden. Many foreign leaders also sent congratulatory messages.  Biden's victory was also celebrated in London with fireworks and in Paris with church bells ringing.  Many Europeans hope a Biden victory will help restore tattered international relations with the U.S.

Biden has pledged to make it a high priority to address the coronavirus pandemic and has already assembled a task force of medical experts with whom he has been meeting. He has also indicated he will rejoin the Paris Climate Accord on day one and aims to heal racial relations by addressing systemic racism in America. His win reflects in part a repudiation by most voters against Trump's demeaning remarks targeting Latinos, Blacks, Muslims, women, members of the military and even the late Arizona Senator John McCain, a former prisoner of war.

Some of Biden's other goals, however, such as healthcare reforms, a pandemic relief bill and rollling back tax cuts for the wealthy may be stymied by Republicans retaining control of the Senate, where Senate leader Mitch McConnell has consistently obstructed everything from President Barack Obama’s Supreme Court nominee to virtually all legislation introduced by House Democrats.  Two special elections for Senate seats in Georgia in January, however, provide a chance for Democrats to tie the Senate in party affiliation, with Vice President Harris potentially casting the deciding vote. 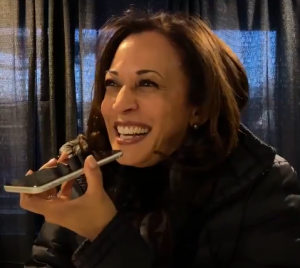 The historic victory elevates Harris as the first woman vice president, as well as the first woman of color to serve as a vice president.  Her win also gives California representation in the White House, a position that could aid in efforts to have the state’s priorities addressed at the national level.  (Photo, right: Kamala Harris chats with a vote during election week, via her Twitter feed)

It also opens up Harris’ Senate seat, which will be filled by appointment by Governor Gavin Newsom.  Numerous names have been floated, among them Toni Atkins, which could give San Diego added influence in the Senate.

In the streets around the White House and in cities across the nation, massive celebrations broke out upon news of Biden’s win.  A brass band on a truck played jazz throughout the capitol’s streets, as the crowd swelled into a march drawing hundreds, the Washington Post reported. 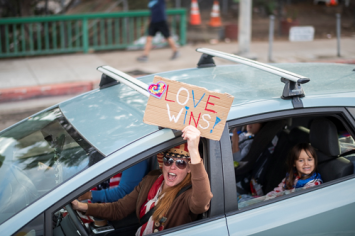 In San DIego, local leaders and community members posted diverse reactions to the news of a Biden-Harris victory.

“People are honking and whooping in the streets here in North Park, San Diego,”  labor leader Brian Polejes.posted on Facebook.

San Diego Republican Party chairman Tony Krvaric tweeted after the news, “Accountability post. The choice was to either riot or go for a brisk walk. I chose wisely because I am not a Marxist. Bck to under an hour.  67 calories burned. Now I will rewad myself with some Phở.. Yum.”

Will Rodriguez-Kennedy, San Diego’s Democratic Party chairman, voiced jubilation on his Facebook page.  “We won! @Joe Biden is the president elect!” he wrote, also posting a link to a Youtube video: “Victory Celebration – Return of the Jedi.”

Julian resident Pat Landis wrote on Facebook, “My hope is that we can all at least try, give it a shot, to unite.”

In his latest statement, President-Elect Biden voiced a similar sentiment, adding that he is “honored and humbled” to be the next U.S. president.  “It’s time for America to unite and to heal,” he continued. We are the United States of America. And there’s nothing we can’t do, if we do it together.”

A return to sanity. A time to heal.