Editor's note: I was driving home on I-15 the night Cara Knott was killed, passing the isolated exit at nearly the exact time she was murdered.  If Peyer were innocent, why would he refuse a DNA test that could exonerate him?  I find it chilling that a law enforcement officer who so violated the public trust could be set free.  Please post your comments below.

December 8, 2011 (San Diego’s East County)—Craig Peyer, the California Highway Patrol officer convicted in the 1986 strangling murder of 20-year-old motorist Cara Knott, is eligible for parole. The family of Knott, a student at San Diego State University when she was brutally murdered by Peyer, seeks public help to prevent him from being freed.

Knott was driving south on Interstate 15 on December 27, 1986 to her parents' home in El Cajon. Peyer, on duty in a marked CHP patrol car, signaled Knott to pull off the freeway on an isolated off ramp. The officer had been harassing a number of women drivers in the same area, pulling them over on the same isolated off ramp and apparently trying to pick them up as dates.

It is believed that the situation with Knott escalated to physicality when she threatened to report Peyer for unprofessional behavior. Peyer bludgeoned her with his flashlight and strangled her with rope. He then threw her body off an abandoned bridge into the brush below. 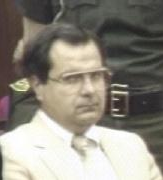 Two days later, while covering the investigation of the murder, a reporter for a TV station, interviewed Peyer during a ride-along segment about self-protection for female drivers. Peyer had scratches on his face which, as details of the case unfolded, were believed to have been inflicted by Knott during her struggle with the officer. He tried to explain them away by saying he fell against a fence on the CHP parking lot, but the fence was found to be too high to be consistent with Peyer's facial scratches.

Just after the television broadcast, nearly two-dozen telephone calls, mostly from women, were received by authorities. Callers reporting that Peyer had pulled them over on the same off-ramp. There had been complaints about him prior to the murder by several women, but those were dismissed due to his reputation within the department.

A rope found in his patrol car matched the rope marks around the victim's neck. Gold fibers found on Knott's dress matched the gold braid on Peyer's CHP uniform shoulder patch Furthermore, a drop of blood was found on one of Knott's boots which was found to be consistent with Peyer's blood type (AB negative, the rarest type) and other genetic markers, although conclusive DNA testing was not available at the time of the investigation.

Peyer's fellow police officers, including one female San Diego police officer, testified to the defendant's strange behavior following the murder, with his continuous requests regarding the investigation's status and his attempts to justify the perpetrator's crime as a mistake. An internal investigation showed that while he stopped many drivers for various legitimate violations, most were females driving alone. Moreover, they were of the same age group and physical description of Cara Knott.

The first trial resulted in a hung jury. Upon retrial, testimony regarding a potential second suspect and a hearsay explanation for the defendant's scratches was ruled inadmissible, and Peyer was found guilty of murder, the first-ever conviction of murder by an on duty CHP officer. In 1988, Peyer was sentenced to 25 years to life.

After conviction, Peyer continued to claim his innocence. In 2004, Peyer was asked if he would contribute a sample of his DNA to a San Diego County program that was designed and initiated to use DNA samples to possibly exonerate wrongfully imprisoned persons, since at the time of his trial and conviction such testing was not yet available. Peyer refused to provide any DNA for the test. When asked at a subsequent parole hearing why he had refused to provide a sample, Peyer remained silent.

Peyer was denied parole in both 2004 and 2008, and will receive another parole hearing which is scheduled for January 11, 2012, at the Men's Colony at San Luis Obispo. For those opposed to parole for Peyer, letters can be written to the San Diego County District Attorney's Office or Parole Board.

Cara's uncle, Phil Knott, was my H.S. German teacher for 4 years. Mr. Knott organized annual month-long H. S. bicycle trips to Europe (I went on two). Craig Peter wrecked havoc on this family and should remain in prison. Andrew Cliffe
I have heard that this man has been classified as a non-violent criminal and is currently eligible for early release due to COVID risks in the prison where he is incarcerated. Could someone please confirm or deny this horrible claim? Thanks!

I was driving the same route where he killed Cara Knott just a half hour earlier that evening.  It could easily have happened to me and her murder really shook me up.  I was coming home from a night job in Escondido.

I searched online and found news articles from last August saying he might be eligible for early parole and that the Knott family was asking people to write the Governor and urge that this not happen.  I couldn't find any updates.

I went to school with Cara. She was a very nice girl. Always had a smile on her face. She was beautiful and smart. I hope peyer dies a horrible death and rots in hell.