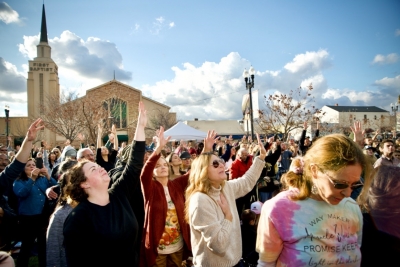 Updated 9:30 p.m. with clarification from El Cajon Police that a counterprotester who alleged assault did later file a police report.

January 29, 2021 (El Cajon) – The County’s public health officer and many local residents are speaking out critically of El Cajon’s leadership after Mayor Bill Wells gave the opening prayer at a religious gathering January 17th that drew hundreds of outdoor worshippers at Prescott Promenade, nearly all without masks.

The “Let Us Worship” Christian service and concert was organized by evangelical musician Sean Feucht, who exhorted the crowd to yell as loudly as they could despite medical evidence that singing and shouting at worship services has led to super-spreader events and deaths elsewhere. He also invited people to come onstage for a “born again” ritual in which they were prayed over and hugged by faith leaders.

The event was in direct violation of the state and county COVID-19 regulations, held at a time when regional ICU capacity is zero and a stay-home order was in place due to surging COVID cases, including new, rapidly spreading variants.

The city did not issue a permit for the event, however Mayor Wells has openly voiced support for defiance of regulations and has indicated he directed police not to enforce violations of health rules, such as businesses defying shut-down orders. Elsewhere, Feucht has dodged permit requirements in some cases, calling his events "worship protests."

El Cajon Police officers were present, but did nothing to shut down the event or even enforce masking regulations. The San Diego Union-Tribune reported that police did not respond when a counterproteser dressed as the grim reaper was attacked and had his megaphone smashed; the protester had reportedly shouted, “How many people have you killed due to no masks at your events, Sean?”

However, El Cajon Lieutenant Randy Soulard disputes the newspaper's account. "After the theft occurred the victim approached an El Cajon Police Officer, who was working alone on a perimeter of the event, when the victim came running up to him from inside the crowd. The officer did not witness the theft," Lt. Soulard stated in an e-mail."The victim was uncooperative with the officer and refused to identify himself. The victim did not explain what happened in order to begin a criminal investigation or obtain a suspect description, only pointing at the large crowd indicating the suspect was somewhere in the crowd. The officer continued to try and determine what had occurred and obtain the victim’s information for the reported crime when the victim walked away...The victim did not appear to be injured and did not complain of any injury." He indicated a witness claimed the victim was not assaulted.  According to Lt. Soulard, the victim later contacted another El Cajon police officer. He "ultimately identified himself and a crime report for the theft from his person was taken. The investigation into the theft is ongoing." ECPD asks anyone who witnessed the incident to call (619) 579-3311 or San Diego Crime Stoppers at (888) 580-8477 or visit SDCrimesteoppers.org.

The event was free, though Feucht cashed in by selling T-shirts reading "Jesus was a super-spreader" and calling on the crowd to give donations via their cell phones. 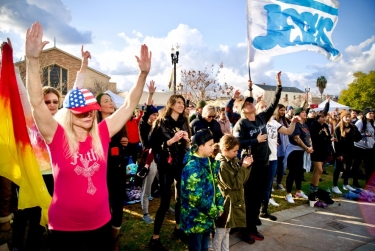 “There is an unfortunate irony that unsafe events only serve to increase the case count--and punishes businesses and those who have lost loved ones,” Dr. Wooten said, a reference to the fact that surges in cases lead to stricter and longer shutdowns.

Nathan Fletcher, Chair of the County Board of Supervisors, also voiced disapproval but indicated the County is limited in its enforcement capacity in incorporated cities. “We understand there are a lot of forces out there, including elected officials advocating open defiance,” Fletcher noted. He indicated that the county is investigating complaints and will issue cease and desist orders, in some cases public closure notices such as with businesses not complying, and follow up by law enforcement as needed.

Mayor Wells has defended his stance by stating he believes people need “hope” after months of quarantine, and as a mental health professional, he is concerned about the high rate of suicides, depression and other problems cause by isolation.

ECM emailed the other El Cajon City Council members to ask if any had concerns or planned to take action to compel enforcement of COVID-19 rules.  Three did not respond. A fourth, Gary Kendrick, said he is concerned, but does not have the votes from any of his colleagues to take action.

The public has mixed views on the matter.

Mike Nelson of San Diego, who attended the event with his wife, Collette, told the Union-Tribune they came after tracking Feucht’s movement  “seeing lives changed and people getting saved and getting healed…” They came, he said, because “I couldn’t miss it.” 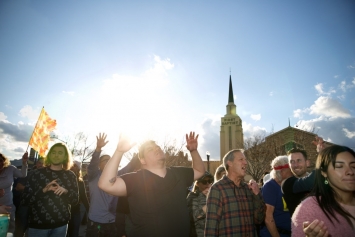 Donald Williams wrote, “The mayor is a shining example of why this pandemic especially in El Cajon will be uncontrolled until 2025!”

Linda Armacost said of those in attendance, “They may see God sooner than they expected.”

Several posted that they have stopped going to El Cajon to shop or take-out meals due to feeling unsafe because of the failure to enforce public health rules.

Stacie Hoover  praised San Diego’s new Mayor Todd Gloria, who just announced increased enforcement actions to assure compliance with COVID-19 rules.  “Too bad he’s not also mayor of El Cajon,” she wrote. “The   damn super spreader events they held out here are actually killing people. And the mayor and other elected officials attended them. This is why my kids can’t go to school,” said Hoover, a former candidate for the Cajon Valley School District board. She cited the high number of cases in the district – 540 since September 9, according to the CVUSD COVID-19 dashboard.

Jill Barto, a trustee on the CVUSD board,  attended the rally, not wearing a mask, and posted photos on her Facebook page.

Steve Robak, an elected member of the Lakeside Water District, scornfully dismissed concerns voiced by many over the lack of masks, likening those who wear masks to “sheep”  and taunting,“Baaaaahhhh. Do as you’re told.”

El Cajon has had 10,373 cases of COVID-19 since the pandemic began last March.  The city’s cases account for 4.8% of the county’s total cases. El Cajon also has the second highest case rate in the county with 9,826.7 cases per every 100,000 residents, according to the county's summary of cases by city, as of today.

In other words, nearly 1 in every 10 people in El Cajon is confirmed to have had COVID-19 – perhaps not surprising given the city’s abandonment of its responsibility to protect the public health amid the worst pandemic in over a century.

I wish Covid on nobody, not even idiots. There are signs the pandemic may be ending, but not in a good way. The danger we face is that Covid-19 becomes endemic. What would that mean? Annual Covid shot, probably around the time of the flu shot, forever. A deadly disease stalking humanity for generations just because idiots could not wear a face condom. If it creates too many mutations to stop with one vaccine, or perhaps a few boosters, then people behaving in this way will be responsible in part for having created a new grim reaper for all of humanity to suffer. I don't know what happened to Christianity, really. But it is ugly as hell in some sects, and maybe (in their theology, not mine) they have been tricked by the beast into worshiping the dark side. Feucht and Wells may actually be representatives of the nasty one. I don't think that way of course, I'm not with the superstitious. But it is what you would need to call the situation, for sure, if this irresponsible behavior Covid becomes an endemic to torture human kind. We will know who is responsible because they are putting their names on it! (Trump already wins some of it.) Let's hope science wins this one, because if this virus becomes endemic, well we don't know the full extent of the potential damage.
Here is hoping everyone gets covid 19. Especially Wells!