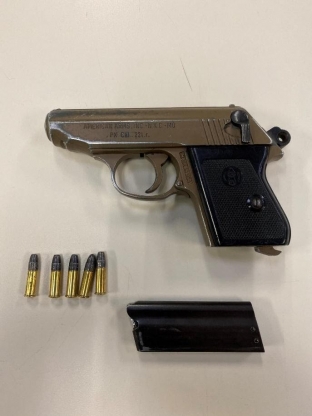 East County News Service
February 2, 2021 (Spring Valley) -- A search warrant was served at The Green Room in the 9000 Block of Olive Drive in Spring Valley on Sunday, January 31st around 9:00 a.m. as part of the Sheriff’s Department efforts to work with Supervisors to shut down illegal marijuana dispensaries in East County.

Deputies at the Rancho San Diego Sheriff's Station conducted an investigation in response to complaints from neighbors and businesses.  More than 400 pounds of marijuana and $3,500 in cash were seized.

Freddie Tyson, 34, was arrested for being a felon in possession of a firearm and ammunition.  In California, it is illegal for a convicted felon to be in possession of a firearm.
The County's Code Compliance Team will visit the site to ensure a complete shutdown of the facility.
The warrant follows community concerns about illegal marijuana dispensaries operating near schools and residential areas.
According to a Sheriff’s press release, “We want to assure those we serve the Sheriff's Department is listening to the community and recognizes the negative impact illegal marijuana dispensaries have on our neighborhoods.  These unregulated facilities attract criminals involved in other illicit drugs, and are often the catalyst for violent crime, property crime, and financial crime that affect residents and other local businesses.  Products sold at unlicensed facilities are cultivated and manufactured using processes which may be harmful to consumers and are often marketed to children, creating a public safety hazard.”
The County Board of Supervisors recently allocated $500,000 to help with enforcement of unlicensed marijuana dispensaries in unincorporated San Diego County, a proposal made by East County’s new Supervisor, Joel Anderson.

presumably to show that they seized a weapon from this particular dispensary.  Since we've used the same couple of generic images of marijuana on stories about dispensary raids in the past (unless we had an image of the actual place) I ran with this one.

I could not run out and take a photo myself today, since I took my Mom to get the COVID vaccine.

Why does an story about marijuana have, as its picture, a gun and bullets?. I know it's about illegal stores, but it seems to entwine marijuana with crime and violence. Maybe pictures of the illegal stores with a warning not to use them could have been more appropriate. Sorry to comment because I'm a fan of your writing. I just feel this inappropriate.