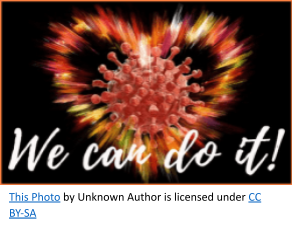 By Miriam Raftery
April 17, 2021 (San Diego) — The County of San Diego is well on its way to meeting its goal of vaccinating at least 75% of all residents age 16 and older. Nearly half (46.6%) of those eligible have received at least one vaccine so far, and 29.2% of those 16 and up have received at least one dose. Over 2.23 million doses have been administered to date.
That number will likely rise sharply, since starting April 15, everyone age 16 and up in California is now eligible to get vaccinated.  The Pfizer and Moderna vaccines currently in use locally have been nearly 100% effective at preventing death or serious cases of COVID-19 and between 90 and 95% effective at preventing contraction of the virus. Not a single death has been linked to either of these two vaccines, out of hundreds of  millions administered worldwide.
The County is currently in the state’s orange tier and if current trends continue, is unlikely to revert back into a more restrictive tier under new state rules, which only trigger moving to a more restrictive tier if there are low rates of vaccinations, significant increases in hospitalizations among vulnerable populations, and if both caser rates and testing positivity indicate a concerning increase in transmission.
“This is currently not the case in the region,” a press release from County Health and Human Services states.
Over the past week, the testing positivity percentage was 2.5%, placing the County in Tier 3 or the Orange Tier. Yesterday, the rate was 2%. The County’s health equity metric, which looks at the testing positivity for areas with the lowest healthy conditions, is 3.0% and is also in the Orange Tier or Tier 3. In the past week, 17 community outbreaks were confirmed. All of these metrics have dropped sharply in recent weeks despite reopening many businesses – a fact largely due to getting many people vaccinated.
The County reported 317 new cases on April 15.  Of all cases reported in our region, 5.5% have required hospitalization and 11.1% of those hospitalized had to be admitted to an intensive care unit.
The Calif. Dept. of Public Health assesses counties on a weekly basis. The next report is scheduled for Tuesday, April 20.

people would continue to wear the mask!