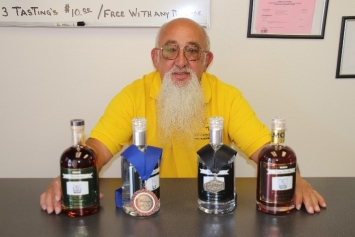 April 16, 2021 (Spring Valley) -- East County is known for many things: beautiful wide-open spaces, nature, horseback riding and hiking, makers of some of the best banjos and guitars in the world, numerous wineries, and more. But many people don’t realize that East County is also home to internationally-recognized, award-winning distilleries.

One such distinguished distillery is Mike Curphy Distillery, located with two other distilleries in the business park off Via Orange Way, near the San Miguel Fire Station, in Spring Valley. 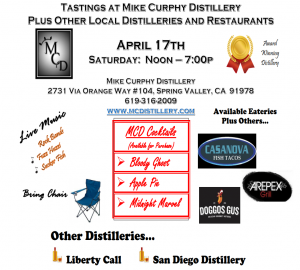 Mike Curphy and two other East County distilleries (Liberty Call and San Diego Distillery), along with four local eateries and three live bands, will be hosting a community party on Saturday, April 17, from 12:00 noon to 7:00 p.m. at the business park off 2731 Via Orange Way in Spring Valley.

There is no cost to attend the event; tastings, drinks and food will be available for purchase. Bring a chair to relax outdoors and savor tastes from the distillieries and local restaurants. (Also bring a mask, to comply with county health rules when not eating or drinking.)

In an exclusive interview with ECM,Mike Curphy shared secrets of his success and his extraordinary journey from moonshining to making award-winning spirits.

Q&A WITH MIKE CURPHY: FROM MOONSHINING TO LEGAL MANUFACTURING

Q: How did you get started making whiskey?

A: It’s a cute story, why and how I went legal. I used to be what they call a “moonshiner”.  I made illegal liquor. I was making a delivery. I was sitting at a stop light, with 20 gallons [of moonshine], in quart jars, in the trunk of my car, and got rear-ended. By a San Diego police officer. Scared the living bejesus out of me!

He didn’t hit me very hard, to do any damage to the car, but, it was the fact that I got rear-ended while I was doing a delivery.

Next thing I know, there are like 12 cops around me. They all came out to make fun of him for hitting me.

Long story short, they never asked to see in the trunk of my car, or anything, to make sure that the lid of the trunk opened and closed okay. So, we all went on our merry ways. They whole time I was standing there, with all those cops around me, I was praying to the good Lord Jesus, saying “If you get me through this without them asking me if the trunk of my car opens and closes okay, I’ll go legal.”

The next day, I started the process of going legal. I keep my word to the man upstairs. He knows who you are.

I don’t want him to look over his shoulder his whole life like I have.

Q: How long has that recipe been in your family?

A: The family recipe for the single-malt whiskey, as far as we can figure, has been in the family for 240 years. It started back in the Isle of Man, from where my great-great grandfather and his brother came to the United States to mine the iron-ore mines in the upper-peninsula of Michigan and Wisconsin.  They came here as indentured servants, and along with them, they brought the family recipe.

I’ve been the fortunate one out of all the grandsons, to learn how to make the family recipe. Now I’m making it legal so that we can let everybody enjoy what good quality single-malt, and good quality moonshine, really is.

A: Let’s start with the family recipe. It’s called “Uisge-Beatha”. That’s a single-malt whiskey. It’s made the tradition way, using malted barley, and, I bring in, from Scotland, the peat-smoked barley. It’s made the same way my family made it 240 years ago. 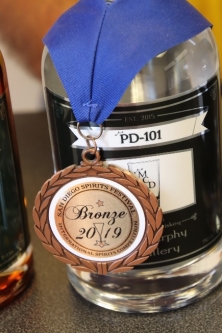 spiced rum. Spiced rum is a new product to me. I’ve always loved rum so I decided I’m going to make some spiced rum. I played around with the recipe for a couple of years until I found something I that I really enjoyed. Before I released it to the public, I actually sent it out to the Sunset Magazine Spirits competition, and ended up winning a Bronze Medal.

Next is the moonshine, made with the same recipe that my grandfather taught me. Everything is hand-done on this. I grind my own corn, because this is made from 100% corn. So, this is a straight corn whiskey. Very smooth, good clean taste to it. We bottle it at 101 proof. My grandfather used to make it at 120 proof, but most people can’t handle liquor at that strength.

I entered the moonshine in the San Diego International Spirits Festival held every August here. That was the same year I won an award at the Del Mar Fair. There were 288 moonshines entered in that competition and I walked away with the Bronze Medal.

Just after I opened up and went legal, I started making bourbon. The first barrel of bourbon I ever released was a couple of years ago, and that first barrel sold out in about two months. It was a 30-gallon barrel, so, that was 150 bottles. We’re releasing our next batch of bourbon at our community party on Saturday, April 17. It’s a smaller barrel, and I have only 96 bottles of this. It’s a four-year old bourbon and it’s very smooth.

I had a customer who asked about vodka, so we started playing around vodka. I have a vodka that distilled out six times from my column still. My column still is four plates, and some distillers count every plate as a distillation. I run it through that six times, so, it could be considered a 24 distilled-out vodka. We bottle it at 99 proof.

A: Moonshine is nothing more than a straight whiskey that has not been aged. That’s what actually makes it moonshine. Any liquor, when if first comes out of the still, can be considered moonshine, until you do whatever you’re going to do – flavor it, barrel it, whatever.

A: The yeast I used is a proprietary yeast. It’s the same strain of yeast that my grandfather used. I’ve kept that strain of yeast alive for the last 48 years. Yeast has a lot to do with the flavors of the liquor. Yeast is the most important ingredient! It’s the yeast that will give the alcohol a lot of flavor. (There are more secrets to the success, but some remain proprietary.) 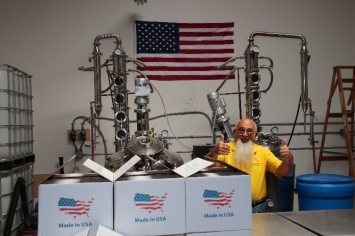 As I finished the interview and was about to leave, Mike mentioned, “You can’t write about something you haven’t tasted,” and kindly offered me samples of his brews. At first I declined, thinking to myself, I know what whiskey and rum taste like. Whiskey is whiskey, and rum is rum. I had not idea how wrong I was.

Mike first offered me his signature Uisge Beatha, single malt whiskey. Before the liquor ever reaches your taste buds, your nose is treated to probably one of the most wonderfully delightful and richly-flavored aromas it has ever enjoyed. A rich and comforting sense of walnut and smokey peat enters your nose. If I never actually sampled the drink I would have thoroughly enjoyed the experience already. But as delightful as the aroma was, the taste was even so much more pleasant. To say the whiskey is smooth is an understatement. This really is a phenomenal whiskey that I have no doubt everyone will enjoy and really should try.

There is also an Uisge Beatha infused with almonds. OMG! Such a beautiful aroma. I could just enjoy the aroma and be happy. But the flavor is even more pleasant. It smells like amaretto, but even better. Mike says it’s because of the 50 pounds of almonds he puts in each 30-gallon barrel. I believe that anyone who samples this whiskey would find it very difficult, if not impossible, to not purchase a bottle.

Next was the spiced rum, called “White Beard Spiced Rum.” There’s little surprise from where the title comes from (once you see a picture of Mike himself). It’s made, as Mike says, “the traditional Caribbean way, with molasses,” imported vanilla beans from Madagascar, and about 12 spices (Mike likes to keep his secrets). You would never guess that as smooth as this rum is that it’s actually 80 proof. It’s light, sweet and floral, just the way you would imagine and hope that the perfect spiced rum would taste like.

You can learn more about Mike Curphy Distillery at www.mcdistillery.com.

Nice event - Mike is a great guy! Wonderful interview with him here too.