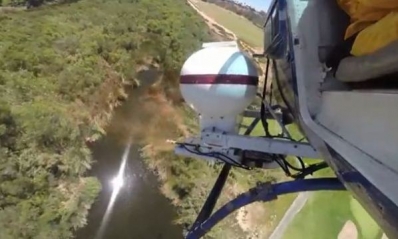 May 4, 2021 (San Diego) - With temperatures rising and summer coming, the County’s Vector Control Program is scheduled to conduct its first routine mosquito-fighting aerial larvicide drop this week on dozens of waterways to help stop mosquitoes from potentially spreading diseases like West Nile virus.

Vector Control officials are also reminding people to protect themselves from mosquito-borne illnesses by finding and dumping out standing water in and around their homes to keep mosquitoes from breeding.

The County has used helicopters to drop batches of solid, granular larvicide on 30-plus hard-to-reach rivers, streams, ponds and other waterways roughly once a month from April or May through October since West Nile virus arrived here in the early 2000s. The larvicide does not hurt people or pets but kills mosquito larvae before they can grow into biting mosquitoes.
The virus’s effect has been mild in San Diego County in recent years, with just one person testing positive for it in 2020, and three in 2019 — all of whom contracted the virus outside the county — with no fatalities. However, West Nile virus remains a potentially dangerous disease; 22 county residents tested positive for it in 2016 and two people died. Last year across California, 258 people tested positive and 11 people died.
West Nile virus is mainly a bird disease, but it can be transmitted to people and some animals like horses by mosquitoes that first feed on infected birds and then a person or animal.
The larvicide the County uses in its aerial drops does not hurt people or pets but kills mosquito larvae that eat it, keeping them from growing into biting adult mosquitoes.
Public has Important Role to Play
Protecting against mosquitoes has required more help from the public in recent years because of the appearance of a number of types of invasive Aedes mosquitoes that can potentially transmit diseases not naturally found here, including Zika, dengue and chikungunya. While native culex mosquitoes that can transmit West Nile virus breed in larger water bodies reached by the County’s larvicide drops, invasive Aedes mosquitoes prefer to live and breed around people’s homes and yards.
County Vector Control officials said the best way people can protect themselves from mosquitoes is to follow their “Prevent, Protect, Report” guidelines.
Prevent Mosquito Breeding
San Diego County residents may be more vulnerable to being bitten by mosquitoes around their homes now because many have been spending more time at home because of the coronavirus pandemic. So, remember to dump out or remove any item inside or outside of homes that can hold water, such as plant saucers, rain gutters, buckets, garbage cans, toys, old tires, and wheelbarrows. Mosquito fish, available for free by contacting the Vector Control Program, may be used to control mosquito breeding in backyard water sources such as stagnant swimming pools, ponds, fountains and horse troughs.
Protect yourself from mosquito bites
Protect yourself from mosquito-borne illnesses by wearing long sleeves and pants or use insect repellent when outdoors. Use insect repellent that contains DEET, picaridin, oil of lemon eucalyptus, or IR3535. Make sure screens on windows and doors are in good condition and secured to keep insects out.
Report possible mosquito activity and dead birds
Report increased mosquito activity, or stagnant, green swimming pools and other mosquito-breeding sources, as well as dead birds — dead crows, ravens, jays, hawks and owls — to the County Department of Environmental Health and Quality’s Vector Control Program by calling (858) 694-2888 or emailing vector@sdcounty.ca.gov. Also report if you are being bitten by mosquitoes during daylight hours, or if you find mosquitoes that look like invasive Aedes mosquitoes — small, black with white stripes on legs and backs — by contacting the Vector Control Program at (858) 694-2888.
For more information about mosquito-borne illnesses, go to San Diego County’s “Fight the Bite” website. Here are some tips to help you keep your yard from becoming a mosquito breeding ground.

Glad they're spraying. Mosquitoes and the stuff they carry can be pretty nasty. Malaria and all that. Not the first time they've done this BTW.