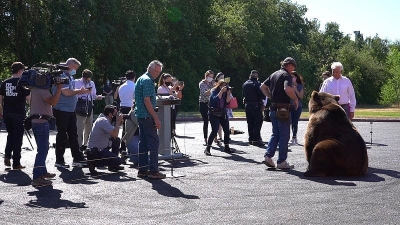 By Miriam Raftery
Photos via Cox campaign
Updated May 10 with statement/action alert from Bobbi Brinks, founder of Lions, Tigers and Bears in Alpine
May 6, 2021 (San Diego) – California gubernatorial recalls have long been likened to circuses. Now Republican candidate John Cox from San Diego’s north county has added to the circus-like atmosphere and drawn criticism from animal rights activists for hauling a Kodiak brown bear along on his campaign trail.
Cox is positioning himself as a “beast” seeking to replace Governor Gavin Newsom, whom he characterizes as a “beauty.” He touts a need for “big beastly changes” including slashing taxes.
Animal rights group PETA slammed the stunt, tweeting, “It’s shameful that @BeastJohnCox would exploit a bear for publicity. Wild animals must be left alone, not confined to a pen & wheeled out for events. They’re not props.”

Bobbi Brink, founder of Lions, Tigers and Bears, an exotic animal sanctuary and rescue facility in Alpine, sent an e-mail blast out with this action alert to her members:

"We’ve received many calls and messages regarding California Gubernatorial candidate, John Cox, who has a 1,000 grizzly bear he is toting around the campaign trail. We know better than anyone that this is not a good idea, for the animal OR the public at large. Lions Tigers & Bears has reached out to John Cox and his campaign team and offered them a visit to our accredited sanctuary while they’re in San Diego, tomorrow May 11th, so he can learn about the detrimental impacts using an animal for entertainment, and in this case shock factor, can have on exposing an animal to undue distress and inhumane treatment."

Brink adds, "Education is key here, and we hope John Cox takes us up on our offer, learns something and takes action to do the right thing.  Take to Facebook, Twitter and Instagram, and tag @BeastJohnCox and encourage him to visit Lions Tigers & Bears in Alpine, California to get educated on why it’s not ok to use a live grizzly bear for political gain."

State Senator Ben Hueso (D-San Diego) authored Senate Bill 313, which was signed into law in 2019 and bans use of wild or exotic animals in circuses. Hueso slammed Cox’s action as a “publicity stunt,” adding, "I was disappointed and appalled to see gubernatorial hopeful John Cox parade a live bear to his press conference in Sacramento.” 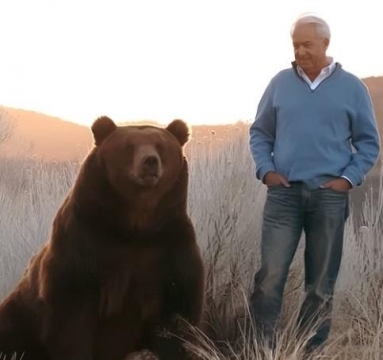 The San Francisco Chronicle reports that Cox has bemoaned media coverage of his events as “all about the bear." Despite the criticisms, he plans to continue a six-city bus tour with the bear, City News Service reports.
Other candidates running for Newsom’s seat, if the recall succeeds, include former San Diego Mayor Kevin Faulconer and transgender former Olympic athlete Caitlyn Jenner.
Newsom has slammed the recall effort as a waste of time and taxpayer dollars, noting that he is slated to run for reelection next year.

john cox is a sore loser who could only get 38.1 percent of the vote in the last election......https://www.nytimes.com/elections/results/california-governor.......hopfully he will lose again.