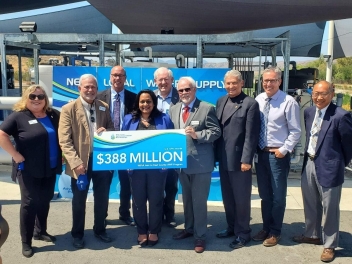 By Mike Allen
Photo:  members of AWP board with Radhika Fox of the EPA
June 5, 2021 (San Diego’s East County) -- East County’s largest infrastructure project, the Advanced Water Purification Program (AWP), got a big boost towards its completion this month when it was awarded a $388 million low-rate federal loan.
That loan approval, accounting for about half the project’s total, was sufficient cause for celebration in the form of a congratulatory press announcement June 4 at the Ray Stoyer Water Reclamation Facility in Santee, the site for the planned water purification plant.
The project that’s been in the planning stages since 2014 aims to solve the regional problem of reduced water supply and increasing costs of importing this vital resource. The solution, and one used by other Southern California districts, entails reusing and purifying sewage now being pumped out to a San Diego treatment plant before it's discharged back to the Pacific Ocean.
“We’re just taking a little shortcut, taking the water that we already have and reusing it here,” said Jack Shu, a  La Mesa City Councilman who attended the event. “It’s crazy that we have to import 89 percent of the water we use from someplace else,” he said of the San Diego region. “That doesn’t make sense.”
Actually, for those in the Padre Dam Water District, the amount of imported water is 100 percent. Padre Dam joined forces with the Helix Water District, the city of El Cajon, and San Diego County to form a joint powers authority (JPA) to create and oversee the AWP.
Now in the midst of doing all the planning and engineering for the project, the JPA is close to awarding its final package of contracts that includes the construction of the facility and the miles of pipelines.
Officially, the estimated cost for the project is $642 million, but according to the documents submitted to the U.S. Environmental Protection Agency to qualify for the Water Infrastructure and Innovation Finance Act (WIFIA) loan, the agency has authorization to spend up to $790 million.
Padre Dam officials say the amount in the loan docs is no where near what the project will cost. However, in late 2019, when the JPA announced it was applying for the WIFIA loan, the estimated cost was $528 million.
Steve Goble, the chairman of the JPA and an El Cajon City Councilman, said the cost of materials, especially for steel, is a big reason behind the escalating estimate. “Steel has gone up about 300 percent,” he said.
“I guess what you have to look at is the costs of not doing this versus what these costs are,” Goble added.
When the project is completed in 2025, the sewage now being pumped to San Diego’s Pt. Loma Wastewater Treatment Plant, about 15 million gallons daily, will be directed to the AWP plant in Santee. After undergoing four stages of purification, converting it to near distilled quality, the water will then be pumped to Lake Jennings, where it will be blended with existing water, and finally treated once more at the R.M. Levy Water Treatment Plant before it’s distributed to customers. 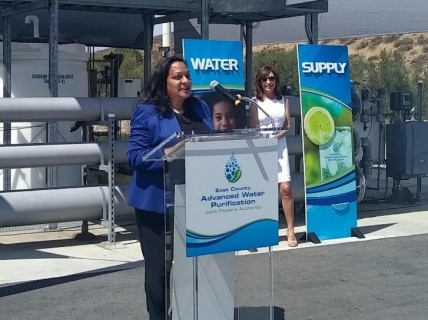 Photo, right:  Radhika Fox, deputy assistant administrator, Environmental Protection Agency
The system is geared to treat about 11 million gallons daily, providing about 30 percent of the region’s needs.
The unrelenting costs for imported water is only getting worse. Last month, the San Diego County Water Authority proposed hiking the rates it charges its member agencies by 3.3 percent due to the increased costs the CWA is charged by the Metropolitan Water District of Los Angeles. Ultimately, those hikes will be passed on to businesses, government agencies and residential customers, who all rely on safe drinking water.
The cities of San Diego and Oceanside are pursuing similar water reclamation programs. San Diego’s program called Pure Water is estimated to cost $5 billion.
At least the cost for AWP’s financing is not out of reach. For the up to 35 year term, the JPA can borrow the federal funds at 2.33 percent annually, said Kyle Swanson, the JPA’s director. He said the project will generate some 2,500 jobs, including design, construction and maintenance. Once completed, the AWP will be operated by a staff of about 40, he noted.
Goble and other officials behind AWP assert that the big costs involved with creating the reclamation system will be recouped down the road. If the numbers show otherwise, the JPA still has the opportunity to pull the plug by next February, he said.
“If it’s not a better deal for the ratepayers, we won’t do it,” Goble concluded.

"That loan approval, accounting for about half the project’s total". What is the source for the other half of the cost? Mind you, I am not objecting to saving water and recycling it. This is something that we should have been doing more of for a very long time. I am just curious where the the money is coming from.